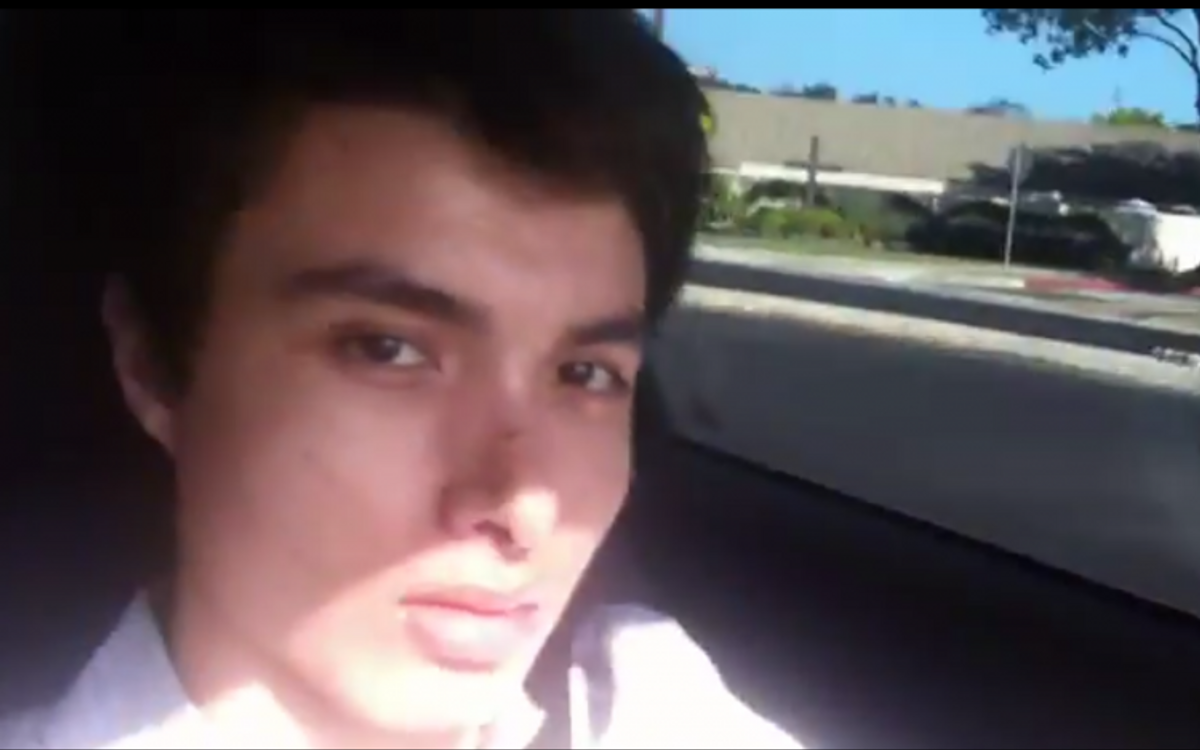 The latest shooting tragedy has happened, as we knew it would—this time a 22 year old college student in Santa Barbara who continues the pattern of young, angry and isolated men committing devastating acts of premeditated violence. All the usual issues are brought forth and held up for discussion. Mental illness. Guns. Alienation. A culture of violence. Men. Women.

All of those are important discussions, of course. As the shootings increase in frequency and grow in devastation we are desperate to figure it out. Like everyone, I’m looking for insights. What I’d like to add to this conversation is to share with you what I saw when I looked back at ALL the mass shootings over the last 32 years to see how they relate to each other. And then added to those the insights we’ve gotten about men from the conversations here on The Good Men Project.

Mother Jones, back in 2012, created a timeline that compiled mass shootings in the US from 1982 to 2012. Since then, there have been at least 8 mass shootings in 2013 and 2014, bringing the total to at least 70. The criteria Mother Jones used to define “mass shootings” (at least four or more dead) can be found here. Some similarities between the shootings are relatively common knowledge – men were all but one of the shooters. The majority were white. Average age, 35—the youngest was 11. The killers possessed a total of 143 guns between them, more than three quarters of which were obtained legally. A majority were mentally troubled and showed signs beforehand.

But there is one more pattern I’d like us to look at together. And that is the pattern about the events in the shooters lives that preceded the rampage. I’m not looking at why any one individual did what he did, and for this exercise let’s not look at personality traits or demographics—but I’d like to explore what the cultural forces that were precursors to the violence.

What I see is this. In the majority of cases, the catalyst for the shooting was something that threatened the man’s identity as a man. The main statistic is inarguable—69 males to one lone female. Being a man is the single most common characteristic of every mass shooting in the last 32 years. I’d prefer to think that men are not inherently more violent—most men do not become violent for any reason. And while biology, strength and testosterone can’t be completely discounted, I’d rather look at whether the pressures to conform to a certain type of masculinity are so strong that not being able to do so can cause a person to break under the pressure.

The idea of men going on shooting rampages because of threats to their identity as men makes sense to me. One way to think about that idea is to look at the cases where women DO kill multiple people. In the ones that make the news, most often the victims are the woman’s own children. They are not counted as mass killers because the body count isn’t high enough. But just like the breakdown in identity that I see happening with men, when the thing that defines a woman’s identity as a women breaks down (being a good mother), she—in those most extreme of cases—feels the need to kill the part of her that is causing the most pain.

And there is no doubt these killers, men and women both, are in pain. In fact, that’s why I believe the place where these shootings happen is worth looking at—they happen in schools, they happen in the workplace, in churches, at parties—the very places where the person doing killing has been in the most pain. Sometimes the killer sets out to kill specific people, but other times it is simply a desire to kill whoever is in that particular place. When you are socially isolated you go to kill in the places where people are most social.

To get these insights I went over the list of all 70 mass killings and looked for the patterns in three areas: 1) the physical locations of the shootings, 2) what we learned about the reasons and motivations for the killings in confessions, notes, interviews or videos, and 3) whom the killer targeted. This is how the numbers play out:

Targeting women and/or rejection by women 6

Politics, racism, protecting oneself against “others” 6

Let’s look at these patterns a little more closely and compare them to the conversations we have on The Good Men Project.

In at least 26 cases, immediately before the shooting event, the shooter had been fired from his job, or experienced severe financial distress, or got in an argument with his supervisor or co-worker. The shootings themselves took place at the workplace.

What we talk about on The Good Men Project often is how often men have their identity tied to financial success. Men are expected to be the breadwinner—often by society, sometimes by their spouse and most importantly, by a man himself. And a man who has set himself up as the sole source of financial security for his family—a man who defines himself in that way—breaks down when he loses his job or feels his financial security threatened.

Interestingly, the percentage of shootings that took place in the workplace was much higher before 2003—before the current recession. Before 2003, 68% of mass shootings were in the workplace, compared to only 20% after 2003. My personal belief is that the workplace shootings declined because when unemployment reached its current high, when layoffs and firings were more commonplace—because those societal forces meant it was easier for a man to lose a job and not have it be seen as the end of the world. When everyone is laid off, at least it’s no longer personal. The trend in our society to not make financial success the paramount definition of being a man is a good thing. The trend to celebrate men who are present, engaged, joyous fathers instead of the automatic breadwinner is a good thing. Not having a job be the sole source of identity for a man is a way to start to think about how we can decrease the pressures of manhood and the use of violence to overcome those pressures.

School shootings often have the least clear catalyst. What they all do have in common is that the shooters are all “coming of age” – making the transition from a boy to a man. Unlike the workplace shootings which appeared to be a reaction to one defining event—a firing, an argument, a salary dispute— the shooters in schools often seemed to consider it some sort of a “game”. That is, it wasn’t as if there was a single event that caused them to shoot up the school. Instead, the shooters practiced in advance of the shooting, strategized, played it out in their minds over and over beforehand.

Also, when looking at students who don’t snap to this degree, we often find that the masculine codes of “don’t tattle”, “suck it up”, “don’t be a baby” keep a lot of boys from seeking help. “I didn’t have anyone I could talk to. I couldn’t tell anyone.” Exclusion by peers and bullying for not conforming to accepted codes of appearance and behavior are common threads in teens who feel alienated and unable to cope.

Encouraging boys to share their feelings, telling them it’s ok to have and talk about their problems, and encouraging non-conformity might be good places to start to create positive change. Another might be encouraging friendships of both genders. Also—getting young men to practice helping others. People who help others often have the highest self esteem—because they go out and do things that are estimable.

Shootings over politics, racism, targeting of immigrants or those seen as “others”

A man’s identity is often seen as one of “protector”.

In the case of the shootings in this bucket, the men felt like they were protecting themselves, their families, or America against “the bad guys”. People in this bucket kill the people they perceive as the enemy. Sometimes we see intersectionality at work — in a few of the shootings racism was combined with problems—a workplace rant about jobs being taken over by immigrants, for example. What I see is that men feel as if they have to stand up to perceived enemies as a man.

Here again, the conversation is important. Giving people permission to talk about these issues, giving people permission to care, will help open us up to change. At The Good Men Project, we share stories of all different backgrounds and cultures in the hope that information increases understanding. We talk about the effects of propaganda, racism, and how these affect the way people view “others”.

Women or rejection by women

Yes, sexism, misogyny, inability to deal with sexual rejection, and entitlement to women’s bodies still exists. Yes, we need to deal with it.

Best place to start? Talking with and treating women as equals. Encouraging men to see women as humans first, with sex taken completely off the table. Encouraging platonic friendships between the genders where each help each other succeed. Teaching consent and respect. It seems unimaginable we are still in need of progress in this area, but we know it to be true.

Other catalysts and precursors

Other precursors to the shootings were homophobia, veteran’s issues, drug or alcohol fueled rages, faith/church shootings and child support. All of which we talk about on The Good Men Project. All of which we are trying to solve through storytelling, empathy, and understanding. Recognizing, talking about and treating addiction, exploring new directions in faith, ridding the world of homophobia, and exploring men’s roles in marriage, divorce, child-rearing and custody are subjects we talk about on a daily basis.

Finally—I don’t want to minimize the impact of mental illness. But that, too, is an issue where real progress can be made if progress is what we want to see. Men need to be able to get help for their problems without fear or shame. Emotional pain is real and devastating. Men need to understand that and they need help seeking out solutions. We need to look for warning signs and follow up immediately when we see those signs. We need to let men know it is ok to ask for help. We need to encourage friendships, sharing, and a wider, more open definition of love. We need to teach actual coping skills and actual problem solving skills to be able to deal with the inevitable loneliness, pain, anger, or lack of success that are simply parts of life. How many times have you heard some version of “just man up” instead of teaching real coping skills? And we need to continue to expand our definition of masculinity so that a man’s identity isn’t wrapped up in any one thing, but there are always a wealth of options for a long, happy productive life.

Taking out the world in a blaze of glory should be seen as the least manly thing you can do.

Let’s continue to talk about all of these things.