Paul Krugman and others shoot down an overblown "Capital" critique which misrepresents his data, findings and point 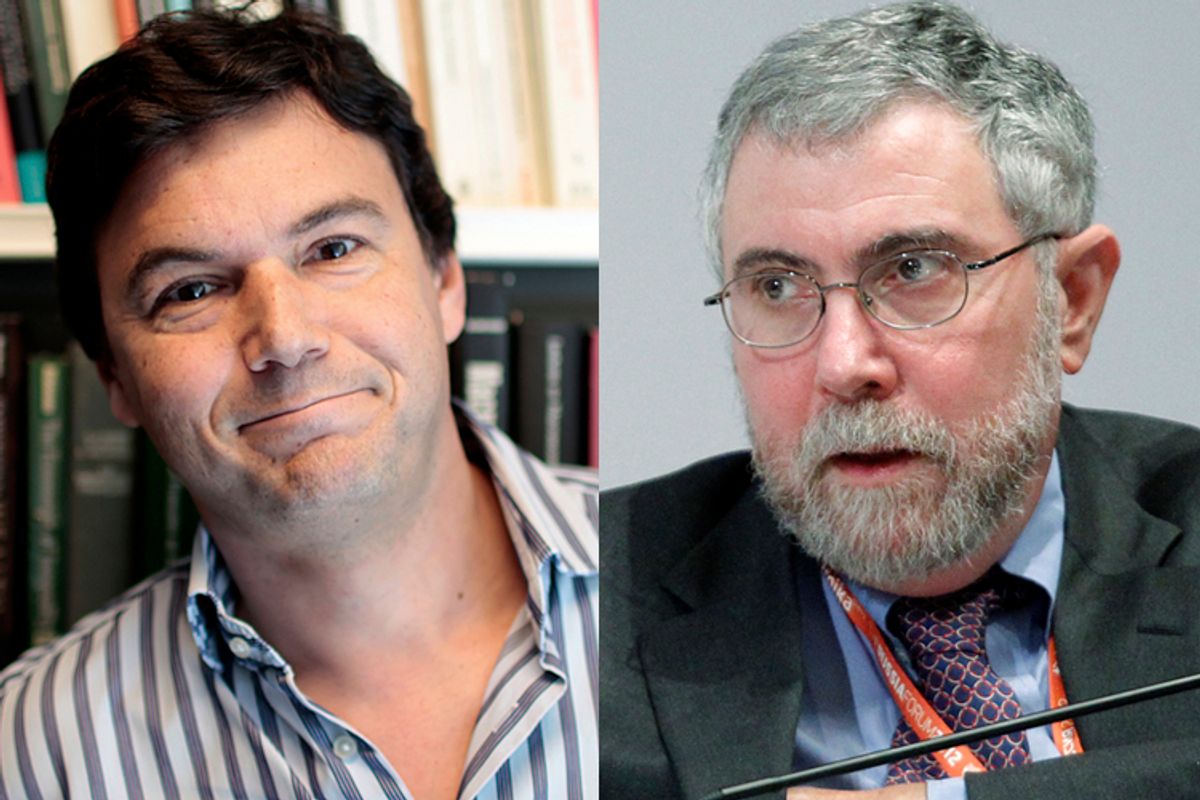 “Piketty findings undercut by errors,” the Financial Times headline screamed. And the story itself, by Chris Giles, who did the investigation, was quick to draw an odious comparison:

The data underpinning Professor Piketty’s 577-page tome, which has dominated best-seller lists in recent weeks, contain a series of errors that skew his findings. The FT found mistakes and unexplained entries in his spreadsheets, similar to those that last year undermined the work on public debt and growth of Carmen Reinhart and Kenneth Rogoff.

But, somewhat typically, Oxford economist Simon Wren-Lewis, at his Mainly Macro blog was not impressed:

Wren-Lewis's response to the exposure of Reinhart and Rogoff's errors was remarkably consistent, “as someone who has in the past done plenty of empirical work, my overriding reaction is empathy with the researchers concerned,” so he wasn't being partisan or ideological. The fact is, various sorts of math errors in economics are disturbingly commonplace, as economist David F. Ruccio noted:

...a friend in graduate school, who already had a Ph.D. in mathematics, took it upon himself to work through the mathematics presented in the tenth edition of Paul Samuelson’s famous "Foundations of Economic Analysis." He told me he was amazed to find more than one hundred mistakes in the book, even after so many editions.

Bottom line: what matters for economists professionally isn't errors—everybody makes them—but how truly damaging they are to a larger work, and how you handle them. This is not, however, what matters to the media and policy world, where narratives are king, and the supposed equivalence between Piketty and Reinhart-Rogoff is a prime example of the powerful forms these narratives take. Yet, as we'll soon see, the two cases are dramatically different.

First, however, we need a better sense of why the Financial Times' reporting is overblown. Paul Krugman blogged a quick-and-dirty big-picture response. He quoted from the Financial Times blog—where Giles presented his findings in detail—the claim that “wealth concentration among the richest people has been pretty stable for 50 years in both Europe and the U.S.,” and notes, “OK, that can’t be right — and the fact that Giles reaches that conclusion is a strong indicator that he himself is doing something wrong.”  He's not that familiar with Europe, Krugman admits, “but the notion of stable wealth concentration in the United States is at odds with many sources of evidence.” Krugman cites a CBO study on the distribution of income showing increased concentration from 1979 to 2007, noting that it's “just not plausible” that this income concentration doesn't reflect a roughly similar concentration in underlying wealth as well. He also pointed to new research from Emmanuel Saez and Gabriel Zucman (presentation here) showing a “large increase in top 0.1 percent wealth share since 1980s” and even larger increases for the top 0.01 percent.

While Krugman went for the big-picture problem with the Financial Times's approach, a number of other commentators dove into the details. A lucid summary of the sorts of things they initially found came from Matt O'Brien at Washington Post's Wonkblog, where he organizes the criticism into three broad categories. First are simple transcription errors, which are embarrassing, but not consequential, leaving the overall story basically unchanged. He uses FT's own chart of Swedish wealth concentration comparing Piketty's data with FT's corrections to show at a glance how little difference is made. Second are “methodological concerns,” as O'Brien describes them:

Giles thinks Piketty should average European data by population, not by country. He doesn't like that Piketty draws trends between large gaps in the numbers. Or that Piketty labels data from, say, 2004 as "2000" on some of his charts. And Giles isn't sure why Piketty has put together some of his wealth data—which is sparse, and needs to be adjusted, if not constructed—the way that he has. But these aren't errors. They're questions. Ones that Piketty should answer, but still just questions.

This can't be stressed enough: Methodological questions are important, to be sure. But they should not be confused with outright errors—and Financial Times reporting has sensationalistically combined the two. Errors need to be corrected, and raise questions about the works they appear in. But methodological questions need to be understood, studied, discussed—all of which are undercut by misleadingly blurring the lines between straightforward errors and significant questions of method.

Finally, O'Brien says "the most significant" problem is that of the UK wealth data, already mentioned by Wren-Lewis above.  More on this shortly.  However, after laying these out, O'Brien concludes:

But this doesn't seem to be a Reinhart and Rogoff situation. Their Excel errors really did change  their conclusions. Piketty's don't. Unless, like Giles, you average inequality by population instead of by country—which is debatable, at best, since Piketty is only concerned about inequality within countries.

This is a crucial point, obviously: Reinhart and Rogoff's argument that high debt causes slow growth was always a correlational one, subject to confusing cause and effect. Beyond the headline-grabbing errors, once their data was analyzed more critically to distinguish cause and effect, the causal role of high debt disappeared completely. Despite the Financial Times' headline, this hasn't happened with Piketty.

But there are other differences as well. For one thing, Reinhart and Rogoff were quite reluctant to share their raw data. Piketty has gone out of his way to share his, publishing it online. That's why the Financial Times was able to find fault with his data so quickly. Reinhart and Rogoff said one thing to other economists—stressing that their findings only showed a correlation—while giving a green light to politicians to assume a causal relation. Piketty hasn't played such games.  And, of course, politicians continue to act on the basis of Reinhart and Rogoff's disproven thesis, while none have yet even stirred to act on Piketty's.

In short, the narrative attempt to equate Piketty and Reinhart-Rogoff is yet another example of lazy, both-sides-do-it journalism.

But that's not the end of it. Remember I promised more on matter of UK wealth data? Well, on May 27, Carter Price, a senior mathematician at the Washington Center for Equitable Growth took sharp exception to the Financial Times narrative:

While it is clear that Giles spent some time looking over Piketty’s spreadsheets, he jumps to conclusions that are not supported by the points he raises.

Indeed, my examination of Giles’ analysis and the spreadsheets that Piketty provided to the public indicate that perhaps the key claim by Giles is erroneous. Giles bases his argument that there was not an increase in wealth concentration in the United Kingdom but rather a decrease on a single data point from a 2010 wealth survey in the UK. Because that survey did not exist in 2000, it cannot be directly compared to other time series data without harmonization. The entirety of the drop Giles claims is occurring can be explained by switching from one survey to another....

Giles uses the raw, non-harmonized wealth data to claim that wealth inequality in the United States has been flat and that it has been decreasing in the United Kingdom. Yet by combining these non-harmonized data sets, Giles is comparing apples to oranges. To say that this deviates from best data practices would be an understatement.

To be fair, Price also notes that the entire field of wealth analysis over time is a difficult one precisely because the data is so fragmentary, and requires so much work to create plausible apples to apples comparisons.  This is Piletty's speciality, but it doesn't mean he's free from criticism. It does, however, help us see this particular claim about UK as being yet another methodological question.  So perhaps the three categories of criticism O'Brien found are only two categories, after all.

Yet, in a sense, all the above is beside the point, as Mike Konczal explained at his Rortybomb blog, in a post titled, “The FT Gets Piketty's Capital Argument Wrong.” Simply put, the core argument of "Capital in the 21st Century" is that capital's share is growing relative to labor. The concentration of ownership within the sphere of capital is a secondary concern. As Konczal explains:

He went on to break Piketty's argument down into four falling dominoes:

1. The return on capital is greater than the growth rate. The infamous "r > g" inequality. Meanwhile growth begins to slow, perhaps because of demographics.

2. The amount of capital, or private wealth, relative to the size of the economy will begin to grow rapidly as growth slows. This is the “past tends to devour the future” line. The size and role of wealth of the past will take on a greater relevance to the everyday economy.

3. If the rate of return doesn't fall, or doesn't fall that quickly, the capital share of income will increase. More of our economic pie will go to people who own capital.

4. The ownership of capital is very concentrated, historically and across a wide variety of countries. It is unlikely to fall quickly, much less spontaneously democratize itself, in response to these trends. So the income and power of capital owners will skyrocket.

Increased income inequality enhances—or, rather, exacerbates—the dynamic of the last domino, but it's not the essence of it.  In short, it's the Financial Times itself that's made the most fundamental error here, mis-stating the basic facts of the debate.

Of course, they've still done us all a favor by discovering some errors, and raising some issue that need further clarification. But at the same time, they've further misrepresented what Piketty's central argument is, and why the data he's amassed matters, even with its imperfections still being worked on. And now, of course, the real data-haters will have a field day as a result.