"Are you a boy or a girl?": Our trans-bisexual love story

She and I didn't fit in traditional categories, but we found a common place in between 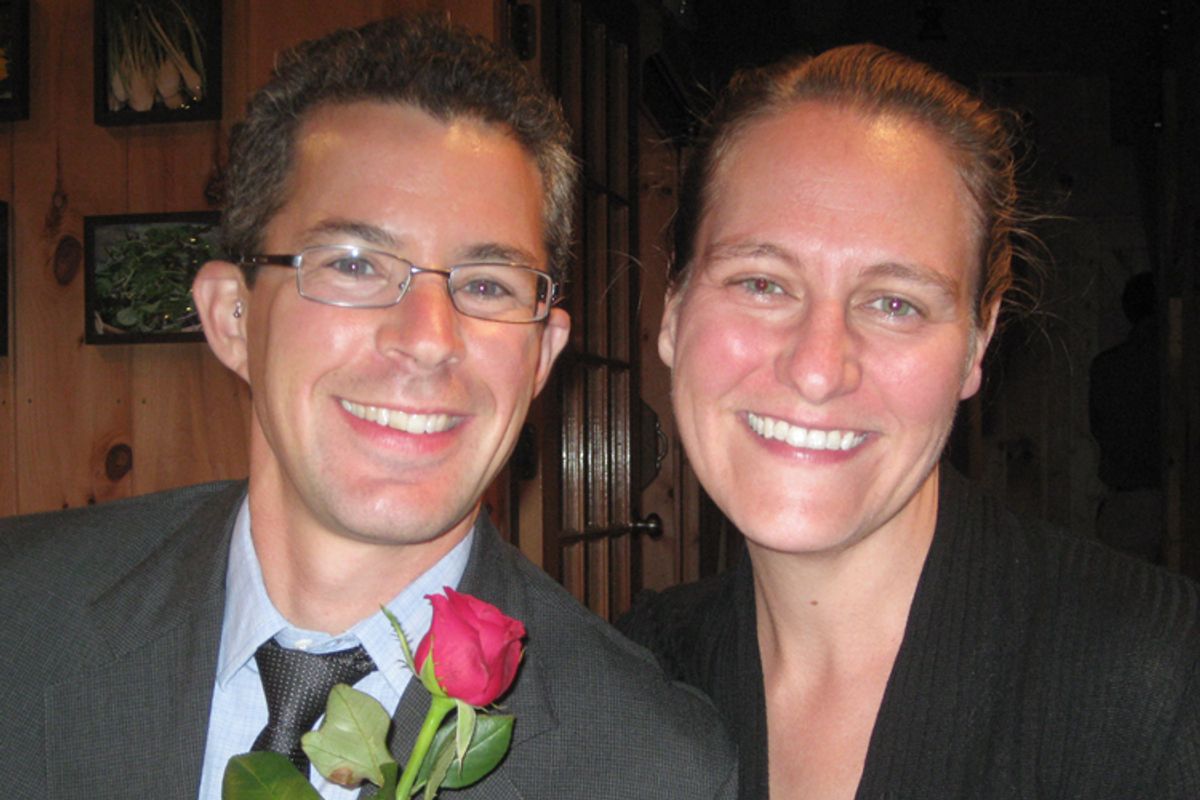 A photo of the author with his wife, Ilona.
--

“I don’t mean to be rude, but I’ve been watching you, and I’m trying to figure out: Are you a boy or a girl?” she asked.

Those might not seem like the most auspicious lines with which to begin a relationship, but there we were, leaning over the stern railing of a ship that was slowly circling the Boston Harbor.  It was a no-booze, creative-black-tie fundraiser for a queer youth group.  Bass thumped from the dance floor and pastel lights strobed out into the twilight.

I knew why I had fled to the back of the boat: I was tired of being on the margins of the dance floor.  Not that the space was unfamiliar.  I had occupied the margins of every dance I’d ever been to, most of which were in rural Maine.  There, I’d grown up as a tomboy named Alice, known as Al to my friends.  School dances were painful, especially by the time I reached eighth grade and had grown aware of the fact that I was attracted to girls not boys – a fact that others, based on the names they called me, had cottoned to much earlier.

Here, on this slowly circling boat, I thought the dancing might go better.  I was no longer Alice, and I wasn’t trying to negotiate the feelings I had for women.  Now 17, I had just come out as transgender, cut my hair short, and changed my name to Alex. But on the dance floor, I stuttered between groups.  A gay boy asked me to dance – we stepped to the floor and, over the din, I explained my newfound identity to him. “OK, see you around” was his reply.   I danced in a circle of lesbians, swaying to the beat.  I had been one of them at the start of the summer, when I joined the youth group. They’d watched my transformation into transgender, into this proto-guy, into whatever I was.  I wasn’t one of them.

The two of us leaned over the railing and watched the wake of the boat churn out and she told me her name, Ilona, and began to explain her own coming out story. “I think of myself as bisexual,” she said, “though I’m mostly interested in women. Bisexuality is a strange place to inhabit.”

Bisexual. In the queer youth community at the time, there was the joke: “bi now, gay later.” Bisexuality was the gateway identity, easier to say to someone than lesbian.  It was being gay with an exit strategy.

I nodded. I knew all about strange places to inhabit, and I explained how I had just come out as transgender.  “I want people to refer to me with masculine pronouns, but I don’t want surgery or hormones.  I’ve always felt like a guy and I want to live out those feelings.”

I remember her dangly earrings, her round glasses. I remember learning that she was supposed to have gone on the cruise with a group of friends, but they’d bailed at the last minute. I remember being glad for that – there was no one to pull her away from the conversation with me.  The boat went around and around and we spoke with the tangled intensity that only just-come-out queer kids can muster.  Both of us confused, knowing what we felt, but not able or not willing to put words to it, not sure what it implied.

Mostly, I remember both of us being certain that we would figure things out.

She went to college in Boston, and I went to high school in New Hampshire, and we settled into a comfortable friendship, writing letters in those pre-email days, and meeting up as our school schedules allowed.  When, the following year, I started college in Boston as well, we saw a lot more of each other, but by that time we were dating other people.

My girlfriends of those years were either straight women for whom I was the first non-guy (except I was a guy, kind of, in some ways) they’d dated or lesbians who were comfortable with my identity as trans – so long as that meant not-quite-a-guy-completely.  When these relationships ended, my exes mostly went on to date women; I wasn’t sure what that meant about me.

In those years, I worked on gender the way a bodybuilder works on biceps.  Consistently, persistently, perhaps vainly, and sometimes to the annoyance of others.  I tried living as a man and not telling anyone I was transgender. I tried the whole third gender/no-gender thing.  I thought about hormones and surgery. I couldn’t decide if I was trying to be myself or trying to be someone else.

As for Ilona, she dated mostly women and most of those women identified as lesbians. Some vehemently so.  I recall stopping by the communal house where she lived – picking her up so we could go for a hike in the Blue Hills – and falling into a conversation with a friend of her then-girlfriend.

“What is the difference between you and me?” had been the woman’s opening salvo.  We’d met before, so I guess it was acceptable to dispense with pleasantries.

I knew what she meant. I’d had this conversation with other lesbians and with myself.  “Biologically, genetically, none,” I replied. “But I’m a guy. I’ve always felt that way.”

“Yeah, when I was kid, I wanted to be a boy, too.” She paused to let the implication sink in: She’d grown out of it. “It must make life easy,” she finally said.

“I’ve actually found that being transgender complicates things quite a bit.”

I opened my mouth to rebut this statement, but Ilona emerged from her room.  “Ready to go?”

Now, I wonder why it took us five years after that initial meeting to finally begin a relationship with each other.  I’d just moved from Boston to Providence to start graduate school.  New places are hard on anyone, I know, but beginning in a new spot as a transgender person has the added agony of negotiating the coming out process.  When to tell people?  Surely, not the first time we meet, but surely not too long after?  And what to tell them, exactly?  That I was man … that I had been raised as a girl, but was a man now … that I was biologically and genetically female, but identified as …

Ilona showed up at my new apartment, and we spent the day exploring neighborhoods, walking around in search of a good cup of coffee.  In the evening, I cooked dinner while she played with my new kitten. We talked endlessly. It was the conversation of people who knew each other deeply, where no explaining is necessary.

“For a while this summer, I was really drawn to this guy,” she said, “the first guy I’ve been attracted to in years, and I’m not sure I want to be in a straight relationship.”

“Would it be straight? I mean, if you’re bisexual, then can you be in a straight relationship?”

We mulled this for some time.  The same old questions for her.  And the same ones for me. “I can’t decide why I should come out to people if I’m passing as a guy.  Why do I need to tell them I’m transgender?”

“Because that’s who you are,” she replied.

“Is it? Is transgender the end point? Or is being a guy?”

How funny. We were right back on that boat, circling around.

“There isn’t anyone who understands me as well as you do,” I told her.

“Then what the heck are we doing dating other people?” she replied.

That years-ago summer, at 17 and 19, we thought we would figure it out.  We were on the cusp of something, on the verge of becoming ourselves.  We had leaned over the stern railing and said, thing weren’t clear now, but they would be.

Instead, I’ve discovered that gender identity is, for me, never resolved, never clear. I am and am not a man. I am transgender. I am very sure of this and not at all sure what it means. The same is true for her with bisexual identity. Bisexuality is not a corridor through which one moves from straight to lesbian (or vice versa). It is a constant both-ness that can sometimes feel like a neither-nor proposition.  It is both something and nothing.

We were both clear on one thing, though: In order to be happy, you had to find someone you loved who also loved the ambiguity.

We’ve been married for 11 years now. It is a marriage twice sealed. We had a same-sex civil union in Vermont. That was annulled when I changed my birth certificate to male. So we went back to Vermont and got married again. It’s nice to have the paperwork, I suppose, but I think that in some way we were bound to each other in that long-ago moment of understanding and openness, when we were both trying to figure things out.  We’re still working on that.