In the future, insurance companies will make sure that you exercise 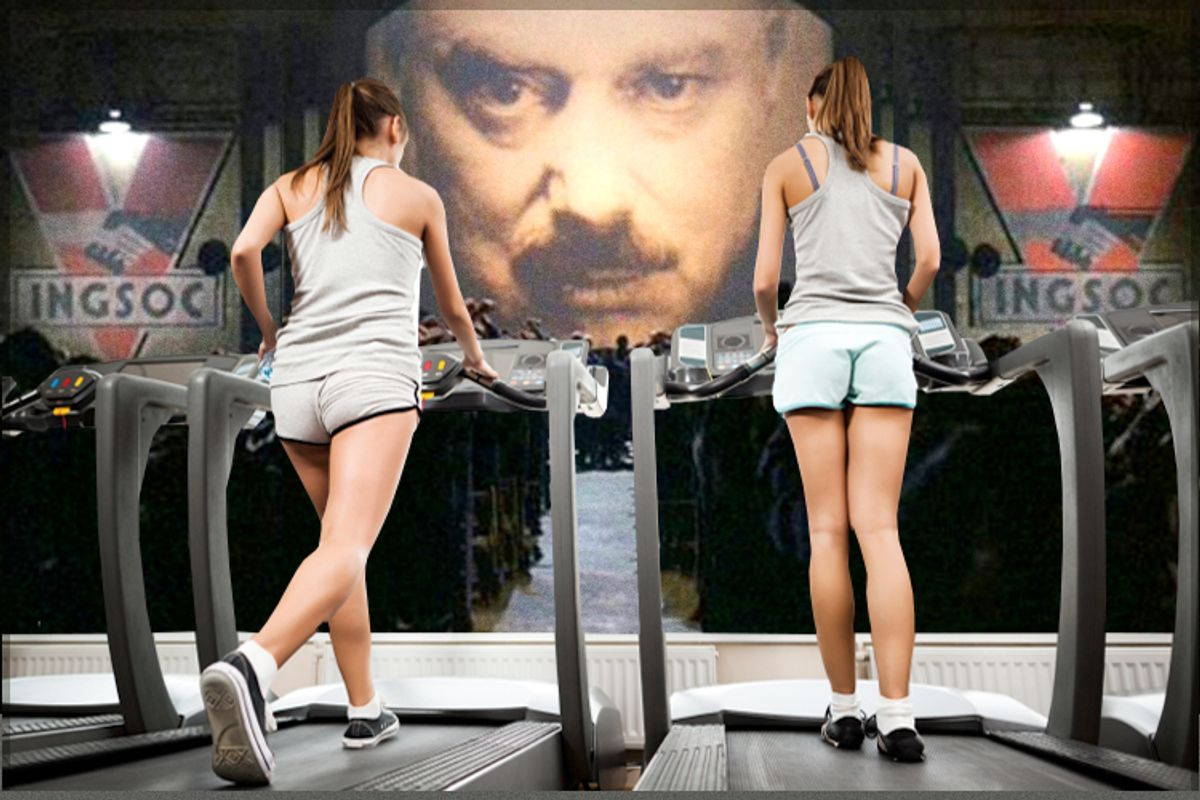 Imagine this scene: You go to the kitchen for a beer, but your home has automatically locked the fridge; a text explains that you've already exceeded your calorie count for the day. You consider driving to a bar, but the beer you already drank sets off your car's alcohol sensors: Driving privileges revoked! You decide to fire up the BBQ, but the gas line to your grill has been shut off -- likely because you set off your smoke alarm twice this week while frying bacon. In the future, you can't hide from the Internet of Things.

The Internet of Things is a venerable (in Internet time) catchphrase commonly used to describe a universe of connected hardware devices all talking to each other. In your home, for example, your fridge, your coffee maker and your baby monitor will all be two-way "smart" devices -- configurable from afar and constantly transmitting data back into the cloud. Want to turn up the heat before you get home from work? No problem!  Curious about your energy consumption habits? Google will help you analyze the data! But that's just the beginning.  The Internet of Things will also be wearable -- full of fitness trackers and smart-watches and Google Glass-style devices that keep tabs on your health and whereabouts. The Internet of Things is already in your car, if you happened to have purchased one recently. Just Google the word "telematics."

Hype over the Internet of Things has been flowing out of Silicon Valley for at least 15 years, but this week the rhetoric bumped up a couple of notches, after a rumor made the rounds that Apple is planning to roll out a new software platform that will turn your iPhone into a remote control for each and every device in your house. More than one industry analyst interpreted the purported move as a strategic response to Google's  $3.2 billion acquisition in January in cash for Nest, the "smart" thermostat and smoke alarm maker -- a move that many took as a sign that the Internet of Things was finally upon us.

(Silicon Valley and San Francisco are already getting their own dedicated cellular network, just to accommodate the tremendous outgrowth of traffic that such "things" might require.)

The Silicon Valley utopians tell us to get ready for a glorious future in which our "things" figure out what we want before we know we want it. Our thermostats will "learn" when we typically get up in the morning and automatically turn up the heat. Our fitness trackers will count the calories we consume and burn, watch our heart rates and make sure we're sleeping right. Our cars will know where the nearest highly rated restaurants on Yelp are or whether we're getting sleepy behind the wheel. Per this vision, the Internet of Things will work for us, enhancing the safety and quality of our lives.

There are qualms, of course. For one thing, the Internet of Things is eminently hackable. (Do we really want Internet script-kiddies with the power to turn off our refrigerators, jack up our thermostats or verbally abuse our families through the baby monitor?) But that's just surface distraction. There's a much deeper problem with the Internet of Things: It won't be deployed merely to work for us. It will also be deployed to control us.

Why? Because that's how the next generation of insurance companies is going to turn a profit.

The Internet of Things is poised to become the most efficient tool ever invented for helping insurance companies figure out potential risks, adjust their premiums accordingly, and reward -- or punish -- us for straying beyond the bounds of properly prescribed behavior.

Your smoke alarm went off three times this month? Your home insurance provider is not going to like that. You typically drive 10 miles faster than the speed limit in residential areas? Expect to get a rap on the knuckles from Geico or State Farm. You stayed in all weekend sucking down beers? Your healthcare insurer will not be pleased.

That's the future promised by ubiquitous connected devices -- a future in which insurance companies know everything about our lives, and have extraordinary powers to use that information to influence how we live.

"Insurance is going to be the native business model for the Internet of Things," said Tim O'Reilly, founder and CEO of O'Reilly Media at a conference in San Francisco last Thursday.

In other words, the real money to be made from the Internet of Thing won't be coming from the sale of hardware devices. It will come from exploiting the data gathered by those devices. And if what O'Reilly is suggesting turns out to be correct, then the most avid consumers of that data will be insurance companies themselves.

That name of the insurance game is all about properly assessing risk. Are you a safe driver? A responsible homeowner? Do you take good care of your body? How long are you likely to live?

Want to buy auto insurance? First thing your provider will do is check to see how many speeding tickets and other traffic violations are on your record. Do you live in a flood zone or area prone to earthquakes? Your house insurance premiums will be more expensive (if coverage is available at all). And prior to the passage of the Affordable Care Act, preexisting health conditions meant you could just forget about getting any kind of reasonably priced health plan.

Whichever company assesses risk the most accurately and prices its coverage accordingly makes the most money. What the Internet of Things promises in that regard is access to a vastly expanded universe of data that can be applied to creating "risk profiles." The Internet of Things will enable a new kind of redlining. Discriminating against your race or location will be replaced by discrimination tied to the data you generate.

This is already being implemented in auto coverage, through so-called pay-as-you-drive plans that monitor your vehicle usage though information transmitted directly back to your insurance provider by technology incorporated in your car. We're going to see a lot more of this, for obvious reasons.

(And, to be fair, that's not necessarily a bad thing -- if the Internet of Things knows when you're too inebriated to drive, for example.)

It's easy to see how the same principles could also be applied to home insurance. Google, through Nest, will eventually have access to all kinds of information about what kind of homeowner you are, giving it a tremendous amount of power. It may choose to sell that information to home insurance companies, or could even decide to get in the insurance game directly itself. Like the music and publishing and hotel and taxi industries before it, the insurance industry may just be next on the list of "about-to-be-disrupted" business sectors.

But the most interesting, and potentially creepy, application of the Internet of Things is as it applies to healthcare: Insurance companies could start offering discounts to people who kept their calorie intake within prescribed limits or exercised each week along prescribed parameters. And they'll know when you break the rules, because a condition of those discounts will be constant monitoring via fitness trackers.

There's all kinds of nightmare scenarios to consider once you invite Hal into your kitchen. Sorry, Dave, you've hit your two-beer maximum, so I'm locking the refrigerator. No more fried chicken for you until you've ridden 20 miles on your bike. The Internet of Things will be a Panopticon that has been enabled to do more than just watch. (And if you really want to freak out, well, how about brain implants designed to treat psychiatric disorders?! The Internet of Things in your brain!)

According to one observer, the healthcare industry may even be required to start incentivizing specific behaviors through technology by provisions built into the Affordable Care Act. "Outrage over NSA spying on Americans is nothing compared to how people may react to the upcoming collision with wearable computing, medical privacy and new insurance rule," wrote Seattle Times technology correspondent Brier Dudley.

Not everyone wants to have a little computer on the wrist or head keeping track of what a wearer does around the clock. But I wonder if they won’t have much choice in the future, under new insurance laws that invite companies to scrutinize and monitor their employees’ health and fitness...

The Affordable Care Act now lets employers charge employees different health-insurance rates, based on whether they exercise, eat healthful foods and other “wellness” choices they make outside of work.

Employees (and insured family members) who don’t submit to the screening and participate in wellness programs face steep penalties; they may have to pay up to 30 percent more for their share of health-insurance costs. The law calls this a “reward” for participation. Flip it around and it’s a penalty for not authorizing your employer to manage and monitor how you live outside of work.

Dudley isn't the only person who has noticed a potential connection between "wellness programs," the ACA and fitness trackers. For fitness trackers to work most effectively, they will need incentives.  It's not hard at all  to imagine a future in which your employer tells you your healthcare insurance is contingent in participating in a "wellness" program that requires active monitoring.

Of course, healthier lifestyles should be everyone's goal. But what level of micromanaging are we willing to endure in exchange for insurance security? The prospect of an Internet of Things-enabled insurance future raises all kinds of thorny questions. For example, the Affordable Care Act is supposed to end the practice of healthcare insurers' discriminating against people with preexisting conditions. But wouldn't mandatory wellness programs be a kind of discrimination against people with unhealthy lifestyles?

In every realm of insurance, how long will it be before discounts offered for "good" behavior are matched by price hikes that penalize "bad" behavior? Liberals scream bloody murder when conservatives try to make welfare programs contingent on drug-testing. How different will it be when we run the risk of higher health insurance premiums because we ate too many potato chips?

The connected society is coming. In a best-case scenario, perhaps, as a society, we'll be able to draw lines between what is acceptable surveillance and what isn't. But before we can do that, we need to constantly be asking an important question every time we hear about what the Internet of Things will do for us. What's in it for them?