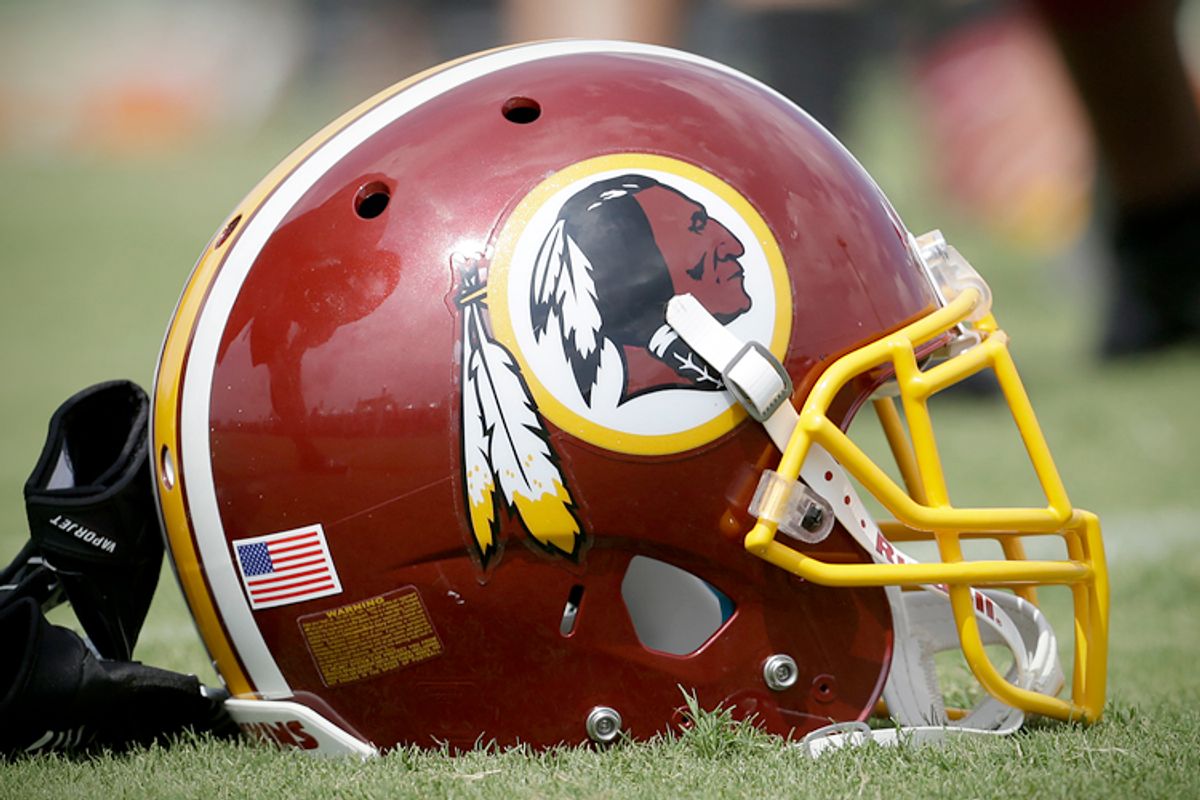 Last week, 50 members of the Senate signed a letter to NFL commissioner Roger Goodell urging him to endorse a name change for the Washington Redskins. It cited NBA commissioner Adam Silver's harsh response to Clippers owner Donald Sterling's racist comments as a model. "What message does it send to punish slurs against African Americans," the letter said, "while endorsing slurs against Native Americans?" The letter wasn't circulated among Republicans, and only five Democrats -- those from red states and/or ones who get campaign checks from team owner Daniel Snyder -- didn't sign.

The Redskins organization did not care for this fiery missive. Team president Bruce Allen sent back a letter of his own to Sen. Harry Reid citing all sorts of CONCLUSIVE evidence that the term "Redskins" isn't racist even though it is instantly recognizable as racist. For example: It is actually a term of Native American "solidarity," not a dictionary-recognized slur for people against whom a genocide was committed. Allen's letter also says that most Native Americans actually love the use of a slur as a team name and that a Native American drew the logo. In all instances, Allen uses the term "Native Americans" to describe the persons under discussion. By his own logic, this is the height of insensitivity. If Allen meant to connote honor and solidarity!, he should have referred to them as "redskins." But it just sounds bad when it rolls off your tongue, doesn't it, Bruce? Maybe that's a problem.

The real action since the senators' letter, though, has been on the team's Twitter feed, which has ramped into high gear alternately to defend the name and show off its cheerleaders' boobs.

The team has retweeted a Washington Times article about how Harry Reid is the Real Racist. It has noted that Sen. Maria Cantwell's high school also uses "Redskins" as its mascot (as though Cantwell thinks that's OK and is a hypocrite, or something). The team got a bunch of its players to retweet Bruce Allen's dumb letter. What else? Hmm ... a billion more photos of cheerleaders in bikinis ... oh, and how can we forget the tweeted screen grab of a New Republic quote in which "Jeopardy" host Alex Trebek states that he has no problem with the team name? That should appeal to the millions of Americans who defer to a syndicated quiz show host for matters of great moral import.

Which brings us to yesterday's glorious social media moment, in which the Redskins' bang-up crew of Twitter monkeys decided that this would be a good idea:

The team did get at least one intended response, from a man who lives in Washington, D.C., but pledges not to vote for Harry Reid if he changes the name? There are all sorts of problems with that statement.

If the Redskins ownership and management really do intend to refuse any consideration of a name change, and follow through with this plugged-ear *NOPE SORRY CAN'T HEAR YOU LA LA LA* routine to the bitter end, they shouldn't even bother trying to "persuade" people through a social media campaign about how this obviously racist word isn't racist. Just keep your mouths shut and pretend the controversy doesn't exist. That's what I would tell them if I were Lanny Davis, but I hope never to be Lanny Davis.

Another thing the Redskins could do is just change the fucking name. From a P.R. standpoint, it would end the controversy once and for all. From a basic human decency standpoint, it would be the right thing to do. So why don't they? It's hard to imagine that Dan Snyder and Bruce Allen are as wedded to this slur as the only suitable moniker out there. The problem is a name change would be a direct admission that they owned and ran a franchise with a racist name for years. Denial will work for a good long while. Until it doesn't.