Shut up, Matthew Weiner! Why our TV masterminds should stop explaining their shows

From "Mad Men" to "Breaking Bad," show runners who talk too much are ruining our prestige dramas 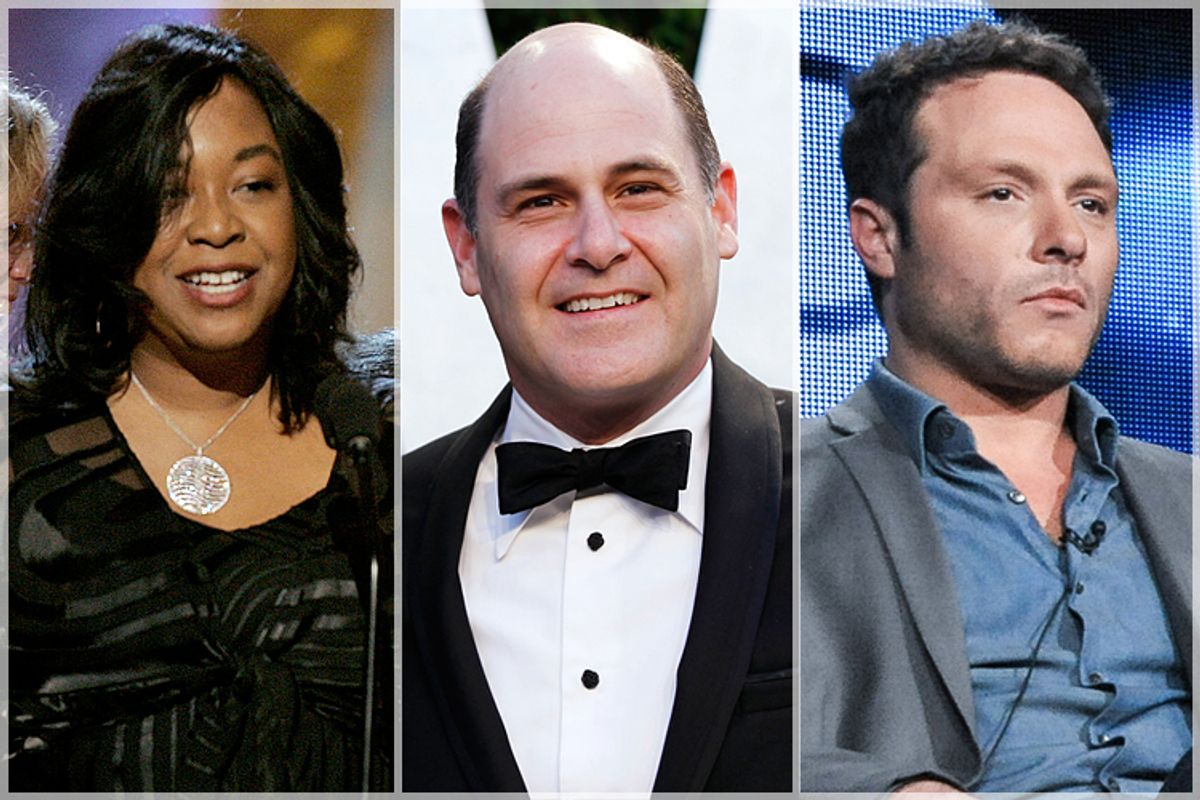 Matthew Weiner must be doubly exhausted -- not merely did the first half of the final season of his show "Mad Men" just end last Sunday, but so too did his annual press tour, which sees Weiner stopping by various outlets and explaining What It All Meant to an audience he's eager to correct. Remarking to Vulture upon the debate as to whether Don seeing Bert Cooper dancing in the office was a sign of Don's own collapsing mental state, Weiner said:

I'm not going to pass judgment on people who have never had the experience of seeing something that's not there or who want to define the language of the show. That is the language of the show. Don has an emotional moment realizing that he's lost Bert. [...] [Don seeing dead characters has] a long history in the show and it's not always drug-induced or anything. That's the miracle of telling a story in film: You can express something inside someone's mind.

But the "miracle of telling a story in film," too, is that each viewer's mind sees things differently in the absence of definitive proof. "Mad Men" fans might have had "Is Megan Sharon Tate?"-style fun with this debate while waiting for the next batch of episodes. Instead, Weiner stepped in to shut it down.

Weiner, who does much of his spilling in traditional outlets like the New York Times, legacy print magazines (and their websites) and NPR's "Fresh Air," isn't the only overly gabby show runner. The explosion of forums in which TV is discussed these days -- after-shows, freestanding recap sites, podcasts, Twitter -- means that show runners have more opportunities than ever to talk shop. And barred by their networks from sharing juicy behind-the-scenes details, show runners wander into the same chatty plot exegesis and character analysis that the rest of the Internet is already engaged in -- jumping into the very critical fray stirred up by the shows they've created.

Before Walter White's body had gone cold, Vince Gilligan was on AMC's chatfest "Talking Bad," breaking down what various components of the final season had meant. No need to speculate about why Walt put his watch atop that pay phone, fans; Gilligan explained that they were simply forced to include that moment because a scene filmed earlier -- meant to happen later in the chronology -- featured Walt sans watch. And Nic Pizzolatto's penchant for analyzing his own shows hasn't ended with the first season of "True Detective"; he's still out there giving hints about the next go-around, suggesting that it will feature three leads and responding to critical speculation about the meaning of certain scenes. Show runners have even been known to spoil their own shows -- as when Nic Pizzolatto poured cold water on fan theories about the "True Detective" culprit, or Shonda Rhimes, who has a voluble Twitter feed, accidentally dropped a spoiler for a future episode of "Grey's Anatomy" by tweeting a photo  revealing that a character left for dead in a previous cliffhanger had in fact survived. And Robert and Michelle King, the show runners of "The Good Wife," took to CBS's website to share their thinking about killing off Josh Charles' character, Will Gardner, last season.

So much for letting us connect the dots ourselves -- the "death of the author," and all that. It's not that show runners ought to remain silent and reclusive -- for one thing, the popularity and long-term viability of their shows could suffer if these creators closed themselves off to all the media opportunities out there. Doing interviews isn't, at this point, a luxury; it's part and parcel of the publicity apparatus that keeps fans hooked. But Weiner's doing far more than his duty -- he's often dictating exactly what to think and telling us how to watch his show.

Similarly, "The Good Wife" viewers were shocked at Will's death, but the pleasure (such as it was) of that shock was dulled by the Kings' public parsing of every option they'd considered to accommodate Charles' desire to clear his schedule. Sure, it was public information that Charles wanted to leave the show and the Kings had to work around it -- but still their utilitarianism sapped some of the emotional jolt.

David Chase, of "The Sopranos," is famously withholding with the press; he has still not confirmed whether or not Tony died in that diner. "We always operated as though people don't need to be spoon-fed every single thing — that their instincts and feelings and humanity will tell them what's going on," Chase told Entertainment Weekly in 2007, the year "The Sopranos" ended. By now, "The Sopranos" is far from the only show appreciated for its web of allusions and subtleties, but Chase is one of few creators who have resisted the urge to unpack those subtleties for clamoring fans. There are different modes of over-engaging with viewers: Rhimes seems to interact with fans for the fun of it, the Kings respond overzealously to fan anger, Weiner and Pizzolatto can seem like frustrated teachers correcting slow pupils. But the end result is the same: As creative voices intoning from on high, show runners' media appearances end up distracting us from the shows themselves -- larding on an added layer of self-awareness that strips away some of the immersive magic.

Recap culture most likely isn't going anywhere, and it even presents an exciting opportunity for show creators to play with the consequences of audiences' hyper-engagement. This is what the new season of "Arrested Development" did by embedding all its easter eggs of inside jokes and references -- which were eagerly devoured and discussed by fans. But if show runners are going to keep making themselves available to the media, they'd be wise to remember that, once a show is on the air, it's mostly out of their hands. With seven episodes left to air, "Mad Men" belongs not merely to Weiner but to its speculating, close-reading fans, who deserve the frustration and delight of seeing their reading validated or rebuked. Show runners: If you love your shows, let them go.