From Apple to Pfizer, these companies are using offshore accounts to game the system. It doesn't have to happen 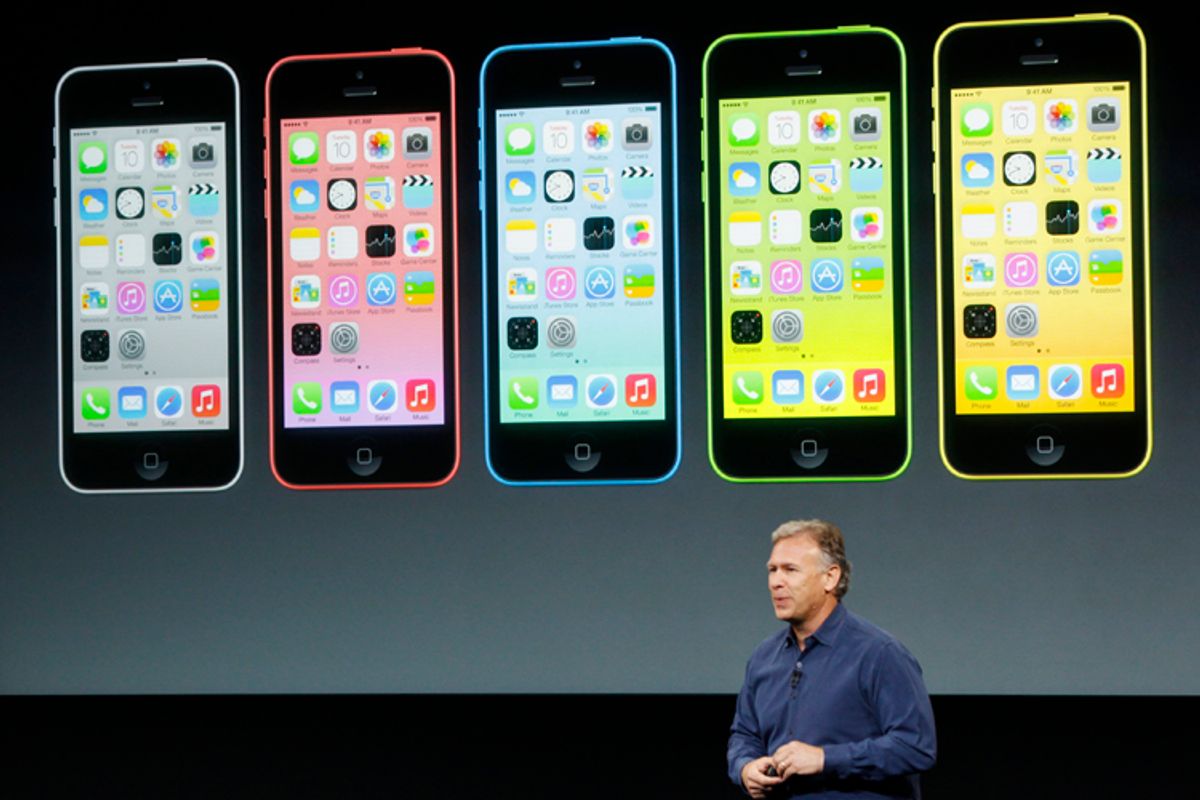 Believe it or not, all four of the statements below are currently being made in Congress and in the hallowed halls of elite opinion:

We’re broke. We have to cut back on all the things government does to make our lives better. Yet let’s let the giant corporations off the hook for hundreds of billions of dollars of taxes they already owe.

Giant multinational corporations have been taking advantage of a tax dodge called “deferral” that lets them hold off from paying their taxes on profits made “outside of the country” until they “bring the money home” – also called “repatriation.” Over the years many companies have been moving jobs, factories and profit centers out of the country solely so they can claim their profits are made outside of the U.S. The amounts involved are astronomical, up to $2 trillion in profits kept out of the country – which means up to $700 billion in taxes owed. (The taxes owed are the 35% top corporate tax rate minus any taxes already paid to other countries.)

A March 2014 report by Thomas L. Hungerford of The Economic Policy Institute (EPI), The Simple Fix to the Problem of How to Tax Multinational Corporations — Ending Deferral, looked at this problem. Among the report’s findings:

There are all kinds of schemes employed by multinational corporations, often involving using foreign subsidiaries that sell to their parent company at high prices. For example, Apple has transferred “intellectual property” (IP) – various patents and copyrights, the “crown jewels” of the company – to a subsidiary in Ireland. When Apple sells products in the U.S. they claim that much of the “cost” of making them is licensing this IP, which means the profit is made by the Irish subsidiary and not the U.S. parent. Pfizer and many, many others use similar schemes to make it look like their U.S. profits are made by foreign subsidiaries. Other companies move jobs, factories, call centers, etc. This puts honest companies that make things here and pay their taxes at a competitive disadvantage.

In response, many of our elite political and opinion leaders are advocating for a “tax holiday.” That would allow companies to bring home profits that they say are “trapped” outside the country, and pay little or none of the taxes they already owe. A popular proposal before Congress lets companies bring money back un- or under-taxed if they invest in an “infrastructure bank.” The companies would be allowed to bring back profits and pay little or no taxes as long as some of the money is used to fund a bank that lends money that is used for infrastructure projects. The companies would, of course, receive a return on their investment. The projects would typically be “public-private partnerships” meaning private companies instead of the public would make money through tolls or other fees. For example, just the other day Bill Clinton advocated for a repatriation holiday to fund an infrastructure bank.

Think about what is going on here. The country is supposedly so desperate for funds that we are cutting back on many, many extremely important things. We are cutting essentials such as education, Food Stamps, unemployment benefits, scientific and health research, safety inspections, disease prevention and control. We're not maintaining and modernizing infrastructure. One reason that we are so strapped for funds is these companies are allowed to defer paying their taxes! Now, understanding they have us over a barrel they are offering to let us get our hands on some of the tax money they owe us if we will let them off from paying it all.For some reason, just telling them to pay their taxes is off the table.

Companies have good reason to believe they should hold out on repatriating profits in hopes they will be granted a “tax holiday” on what they owe. In 2004, Congress actually did grant such a holiday, with the companies promising to use the money to “create jobs.” In 2011 Pat Garofalo at Think Progress summarized what really happened in FLASHBACK: Corporations Used 2004 Tax Holiday To Repatriate Billions, Then Laid Off Thousands Of Workers,

Overall, corporations used 92 percent of the money they brought back under that tax holiday to enrich their executives and buy back their own shares, not to invest in job creation.

Similarly, the Center on Budget and Policy Priorities (CBPP) reported on the tax holiday that “its primary effect was to provide a huge windfall to the shareholders of a small number of very large corporations.”

But no matter that the last tax holiday didn’t work out so well for us, the giant multinationals have a solid track record in getting what they want from Congress. This terrible deferral loophole has given companies an incentive to move jobs, factories, call centers and profit centers out of the country. It has caused as much as $2 trillion to be kept from being invested domestically or returned to their shareholders. And up to $700 billion in taxes have been kept from our government as we’re told that “we’re broke” and must cut so many of the important thingsthat  government does to make our lives better.

Here – in no particular order – are just a few of the companies using various schemes to make it look as though their profits are made outside of the country.

Pharmaceutical manufacturer Pfizer “strips income” out of the United States so they can report it as foreign earnings. Pfizer actually reports a loss on sales in the U.S. while reporting huge profits outside the U.S. – even though they sell more and charge much higher prices here. Explained another way, Martin A. Sullivan of Tax Analysts writes that between 2008-2012, “124 percent of its before-tax profits were foreign, [but] only 57 percent of its sales have been outside the United States.” According to a New York Times report, the result is that, “In its most recent annual report, Pfizer reported $69 billion in foreign profits indefinitely reinvested overseas, and each year’s profits generate more cash.”

Pfizer recently was in the news because of its attempt to purchase the rival British pharmaceutical company AstraZeneca. (Pfizer finally dropped the effort.) Pfizer’s “make or buy” decision was based on avoiding taxes. The idea was that Pfizer could become a British company and avoid paying U.S. taxes anymore and possibly avoid ever paying the deferred taxes it owes.

Pfizer is hardly alone. TheTimes report says, “for most American multinationals, a lot of income from foreign sources is really American income in disguise. Most large multinationals use aggressive transfer pricing and other techniques to strip income out of the United States.”

General Electric is often cited as a company that not only doesn’t pay U.S. taxes, it pays a negative tax rate. General Electric is not all bad. For example, they invest heavily in wind energy and are bringing manufacturing back to the U.S. But our tax laws encourage them to do bad things.

The Times reported in 2011 that GE not only didn’t pay any taxes for many years, the company “claimed a tax benefit of $3.2 billion.” It reported that GE “mixes fierce lobbying for tax breaks and innovative accounting that enables it to concentrate its profits offshore.”

At the end of 2012 GE disclosed it was holding $108 billion outside of the US to avoid paying the taxes it owed on those profits. GE is currently suing the US government for an additional $658 million in federal tax refunds.

Verizon was one of 26 corporations that paid no taxes in the five years between 2008 and 2012. According to a February study by Citizens for Tax Justice (CTJ), The Sorry State of Corporate Taxes, Verizon paid a tax rate of -1.8 percent. Use of this tax deferral for offshoring profits was only a part of Verizon’s overall tax-dodging strategy. According to a fact sheet from Americans for Tax Fairness, “Verizon had $1.9 billion in accumulated offshore profits in 2012, on which it did not pay U.S. taxes.”

From the ATF fact sheet:

Verizon has spent more than $197 million lobbying Congress since 1998. It spent $15.2 million in 2012, with lobbying on tax bills its second-highest priority.

The deferral loophole is only one part of Verizon’s tax-avoidance strategy. Citizens for Tax Justice and Good Jobs First issued a 2011 report, “Unpaid Bills: How Verizon Shortchanges Government Through Tax Dodging and Subsidies,” at a time when Verizon was trying to force its workers to take pay and benefit cuts. According to the report the company aggressively manipulated state tax rules, demanded subsidies, and used other methods to end up with a negative federal income tax rate, and receiving state and local tax subsidies in at least 13 states. From the report:

"At the federal level, Verizon should have paid about $11.4 billion at the statutory rate of 35 percent during the three-year period. Instead, it got $951 million in rebates, putting its federal tax subsidies at $12.3 billion. Its effective federal tax rate was -2.9 percent."

Apple was famously hauled before a Senate committee -- the U.S. Senate Permanent Subcommittee on Investigations – two years ago, and was asked why it transferred its “crown jewels” to an Irish subsidiary. The answer was so it would defer paying (hopefully forever) the taxes it owes the United States. Apple is holding more than $100 billion in foreign tax havens.

"An analysis of Apple Inc.’s financial reports makes clear that Apple has paid almost no income taxes to any country on its $102 billion in offshore cash holdings. That means that this cash hoard reflects profits that were shifted, on paper, out of countries where the profits were actually earned into foreign tax havens."

At a time of worry over budget deficits, Apple was using various schemes to avoid paying as much as $35.3 billion in taxes. From the report:

Another company hauled before the Senate committee to explain why it isn’t paying taxes was Caterpillar. In March, Caterpillar appeared before the same Permanent Subcommittee on Investigation as Apple’s President Tim Cook had appeared.

In 1999 Caterpillar transferred ownership of its international parts-distribution division to a wholly-owned Swiss subsidiary. The company didn’t move any personnel or business activities. Most of Caterpillar’s parts business remained in the U.S. The business transactions concerned parts in warehouses mostly in the U.S., destined for U.S. dealers. Caterpillar transferred ownership of these parts to the Swiss subsidiary but still handled the shipping. But since the ownership was transferred to the Swiss company the profits were considered to be made outside of the U.S.

The result was a savings to Caterpillar of $2.4 billion in U.S. taxation. This is, of course, a loss to taxpayers.

Senate Republicans congratulated Caterpillar on their tax avoidance schemes. From an LA Times report on the hearing:

"Sen. Rand Paul (R-Ky.), who often criticizes the Internal Revenue Service, said Caterpillar should be given an award rather than be put through an "inquisition."

A lot of money is riding on this. According to Americans for Tax Fairness, when corporations don’t pay their fair share of taxes, the rest of us must make up the difference. Here’s how much a handful of these corporations would likely owe in taxes if they brought those profits home:

Of course the simple answer to this problem is to tell companies to just pay their taxes. End the opportunity for companies to defer paying taxes made outside the country and companies will stop engaging in schemes that cost us jobs, factories and tax dollars, and harm honest American-based companies that try to do the right thing, make things here and pay their fair share of taxes.