Chris Christie quietly implodes: Why his big "accomplishments" have fallen to pieces

Distracted by Bridgegate, the national press has missed the unraveling of the entire Chris Christie myth 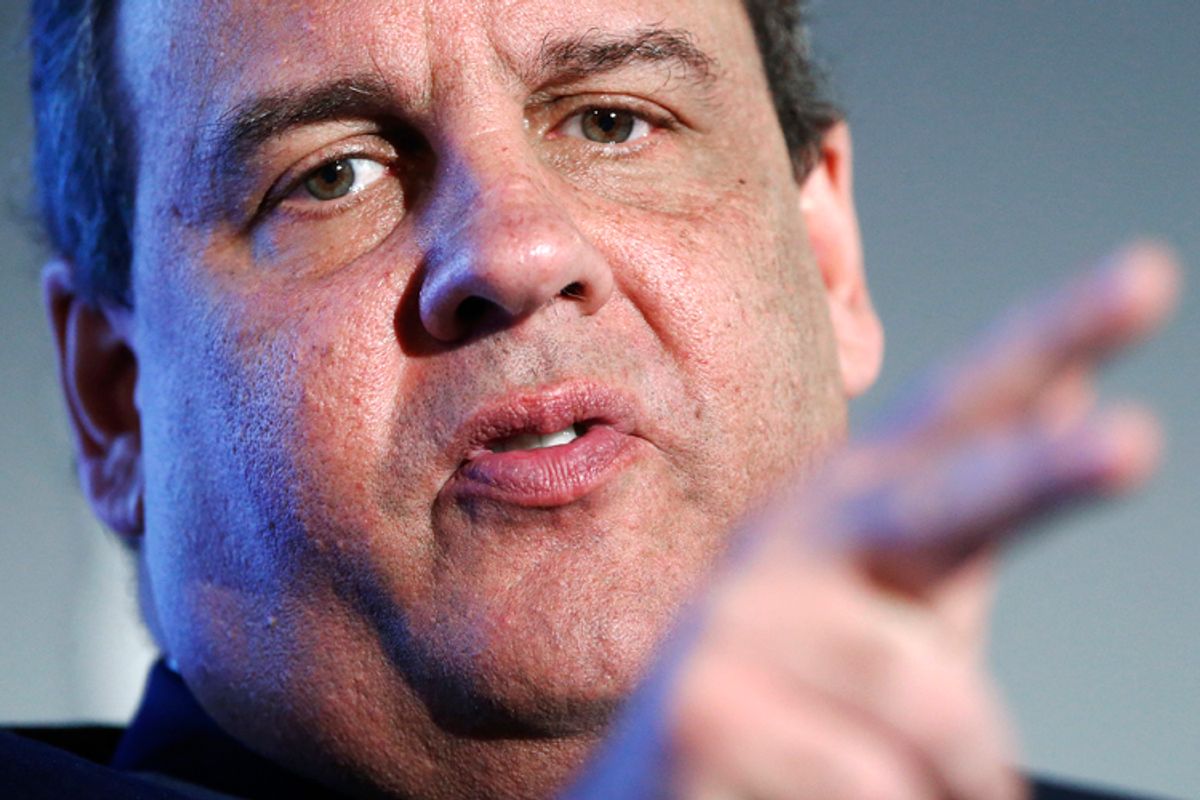 The federal investigations into Bridgegate and the alleged shakedown of Hoboken Mayor Dawn Zimmer haven’t yet been released to the public, but Chris Christie’s own self-exonerating Potemkin inquiry has. So it would be understandable if one concluded the governor had made it through the worst challenge of his political career more or less unscathed. Christie certainly appears to believe this, having recently proclaimed that, if he runs for president in 2016, Bridgegate will by that point be seen as “footnote.” Indeed, he very much sounds like a man who still plans on running for president.

But here’s the funny thing: After a series of post-Bridgegate failures, embarrassments and potential scandals (yes, there are more), Christie’s chances at winning the White House are worse than ever. Not only is he now associated with suspicions of petty corruption but, perhaps more importantly, his greatest accomplishments besides getting elected as a Republican, twice, in New Jersey — improving the state’s finances and reforming its public workers’ pension — are falling to pieces. Surveying the damage, Tom Moran, leader of the Star-Ledger’s editorial board (which endorsed Christie’s reelection in 2013), put it rather simply, saying Christie’s presidential hopes had been “finally snuffed out, once and for all.”

Here’s a quick recap of the many bits of bad news for Christie that Moran believes constitute, in sum, a decisive blow: In part because the New Jersey economy has performed so poorly during Christie’s tenure (it’s ranked 48th in the country in private-sector job creation, tied with the economic powerhouse known as Mississippi), the state’s finances, which Christie used to brag about fixing, are in utter disarray. Its debt, for example, has been downgraded by Wall Street rating agencies six times under his leadership — three times in 2014 alone. Christie now faces a budget gap for this and the coming fiscal year that is nearly $3 billion; and because the state constitution mandates that the government balance the budget by June 30, Christie has now been forced to find the money by reneging on a key part of his landmark pension reform agreement, taking funds that were supposed to go toward public workers’ pensions and using them to fill the budget gaps instead.

All of this on its own could quite reasonably be considered enough to fell a candidate in a Tea Party-inflected GOP presidential primary — especially one who, like Christie, has somewhat strayed from modern far-right orthodoxy on the issues of gun control, same-sex marriage and Sharia Law. What makes matters worse, however, is the fact that Christie is also in the midst of a new series of corruption scandals, this time involving the award of contracts to manage chunks of the state’s pension. As PandoDaily’s David Sirota has uncovered, there is every indication that the Christie administration has ignored state and federal laws by awarding pension management contracts to hedge funds, private equity groups and venture capital firms whose employees have donated to Christie’s reelection campaign and the New Jersey Republican State Committee. According to Sirota’s estimates, the total amount of pension funds thus awarded is enormous: $14 billion.

If Sirota’s right, it’s hard to imagine how Christie could possibly finesse away these charges and avoid being branded, definitively, as corrupt. (And if you worry that I’m overstating the case, you’ll find no better proof of how big a problem this may be for Christie than this: In Bridgegate fashion, he’s launched a self-inquiry into the matter.) By the way, did I mention that Christie’s administration is also in a civil suit with Ben Barlyn, a former prosecutor who claims he was fired because he refused to drop a case against a known Christie ally? And that Christie’s attorney general’s office has opted to outsource its defense to, you guessed it, another powerful law firm with Christie allies at the helm? As was the case in the Bridgegate “investigation,” the state’s taxpayers will foot the bill. That farce cost upwards of $1 million; but if authorities heed the Star-Ledger’s call to make Barlyn’s case more than a civil matter, it could cost even more.

If you take a step back and look at it all together — Bridgegate, Hoboken, the state’s economy, its budget, its pension, the awarding of contracts to political donors and the firing of Barlyn — two things jump out. One, the fact that we even still think of Christie as a real contender in 2016 is remarkable, bizarre and a testament to his political talent. Two, as skilled as he is at self-preservation and promotion, it’s also proof of the real lack of establishment-approved presidential candidates available to Republicans today. How else to explain the enthusiasm among the conservative members of the 1 percent for a presidential run by Jeb Bush, a man who has been out of office since 2007 and has the same last name as the GOP’s new Hoover, his brother, George W.? Only through comparison to the rapidly disintegrating Chris Christie could Bush 2016 look good.