Colson Whitehead: I had zombie anxiety dreams for years

Salon spoke to Whitehead--whose new book is out this month--about monsters, gambling, and imagining the apocalypse 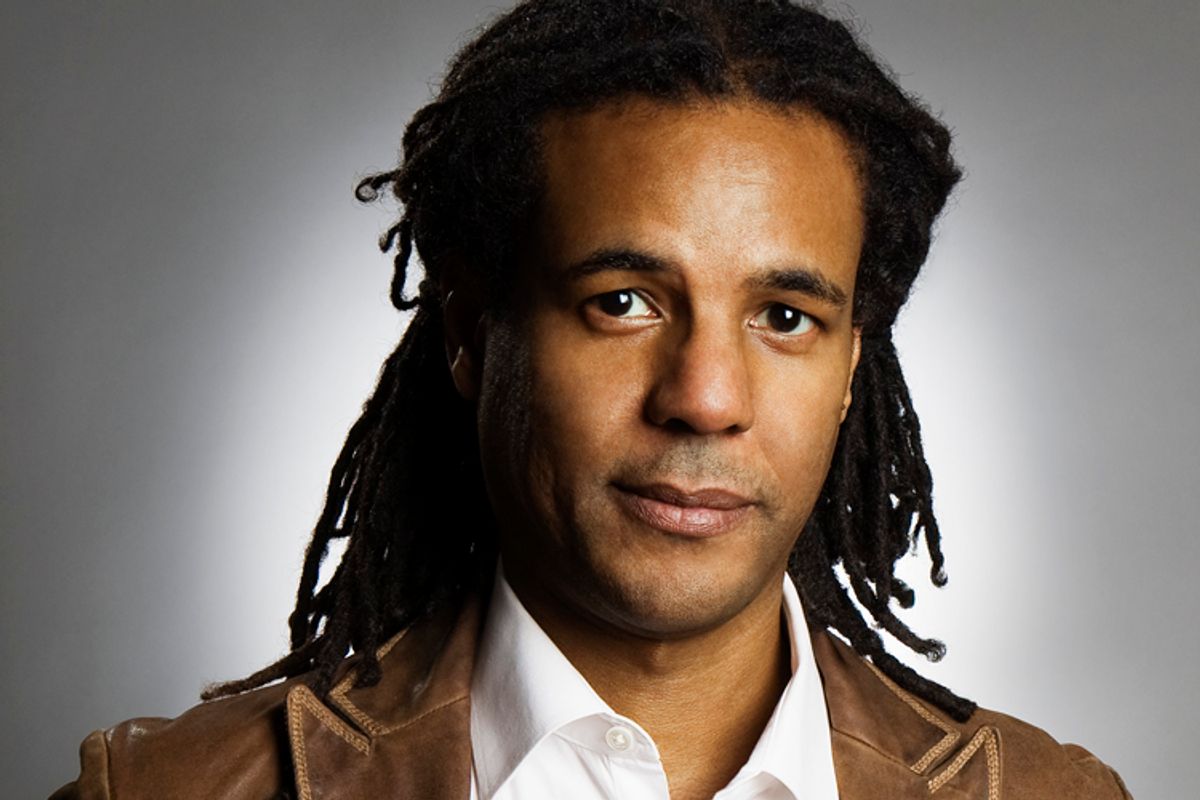 Writing a zombie novel set in a post-apocalyptic Manhattan would not strike most authors as an autobiographical project. For Colson Whitehead, though, evoking hordes of the undead streaming through the streets was just another way of describing life in the big city. What’s striking about his vision of a fallen New York City is how little has changed: It’s still hard to find a cab, gentrification and consumerism are resurgent, and a general feeling of futility suffuses most endeavors.

After his zombie novel, “Zone One,” Whitehead plunged into the world of professional poker to research his new book, “The Noble Hustle: Poker, Beef Jerky and Death” (out this month). It’s a comic dissection of a subculture in the tradition of David Foster Wallace’s best nonfiction, but some personal information also seeps out. At one point, after binging on nocturnal poker shows and crashing on the couch, he observes that sleeping on the sofa reminds him of his recently ended marriage.

Whitehead is a rare creature in the landscape of contemporary fiction: a critical darling with a genuine and voracious appetite for popular culture. He spoke to Salon about zombies, fiction, poker and some of his other interests.

What’s it like to write this style of nonfiction?

For me just to have a voice that is sort of limber and vernacular was very fun. I used to be a critic at the Village Voice in the early ’90s and I sort of wrote like that when I was doing my TV and book and music reviews. So it was nice to go back to that style. Growing up reading Tom Wolfe and Norman Mailer and other titans of new journalism it just seemed natural to apply the techniques of fiction to nonfiction. Playing with voice, structure, point of view. I was playing with form in a way that appeals to me as a fiction writer.

During one flashback in the book you’re taking a road trip with a friend named Darren. It turns out that this is Darren Aronofsky, director of “Black Swan” and “Requiem for a Dream.” So I couldn’t help wondering: Would you two ever collaborate on something? Maybe a movie of “Zone One”?

Probably not. I think we have different ways of doing things. But who knows; life is long and weird. I think writing a screenplay would be interesting. I don’t think dealing with writers, producers and studio executives would be very fun. I’m sort of used to the autonomy of writing novels and not worrying about people giving me notes or going over budgets. But, you know, as someone who grew up watching a lot of movies and TV, film culture is appealing. But it comes with the drawback of actually having to deal with other people.

How about a film version of “Zone One” or any of your other work?

Well, money is always nice. But when it becomes a film it’s not your book anymore, so if you take the money and know that what comes up on the screen will be a very different kind of take on your idea, if you’re fine with that then movies are perfectly acceptable.

I remember some people making a big deal out of a literary novelist doing a zombie novel. How did you feel about that? What do you think of the perceived divide between literary and genre fiction?

Well, you know, it’s a pretty dumb argument in 2014 when you have, say, Philip Roth doing “The Plot Against America,” which is an alternative history. “Infinite Jest” is a science fiction book. It takes place in the future and invented technology is a prime storytelling engine. Cormac McCarthy doing “The Road” – there are so many different examples. My first book, “The Intuitionist,” was a takeoff on detective fiction and detective movies. So the argument is sort of boring and dumb and I think is evidence of snobbery and small-mindedness and people not reading widely enough.

What attracted you to zombies as a subject?

They always had a sort of neurotic fascination for me. I grew up going to the video store on Fridays and renting horror movies and gorging on splatter flicks when I was like 10 and 11. I came across horror and dystopian science-fiction movies pretty early. Thirty years on, after having zombie anxiety dreams for many years, it seemed time to sort of address what I found so fascinating with zombies. Part of it is the idea of the zombie as the everyday becoming monstrous; people you love, your family, friends and neighbors suddenly dropping the mask and no longer pretending to be human seemed particularly scary. It was fantasy and science fiction and horror that made me want to start writing in the first place, so it seemed like a good time to kind of salute my influences.

It struck me that there wasn’t such a clear line in “Zone One” between our current world and your vision of a post-apocalyptic one.

Well, yes. I think everyday existence is somewhat zombified in terms of how we go about our beloved routines and the way we numb ourselves.

Who are some of your big influences as a writer?

When I was in junior high and high school it was Stephen King and H.P. Lovecraft. In college, being introduced to the standard modernists – Joyce, Eliot, Virginia Woolf – was very instructive. Depending on what book I’m writing I’m thinking of people whose writing was very eye-opening when I was young. So the voice of "The Colossus of New York" and certain sections of "John Henry Days" I think was inspired by John Dos Passos and the camera-eye sections of his U.S.A. trilogy. In terms of the structure of "John Henry Days," it’s not as good as “Moby Dick” and “Gravity’s Rainbow,” but that kind of big, capacious novel provided a structure. Like any writer, I read a lot of different things. When I’m writing something, I don’t read a lot of novels that are in the same genre if I can help it.

There was a line in your new book about the Internet decreasing your attention span.

Certainly without the Internet, streaming technology and television, I would probably read more.

Saul Bellow once made fun of interviewers asking writers about little details of the process. What kinds of pens they use, particular habits or routines that help them write. But I kind of want to ask anyway.

When I’m outlining, I’m writing in notebooks. When I’m writing a book, it’s half notebook, half computer. If I’m doing things right I have a whole day to myself, maybe 10 a.m. to 3 p.m. to get writing done. If I have a noon dentist appointment, I don’t really start writing before, and the whole day is shot. If I get three to four days a week going 10 to 3, I’m pretty happy. That sort of means I am accumulating pages and making that mountain of sand grains that is a novel.

There’s the anecdote about Faulkner starting “The Sound and the Fury” with the image of a girl in muddy underwear climbing a tree. Do you start with an image, a phrase, a plot outline, a character?

It’s very different for each one. With “The Intuitionist” and “John Henry Days” I had an intellectual problem I wanted to solve. Like how do you update the industrial-age anxiety myth of John Henry for the information age? That’s a proposition, there’s no characters or any given story. So how do you build a world out of that? "Sag Harbor" was a different situation, a black community in the Hamptons in the ’80s. I wanted to explore, do some anthropology about life back then for these teenagers.

“Noble Hustle” just came to me as an assignment, but in some ways I’ve been training for it for years. I think a lot about cards as a hobby or interest, but never thought I’d write a poker book. It kind of fell in my lap, but my love of cards has been going on for decades.

What do you love about cards?

Games like poker where there’s luck and skill involved – I like being in that middle state between what you know and your strategy and the sort of randomness of fate stepping in and giving you that seven of hearts or that ace of spades. So the interplay between your own skills and then the randomness of fate speaks to how I sort of feel about life. Going through life hoping for a good hand, and if that good hand comes maybe the week or the day won’t be so bad.

The end of “Zone One” is pretty bleak, like there’s not much hope for humanity. Does this reflect your own worldview?

Well, there’s me and that is the attitude of the narrator, and they’re separate things. Definitely “Sag Harbor” captures the more optimistic element of my personality; “Zone One,” a more pessimistic part. But with apocalyptic literature you do need the hope of the refuge, the settlement camp where you’ll finally be safe. If the characters don’t believe that there is a chance to be safe, they just kill themselves. There’s no reason to go on. A post-apocalyptic genre can’t exist without the possibility of hope.