How the Sterlings can actually make it right

The Clippers seem to have a new owner. But if the Sterlings really want redemption, here's what they need to do 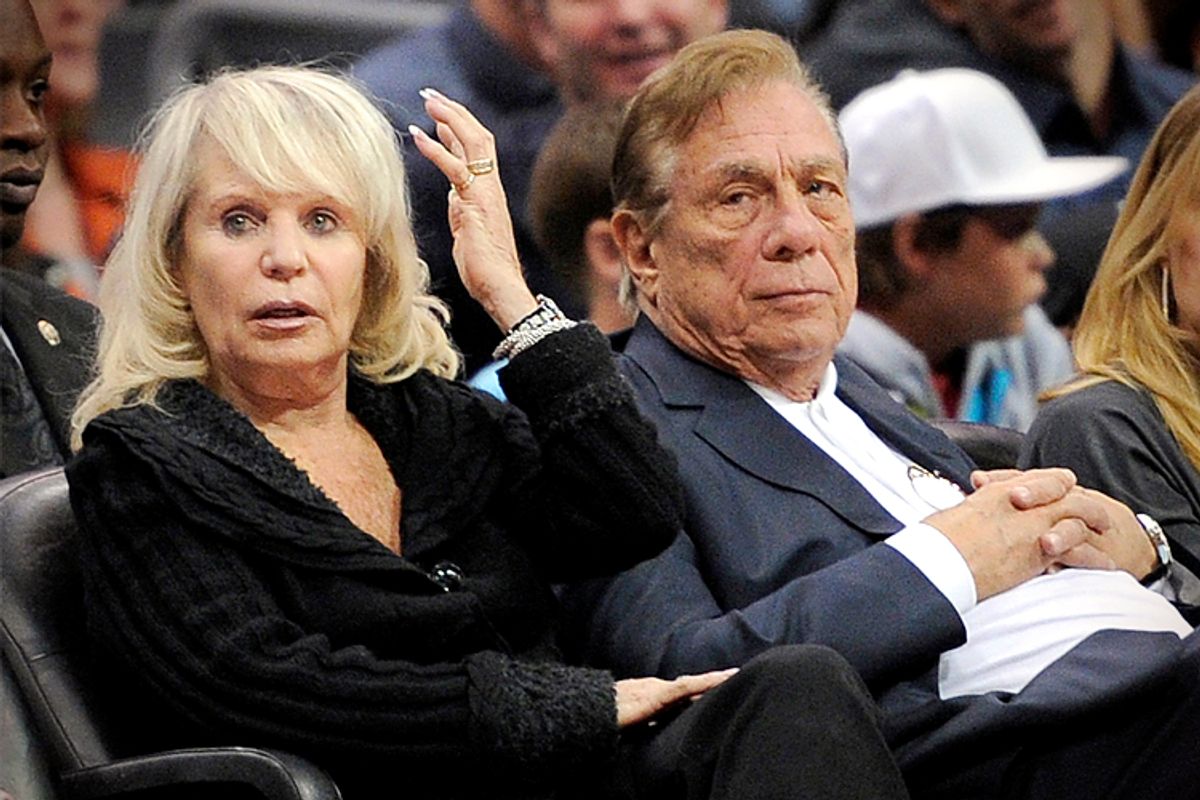 Like a lot of Clippers fans, I’ve seen you in the stands for years, blond hair and hooded eyes, eyeing members of the team as they run up and down the court. It’s amazing what you’ve done with the team, from a purely financial point of view. You and Donald Sterling bought the team in 1981 for $12.5 million with no cash down. Since Los Angeles is the second biggest television market in the nation -- and since the NBA lives on TV proceeds -- the Los Angeles Clippers have evolved into an astronomically valuable property. If reports stand, Steve Ballmer is set to acquire the team for $2 billion. That’s an amazing 16,000 percent return on your investment. You go, girl!

Now, you've actually negotiated the team’s sale, which somehow seems fitting. You were a key, behind-the-scenes player in the drama that precipitated your husband's lifetime ban from the NBA. But that isn't the only reason why this letter is addressed to you, and not your other half.

In the public's eyes, your husband's reputation is probably damaged beyond repair. And, far from being a passive observer in your husband's West Coast empire, you've been an adviser, collector and active participant. So, the bad rap is partly yours. But, you can still fix your image problem, and undo some of the harm your family has done over the years.

To that end, I’ll bet you’ve wondered what all the hullabaloo’s been about. It’s not like the NBA, media and fans haven’t known about your and your husband’s antebellum management style for quite a while. In February 2006, Elgin Baylor, the Clippers general manager from 1986 to 2008, filed an age and racial discrimination suit against your husband alleging, among other things, that he repeatedly expressed a desire to field a team of "poor black boys from the South ... playing for a white coach." Your team’s attorneys denied the accusations, but they didn’t deny how poorly Donald treated Baylor. Still, he lost his suit. A similar thing occurred a few months later, in August 2006, when the U.S. Justice Department claimed you, your husband and three of your companies engaged in discrimination by refusing to rent to African-Americans, Koreans and people with kids. Where was the uproar over that federal race-infused case?

What’s done is done. But you’re at that age, Shelly, when most businesswomen are contemplating their legacy. How will you be remembered? It seems as if you’re finally thinking about what the Beverly Hills Courier will say about you when you’re gone. Indeed, you got in front of the situation quickly by dropping your position of keeping part of the Clippers to collecting a fine offer from former Microsoft CEO Steve Ballmer. Now, all you have to do is secure most of the votes from the other NBA team owners, and a lot of goodwill from the Clippers' long-suffering fans.

So here's what I think you should do to polish what’s left of the Sterling brand.

1. Clean up your act. It’s true you own some very nice properties, like the "ultra-luxurious" Malibu Beach Villas complex on Pacific Coast Highway, just steps away from Billionaires Beach. You own other houses on this pricey shoreline, as well as a luxurious Beverly Hills home.

But it’s the lower-income places owned by the Donald T. Sterling Trust that are a problem. Your practice of impersonating a health official and going door-to-door to personally collect rent from your downtown tenants has got to go. And don’t evict any more blind, partially paralyzed black senior citizens who pay their rent on time. Yes, Kandyce Jones complained about flooding in her apartment. But she looked heroic standing her ground even when her belongings were floating around her ankles. Not true of you and your husband, who refused to repair the 67-year-old woman’s apartment, which hurt her so much, according to a lawsuit filed by her daughter, that she had a stroke and eventually died in your squalid unit.

That should never ever happen again.

2. Lean on your peers. After you’ve cleaned your own house, urge others to do the same, like your Beverly Hills neighbor, Ron Perlstein. He’d been renting out an old condemned building in South Los Angeles to poor and disabled blacks and Latinos. This building had only three showers for 42 residents; bedbugs and vermin outnumbered working windows; and mold and water damage plagued tenants, who paid as much as $600 a month. It turned out the place had never been approved for human dwelling. Last month, things got so bad that the fire department ordered tenants to leave quickly. By law, Perlstein had to provide funds so that tenants could relocate, and he finally sent $141,000 in checks for nearly a dozen tenants.

You could influence some of your new acquaintances, too. Stephen Schwarzman may be known in Manhattan as the head of private equity giant Blackstone. But in California, he and his unit Invitation Homes are being called slumlords. Over the past year, his firm has snapped up legions of foreclosed homes in California to fix and rent. But according to several accounts, Blackstone does as little as possible to maintain these properties. Many renters are Latinos and blacks and one couple, Roland and Edit Novshadyan of Sun Valley, California, recently sued the Blackstone unit for its appalling practices.

When the Novshadyans moved into an Invitation home, they said they found trash strewn about the house, and urine on the bathroom floors. Cockroaches infested the house, the air conditioner failed, tap water turned brown and a bathroom flooded. The couple took their two young children and left. But Blackstone locked them out of the house, which prevented them from retrieving their possessions. They had to buy new furniture and bedding and now live elsewhere. But the Novshadyans continue to hear from Schwarzman and company. Lawyers for Invitation Homes said that the lease required the couple “to pay rent while they did not occupy the property.”  It’s landlords like this who give the 1 percent a bad name. By making a few calls, you could shame these guys into changing their practices or stepping down. It’s worked before.

3. Adopt a cause. Forget all these full-page advertisements you placed in the Los Angeles Times trumpeting your philanthropic endeavors. Impressive as the numbers were -- $10 million, $17 million and even $20 million -- it turns out your foundation never quite gave that much in charitable donations.

So get serious and adopt a good cause. Take the once-promising young man Brandon Spencer. He’d been shot in the stomach by a gang member years ago but had distanced himself from that life. Then, at a Halloween party at University of Southern California in 2012, he spied his shooter. Because Spencer’s prefrontal cortex was still developing, what he did next was stupid. He went home to retrieve his gun and returned to shoot the target and three innocent bystanders. But he did not kill anyone.

The 21-year-old had no criminal record. He was working as a licensed security guard and had enrolled at UCLA to begin studying to be an emergency medical technician, said his attorney, John Blanchard. But Los Angeles County Superior Court Judge Edmund W. Clarke Jr. refused to let jurors hear about the young man’s plans. At the urging of a deputy district attorney and USC law school grad, Antonella Nistorescu, the white judge sentenced him to 40 years. Spencer's father contends his son was unfairly prosecuted to satisfy USC, its donors and friends like, for example, Schwarzman. Many people in Los Angeles have decried Spencer’s sentence as “a clear injustice,” but no one has picked up his cause.

You, on the other hand, know something about young men and guns. Your own son shot his friend several times and actually killed him in 1999. Yet, he didn’t face any charges and certainly didn’t get 40 years in prison. I’m truly sorry he died more than a decade later of an apparent drug overdose on New Year's Eve: A mother’s loss is like no other. Imagine how Mrs. Spencer must have felt when she saw her sobbing son begging for leniency?

You could hire a member in your busy legal division to appeal Spencer’s case pro bono and win. That would redeem two family tragedies, reverse at least one gross racial injustice, and give your entire theatrical performance an uplifting ending. After such a surprising turnaround, the NBA and its team owners just might let your brilliant deal go through.