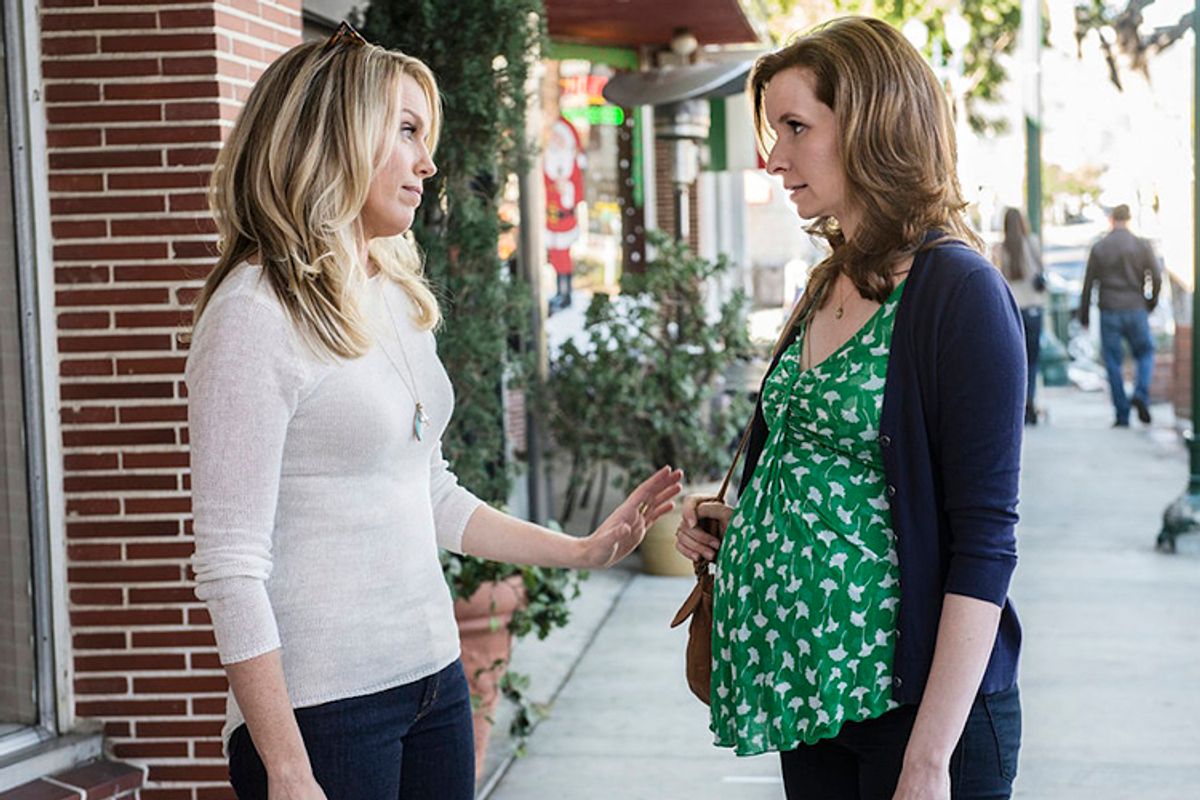 “Playing House” is a new show on the USA network. USA as in, these colors don't run/never forget/”Monk.” I was late to this show because I literally thought the only person that watched USA was my mom. When I saw the commercial for “Playing House,” starring amazing comics like Lennon Parham, Jessica St. Clair, Zach Woods and Keegan-Michael Key, and killer guest stars like Andy Daly, Neil Casey and Jane Kaczmarek, I thought, “Well that's a shame. Hope they all get back on their feet.”

Turns out, USA has some of the longest-running shows out there! It’s a station that people love! Sure, it has some crappy shows, but as the USA motto goes, “Freedom ain’t free.”

Most important, USA is one of the few networks that has taken a chance on a comedy with two female leads -- and made something totally unique. Two female leads who aren’t looking for men to define them, or who have found men who define them and are holding said men accountable for their “hilarious” man shenanigans.

In America, we love our white-guy leads with their white-guy stubble, and their white guy “get laid or die trying” mentality. These adorable screw-ups are looking for love in all the wrong places and sleeping with hundreds of women who are out of their league along the way. Have a crush on your neighbor? Well, just bother her for enough seasons and eventually she will have to sleep with you. Hell, according to ’80s movies, even mannequins will have sex with you.

The supporting cast has Keegan-Michael Key (of Comedy Central’s "Key and Peele") as the local cop and ex-high school sweetheart of St. Clair. He is charming, hilarious and a pro at playing “chronically annoyed.” Finally, Zach Woods plays Parham’s brother, who is super-weird and also runs the local poetry club. Anyone who has seen Woods improvise live knows he’s one of the best out there.

There is still plenty of dating and talking about men in “Playing House.” Feminists don’t dream of a show with an all-female cast living on their own planet and planning how to travel down to earth and enslave the male race. (I want that show now.) The point is, you can have shows with those clichés. And it can still be completely original and great.

On “Playing House,” the women have their own personalities and don’t answer to anyone but themselves. Their own personalities?! Do they show their boobs?! NO?! Side boob?! NO. But they don’t talk a lot, right?! THEY DO?! Misandry! In the second episode of “Playing House,” we see Parnham and St. Clair’s characters get stuck having a ladies brunch with St. Clair’s ex-boyfriend’s new girlfriend. What starts off as a potential mean-girls situation turns into a sweet bonding moment between the three of them, and not in a schmaltzy way either.

These women aren’t walking around like dead-eyed shopping monsters trying to find a man. They aren’t clueless and knocking things over. When a guy is having a good time, none of the ladies parachute in through a skylight screaming about responsibility and ruining everyone’s fun. They are the highlight of the show. Their friendship, their relationship, their insecurities, their mean-girl past — all of it is hilarious.

"Playing House" is different from “Broad City” and “Inside Amy Schumer” — shows that afford their leads a lot of creative freedom and the flexibility to play around with structure — in that it is the exact format that ruins a lot of our favorite scrappy stand-up and improv comedians: It’s basically a sitcom. It could have been the show that makes you say: “I know those comics from the Upright Citizens Brigade Theater! Why is there a laugh track? Why does that guy have panties on his head? Why did the neighbor just come riding in on roller skates? This sucks” — but instead it’s surprisingly weird and sharp-edged. Parham and St. Clair, along with many of the writers and guests, are improvisers, and much of the writing process involves improv, with minimal pause-for-applause lines.  After so many hacky network shows recycling the same tired man-centric garbage (R.I.P. “Dads”), “Playing House” is a hidden delight.