Gun nuts aim at each other! Inside NRA's fight with open-carry lunatics

Open-carry enthusiasts are being called "strange," "scary" and "downright weird." And that's just by the NRA! 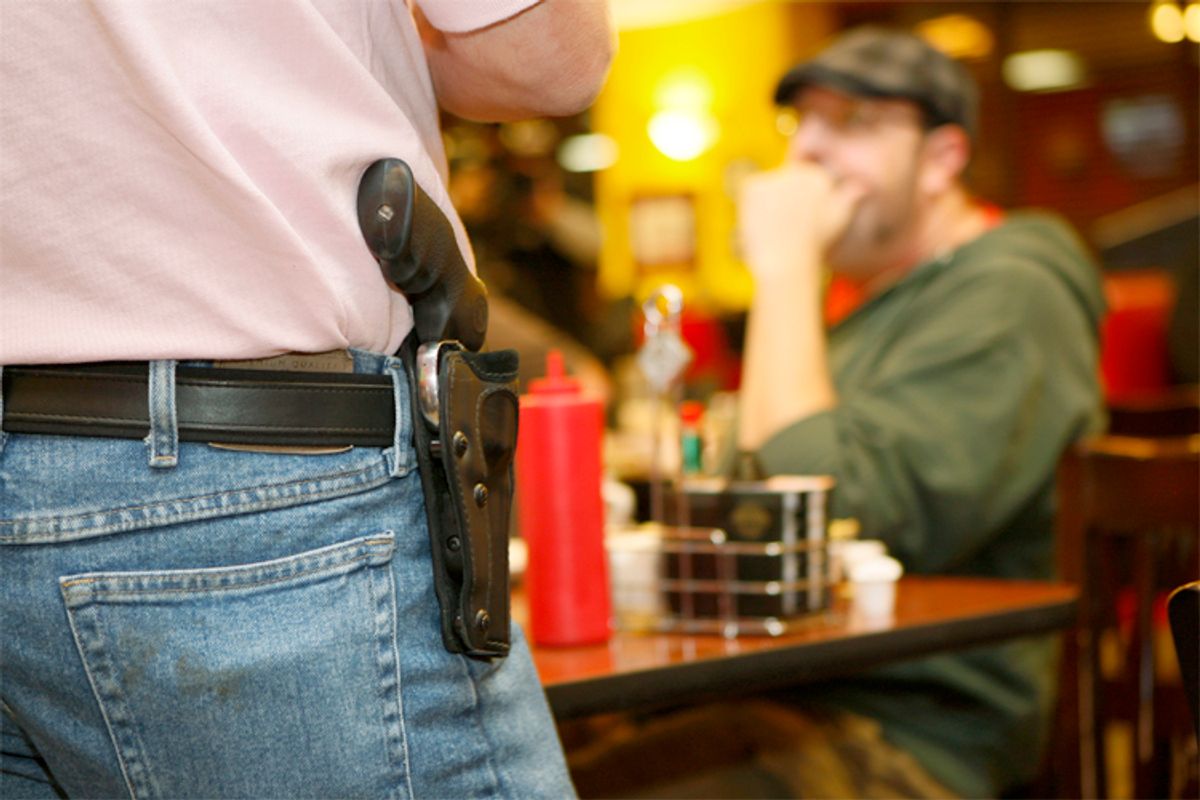 There is no better manifestation of American gun culture gone off the deep end than when greater-than-zero people believe there's nothing strange about openly wearing a semiautomatic rifle on a sling into a fast-food burrito line. It is strange. It's downright weird and scary. Only the people who aren't scared by such a scene are the weird ones.

Even the National Rifle Association admits this. Those very descriptors -- "strange," "scary," "downright weird" -- are their very words, from a statement released last Friday.

Yet while unlicensed open carry of long guns is also typically legal in most places, it is a rare sight to see someone sidle up next to you in line for lunch with a 7.62 rifle slung across his chest, much less a whole gaggle of folks descending on the same public venue with similar arms.

Let's not mince words, not only is it rare, it's downright weird and certainly not a practical way to go normally about your business while being prepared to defend yourself. To those who are not acquainted with the dubious practice of using public displays of firearms as a means to draw attention to oneself or one's cause, it can be downright scary.  It makes folks who might normally be perfectly open-minded about firearms feel uncomfortable and question the motives of pro-gun advocates.

What's amusing, and revealing, about this lengthy, rambling statement is how it couches the sort of mockery you see above with lip service and sweet cooings to the pro-gun community and activists aligned with Open Carry Texas. The statement says "we love AR-15s and AKs as much as anybody" and praises Texas as "second to none for its robust gun culture," an "independent-minded and liberty-loving place." To wander into Chipotle with assault rifles is "out of character for the big-hearted residents of Texas. Using guns merely to draw attention to yourself in public not only defies common sense, it shows a lack of consideration and manners. That's not the Texas way. And that's certainly not the NRA way." In sum, the National Rifle Association *LOVES* Texas, and guns, and doesn't support any bans on the open carry of anything, or restrictions on any guns sold anywhere, but just wants these GLORIOUS HEROIC Texas activists to stop being counterproductive IDIOTS.

But it appears that the NRA still didn't manage to include quite enough compliments to the freedom-loving patriots who comprise Open Carry Texas. OCT released a statement of its own yesterday condemning the NRA as puppets of the liberal media and the nefarious Michael Bloomberg. Even worse was the sin of restating what OCT and fellow activist groups had already said? How dare the liberal gun-grabbers at the NRA second their recommendation!

It is unfortunate that an organization that claims to be dedicated to the preservation of gun rights would attack another organization fighting so hard for those rights in Texas. The fact is that the NRA hasn't been able to get open carry passed in Texas since the right was first taken away from us when Jim Crow laws were passed in the 1860s, making us one of only 5 states where it is still illegal. The NRA has refused to learn for themselves how Open Carry Texas (OCT) conducts itself other than what the liberal media and Bloomberg funded gun control extremists have falsely portrayed. The real ignorance in their statement is that it was completely unnecessary. OCT - along with Come And Take It Texas, Texas Carry and Gun Rights Across America - has already changed its methods and the whole world is aware of that. The more the NRA continues to divide its members by attacking some aspects of gun rights instead of supporting all gun rights, the more support it will lose. Already, OCT members are posting pictures of themselves cutting up their life membership cards. If they do not retract their disgusting and disrespectful comments, OCT will have no choice but to withdraw its full support of the NRA and establish relationships with other gun rights organizations that fight for ALL gun rights, instead of just paying them lip service the way the NRA appears to be doing. The NRA should have instead released a statement to the effect that it applauds our groups for coming together and finding new methods to promote safe and responsible open carry.

Indeed, OCT had already told its ranks to quit with the whole casually-wearing-assault-rifles-in-Chipotle thing. (Not because there's anything wrong with that, per se, but because it gives ammunition to the liberal enemy or whatever.) Instead of welcoming the NRA's support on this end, however, it felt that the statement was unfairly punching down. And so this devolves into a gun-night turf war. The OCT's statement on Facebook is accompanied by an image of a cut-up NRA membership card.

They can fight over members all they want. (And you, reader, are free to enjoy watching that spectacle.) But both groups face the same basic problem: they're trying to manage a culture, again, in which a not-insignificant number of people think it's OK, or even politically useful, to openly carry "long arms," as a group, into the local burrito chain restaurant. How are you supposed to maintain order and plot tactics in an organized fashion among these sort of people? Because they seem like the sort of people who don't want to follow orders from anyone.