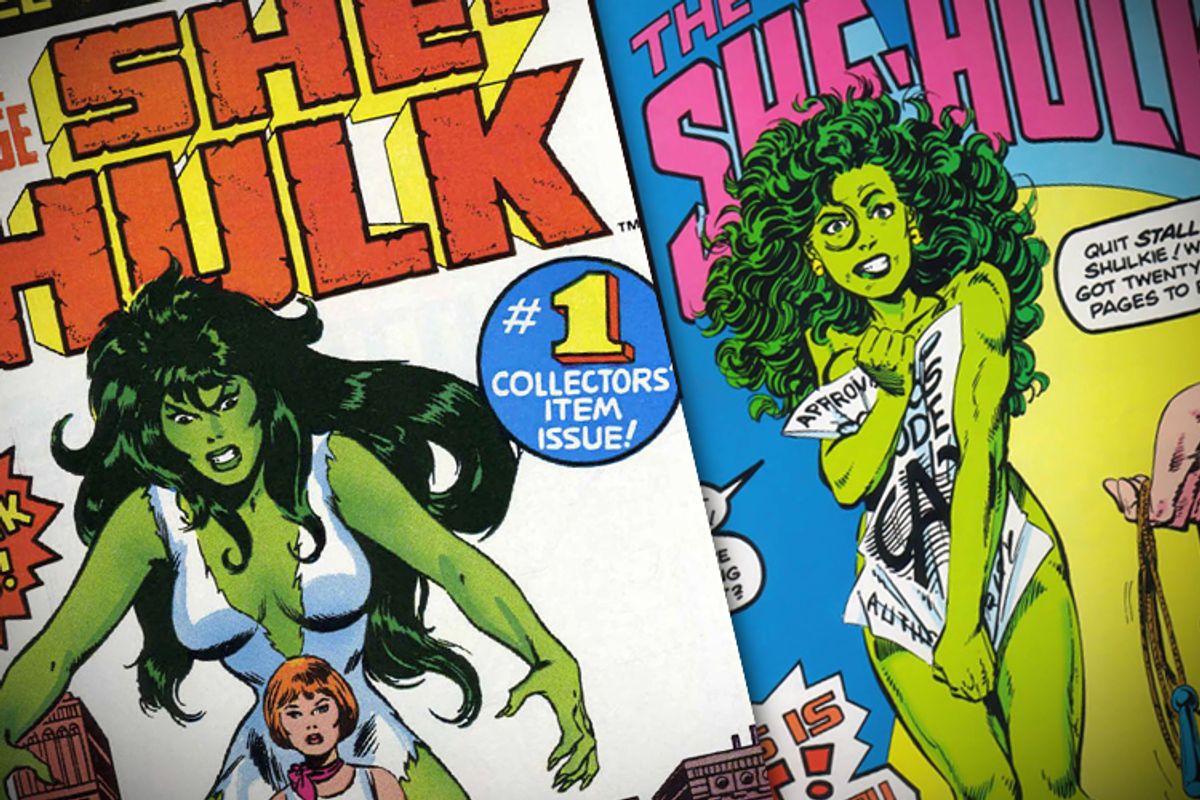 For the most part, the major superhero properties at Marvel and DC Comics were created for guys by guys who were, to put it kindly, not especially enlightened when it came to gender issues. Early Superman comics featured images of naughty girls getting spanked (“I am doing it— and do I love it!” the spanker declares). Stan Lee and Jack Kirby created the Invisible Girl (because girls just kind of fade into the background, you know?). The first issue of X-Men shows Marvel Girl/Jean Grey being ogled and harassed by her X-peers while Professor X looks on benignly. Examples continue right on up to our own day, in which Starfire is an amnesiac sex-doll and Catwoman appears to be menaced by her own rear end.

“Man of Steel” screenwriter David S. Goyer recently managed to both explain and embody this tradition of superhero sexism in a Scriptnotes podcast interview. In a conversation about the character She-Hulk, the podcast host called her “Slut-Hulk,” and then Goyer launched into his own interpretation:

I have a theory about She-Hulk. Which was created by a man, right? And at the time in particular I think 95 percent of comic book readers were men and certainly almost all of the comic book writers were men. So the Hulk was this classic male power fantasy. It’s like, most of the people reading comic books were these people like me who were just these little kids getting the shit kicked out of them every day… And so then they created She-Hulk, right? Who was still smart… I think She-Hulk is the chick that you could fuck if you were Hulk, you know what I’m saying? … She-Hulk was the extension of the male power fantasy. So it’s like if I’m going to be this geek who becomes the Hulk then let’s create a giant green porn star that only the Hulk could fuck.

Goyer isn’t wrong, exactly; most estimates of superhero comics readership I’ve seen put the audience at around 90 percent male, and She-Hulk herself was certainly created by men (Stan Lee and John Buscema.) And the character is, and has always been, very sexualized.

Stan Lee has pointed out that She-Hulk is Hulk’s cousin, not his lover. Alyssa Rosenberg argues for her part that “She-Hulk is not a male fantasy of how sexual liberation works, where women focus more on making men happy than on their own pleasure. Rather, she is an adventuress with a clear sense of her own gratification and joy.” There’s no doubt that She-Hulk can be used in a feminist way — but even in the Dan Slott version of She-Hulk that Rosenberg praises, there are issues. Osvaldo Oyola points to a sequence where Slott has a court literally slut-shame She-Hulk by reading out an extended list of all the people she’s ever slept with. As Oyola says, “It is this kind of stuff that undermines Slott’s work to establish her character as a formidable lawyer — not because we don’t see her solving cases and doing research, all the things trial lawyers do, but because her sexualization is always at the forefront no matter what else she is doing.”

I haven’t read the Slott “She-Hulk,” but I’ve read enough superhero comics that I don’t find Oyola’s conclusion especially surprising.  Again (and as Goyer says), superhero comics have historically been, and are still generally today, created overwhelmingly by men with an eye to a male audience. Even She-Hulk’s name casts her as secondary; an appendage or afterthought to the “real” hero. That doesn’t mean that Rosenberg, or other female fans of She-Hulk, are wrong to like her or see value in the character. But it does mean that it is always likely that there will be someone like Goyer who is eager to giggle over and revel in superhero sexism.

Feminist criticisms of the (seemingly endless) superhero movie fad have often focused on the fact that there aren’t enough female superhero films — on asking why Thor and Iron Man and other relatively minor properties get to headline, but Wonder Woman and Storm aren’t yet on the marquee.  I’m broadly sympathetic to that argument; if we’re going to have superhero films forever until we all superpuke, then there should be women up there in spandex performing superfeats along with the guys.

But I’d also like to see some discussion of the fact that making so much of our big-screen entertainment dependent on decades-old properties created in the equivalent of a male locker room is maybe not ideal for anyone, of whatever gender.  As Joy DeLyria has suggested, the practice of rebooting and readapting earlier material tends to mean that you recapitulate the politics of an earlier time — so that the "Star Trek" franchise, for example, has returned to the days before DS9 or Voyager, when the major heroes were white and guys.  Again, it’s possible to push against this, as with the casting of Michael B. Jordan as Johnny Storm. But the original stories have their own logic too, and when you don’t think about it too hard, you end up with Jor-El getting tons of screen time in “Man of Steel” while Lara gets hardly any, just because Jor-El has always been a fuller character than Lara in all those sexist comics (and films) over the years.

Superhero films are significantly rooted in nostalgia; they’re about spending time again with those same heroes you spent time with as a kid (whether through reading about them or just seeing their pictures on a lunchbox). With Marvel and DC, that nostalgia is often, rather helplessly, bound up with a nostalgia for sexism: for comics in which guys were generally the most important characters, and women were insistently sexualized and generally secondary. There are exceptions — the X-Men franchise has often had interesting and varied women heroes, the new Ms. Marvel comic is great.  But in light of the long history of gender issues in comics, screenwriters like Goyer should be a lot more careful about what they say.