"This would be rape if you weren't so stupid": "Louie's" most disturbing scene yet

Last night's episode makes it just a little harder to love Louis C.K. -- and maybe he wants it that way 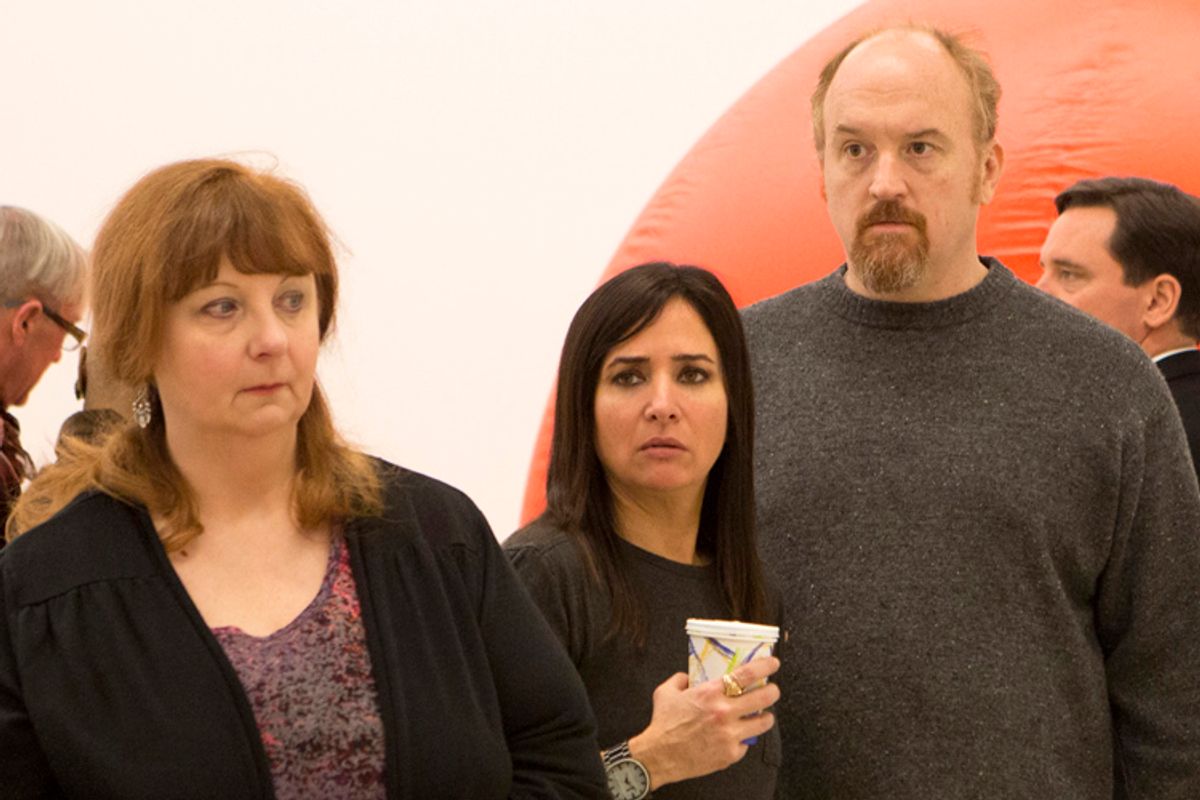 During "Pamela 1," the last of two episodes of FX's "Louie" that aired back-to-back last night, Louie C.K. corners a woman in his apartment and repeatedly attempts to physically overpower and force himself upon her. The fact that the woman is his longtime friend and occasional romantic interest Pamela (Adlon) is, for some fans, enough to disassociate the incident from an attempted rape. For others who watched along in horror, it most certainly is not:

Even Louis C.K., as the show's primary writer, acknowledges that a line, however blurry, has been crossed. As she successfully wrestles away from his attempts to drag her to his bedroom, yank her shirt up and kiss her, Pamela remarks, "This would be rape if you weren't so stupid. My god, you can't even rape well." I almost wrote "bumbling attempts" in the previous sentence, but that would have been apologetic bullshit. The simple truth is that Louie is a rather large man, and Pamela is a very small woman, and, though she managed to squirm out of his grasp, it could have easily gone the other way. In the end, she consents to a kiss -- although, I don't know of too many women who would consider cowering in a doorframe begrudgingly allowing physical contact so that they can safely leave as "consent."

The scene, while funny in fragments, is disturbing. What is also disturbing is that, minutes earlier, we are asked to believe that Louie is heartbroken, struggling to get over a mostly chaste, exceedingly sweet, month-long (six episode) affair with a woman who just returned to Hungary. Indeed, we see him walking alone in the cold, pining for her, at the beginning of this episode. And, so, unless the character is an emotional infant whose affections realign in an instant, Louie's romantic aggression toward Pamela cannot possibly be construed as anything remotely genuine -- not that that would absolve him anyway.

In between Louie's leapfrogging from one "love" to the next, we are treated to a lengthier-than-usual stand-up routine in which the comedian openly acknowledges man's history of inhumanity to woman. He briefly covers women's suffrage, male-centric theology, the cruelty of the term "wifebeater," and arrives at the conclusion that, since women are the original nurturers, society must only be male dominated because, at some point, men figured out that they could hit women and, thereby, subdue them.

This is hardly the first time this season that Louis C.K. has directly referenced the issue of violence against women. In an early episode, he was, once again, the perpetrator of such violence, albeit by accident. (In hindsight, "Model" feels like a prologue to "Pamela 1," the latter now upsetting our perception of the former.) Louis C.K.'s willingness to acknowledge injustice and inequality, however discomfiting in its expression, has earned him a great deal of credit and esteem as a creator. His eagerness to implicate himself in it -- Louie the character, Louis the auteur -- has created the complicated portrait of a man who requires a public forum in which to struggle with his darkest impulses.