Wingnuts' war on the troops: The ugly lesson of Bowe Bergdahl and Sarah Palin 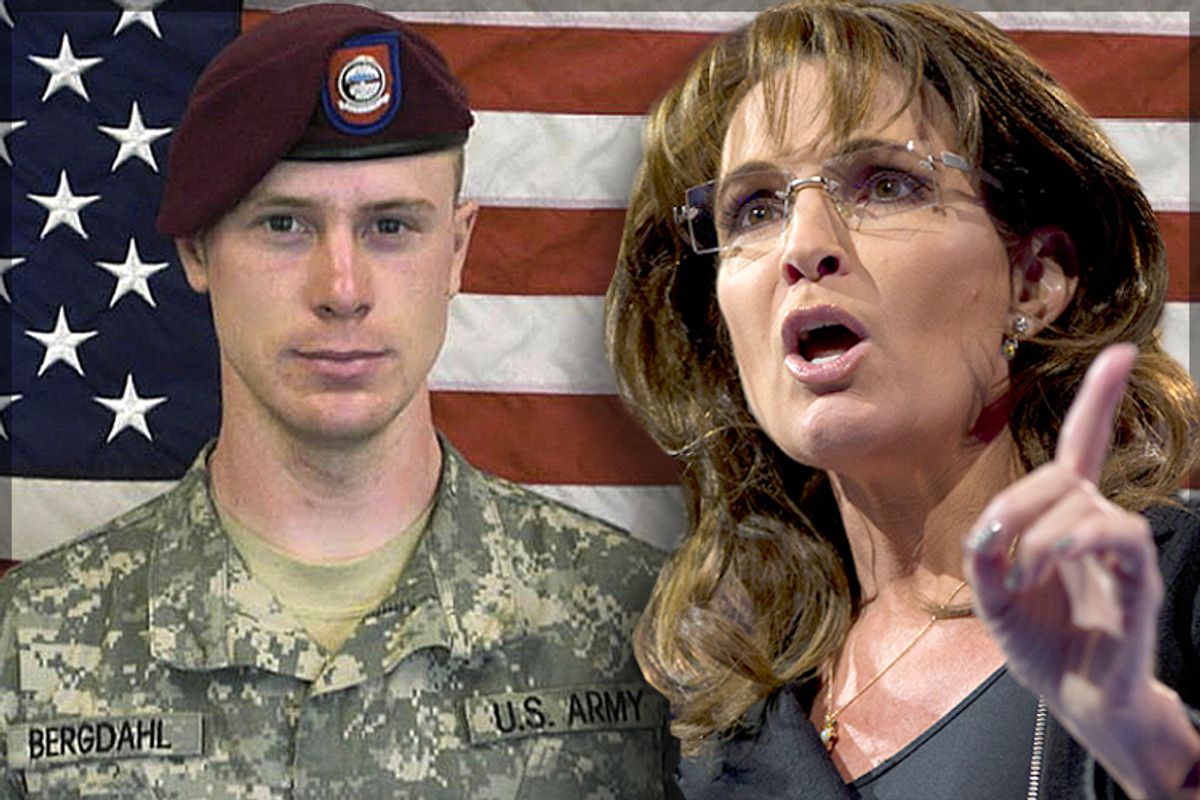 After nearly five years, Bowe Bergdahl, a 28-year-old Idahoan and the last remaining American POW in Afghanistan, is finally coming home. The Obama administration made the announcement during the weekend, framing the deal that swapped Bergdahl for five Taliban-affiliated Guantánamo Bay prisoners as an example of two U.S. promises: to leave no man behind and to finally, mercifully, and after nearly 13 long years, begin to end the war in Afghanistan. For Bergdahl and his family, the move is a blessing. For those who doubt the administration’s commitment to ending the war, it is a reassurance. And for the loudest members of the far right, it is a mistake, a capitulation, a disgrace.

Their argument, in brief: By agreeing to trade prisoners of war with the Taliban, Obama made the U.S. look — what else? — weak. “You blew it again, Barack Obama, by negotiating away any leverage against the bad guys,” wrote the perpetually enraged Sarah Palin on her Facebook page. The deal, argued Palin, had “destroyed troop morale” while causing “Osama Bin Laden's partners in evil crime” to “joyfully celebrate.” What really infuriated the half-term governor and former vice presidential candidate, though, wasn’t so much Obama’s actions as Bergdahl’s. The price the administration paid for liberating him, Palin intimated, was simply too high. He didn’t deserve it. How come? Because he expressed “horrid anti-American beliefs” and deserted his fellow soldiers prior to his capture.

As you might expect from any Palin story, there are some issues. For one, whether Bergdahl found himself under Taliban control because of bad luck, as the administration claims, or because he decided to abandon his post is up for debate. (And keep in mind that, even if he had deserted, that hardly makes it ethical for the government to abandon him to his captors.) For another, Palin’s note about the deal lacks some crucial information — like the fact that the men released from Guantánamo will have to spend at least a year in Qatar, or that the U.S.’s impending cessation of the war in Afghanistan would necessitate the release of the Gitmo detainees anyway. But for all it lacked in terms of responding to this relatively simple news story in an informed, accurate and insightful way, Palin’s angry Facebook missive was great in one respect: It was a perfect example of what happens when soldiers refuse to live up to the far right’s fantasies.

We’re all familiar with how conservatives — but especially extreme ones like Palin — deify, romanticize and claim ownership of the men and women in the armed forces. We all remember the 2004 Republican National Convention, when President Bush all but dusted off that iconic green “Mission Impossible” flight suit in order to portray himself and his party as the sole guardians and stewards of the military. We all remember the countless times during the Bush years when a Republican or a conservative would ask an antiwar Democrat or liberal why they so hate the troops. We expect to see right-wingers genuflect before the Platonic ideal of an American warrior. We expect to hear more stories about Marine Todd.

Less understood is that when a member of the military fails to adhere to the far right’s rigid formula of what a soldier should be (nationalistic, religious, obedient; conservative) right-wingers like Palin come down on them like a ton of bricks. Where they once were heroes of almost mythic proportion, now they become charlatans — or maybe even traitors. During these moments, the far right’s hatred for the apostate soldier can only be understood if it’s recognized as a mirror image of their usual reverence. It’s not just that Sarah Palin is disappointed with Bergdahl for loathing the war in Afghanistan so much that he was “ashamed to be an American”; it’s that she now considers Bergdahl to be someone who is worth so little that the president’s acting to secure his life and liberty is, effectively, an insult to the rest. You know that old truism that nothing can turn to hate as quickly as love? This is what that looks like in politics.

It’s not just Bergdahl and Palin, either. Think about how much the far right loathes John Kerry, how ruthless and vitriolic was its campaign to discredit him in 2004. That had much to do with base tribalism, of course; Kerry was the Democratic nominee for president and thus, to some degree, inevitably the temporary locus of all evil. But it also had much to do with the fact that Kerry first made a name for himself as perhaps the ultimate apostate soldier of the modern era, the man who showed that you didn’t have to be a draft-dodging longhair to consider the war in Vietnam a sinful mistake. John Kerry was a soldier, a decorated soldier, and yet he didn’t consider (the draft-dodging) John Wayne the exemplar of American virtue. His comeuppance for that transgression was a long time coming, but when it came, it was, even for politics, remarkably nasty.

But if you think this might all have more to do with partisan politics and believe, perhaps, that the far right’s hatred for Bergdahl and Kerry says more about the current president and secretary of state than anything else, there are plenty of other, less prominent examples. There’s the veteran who was publicly accosted by gun fetishists for having the audacity to be a military man who nevertheless thinks there’s a right and a wrong way to own a gun. There’s the soldier who failed to live up to the far right’s definition of warrior sexuality and was booed in response. There are the parents and brother of Pat Tillman who, once they stopped being useful props for a story of noble martial sacrifice and started asking justifiably angry questions, transformed into “graceless” and clueless pawns of anti-American filmmakers. There’s Cindy Sheehan.

Taken together, the far right’s dehumanization of the American soldier is clear. If he or she is willing to promote the Sarah Palin version of patriotism, honor and masculinity (or at least allow themselves to be used for that purpose), they are not human beings but rather legends and gods. And if they refuse, they lose their humanity once more, now becoming contemptible beyond all measure. Either way, they are not individuals — complex and mysterious and sacred — but rather means to an end that is, fundamentally, about their self-styled defenders’ ideological satisfaction. This, it seems to me, is an exceedingly twisted way to support our troops.