The ear is on display in a German museum, and was presented in conjunction with a lecture by Noam Chomsky 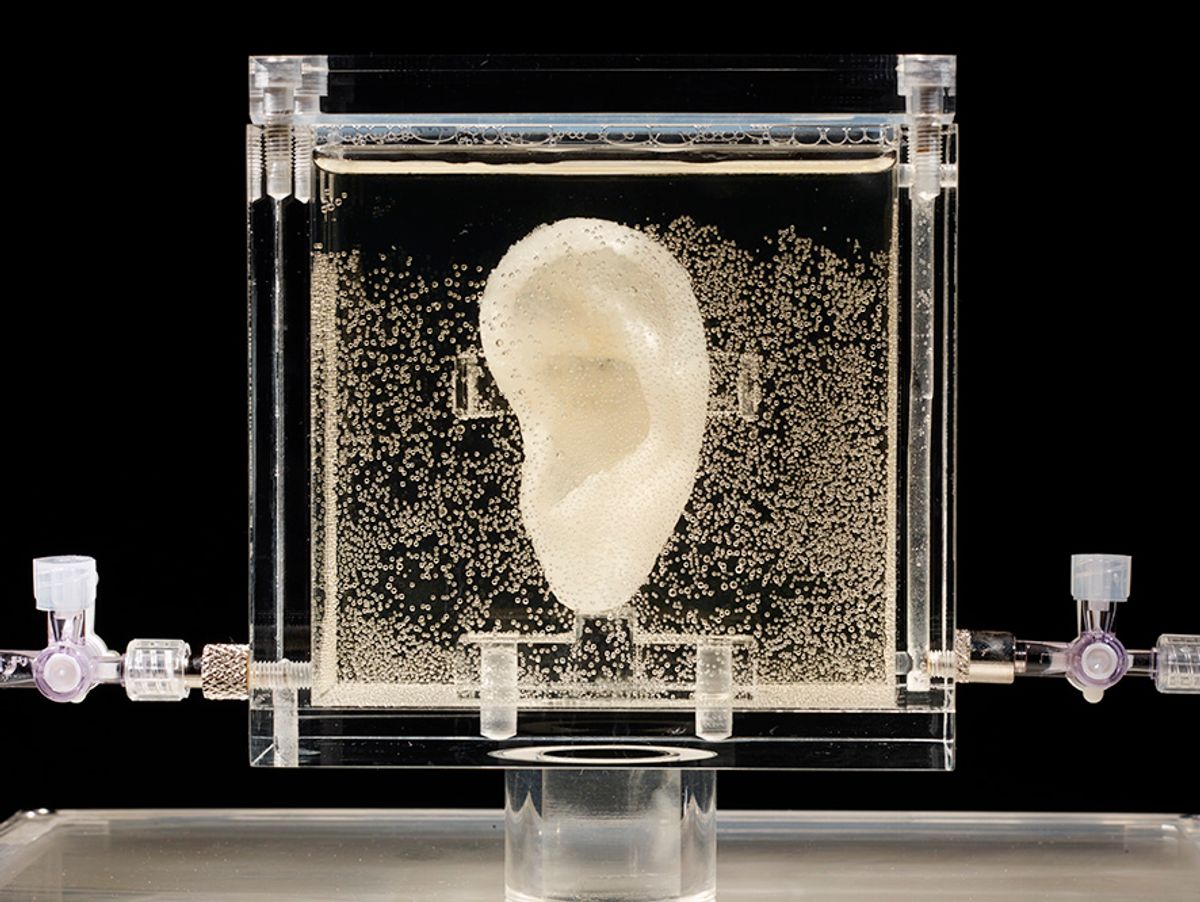 Undated picture shows an ear made of human cells grown from samples provided from a distant relative from Dutch artist Vincent van Gogh, in the center for art and media in Karlsruhe, Germany, Tuesday, June 3, 2014. US based artist Diemut Strebe said she wants to combine art and science with the installation. ((AP Photo/Diemut Strebe.Sugababe))
--

Many know Vincent van Gogh as a brilliant impressionist painter, whose many works are displayed in museums across the world. Van Gogh has also come to embody the quintessential tortured creative genius -- and for infamously cutting off his left ear in a fit of madness in 1888.

A different museum exhibition showcases the anguished creativity of van Gogh in a far more unusual way: Currently a recreation of van Gogh's left ear is on display at The Center for Art and Media in Karlsruhe, Germany.

Artist Diemut Strebe used cells from the great-great grandson of van Gogh's brother, Theo, and other DNA to construct a living replica of the ear. The ear was created using a 3D-printer and was grown in Boston's Brigham and Women's Hospital. The ear is currently being kept alive inside of a case full of nourishing fluids, according to the Associated Press, and could "theoretically last for years."

Vincent van Gogh's descendant, Lieuwe van Gogh, was apparently readily interested in the project, Strebe told the Associated Press. Lieuwe has 1/16 of the same DNA as Vincent, including the Y chromosome passed down through the male line.

The project, which is a seamless combination of science and art, was nearly dashed when DNA from an envelope provided by the The Custodia foundation in Paris, turned out not to be from Van Gogh. However according to the museum:

"[F]or the principal of replacement it does not matter whether the historical material stems from Vincent van Gogh or anyone else. At this time, only sequenceable (sic) historical nuclear DNA, typically derived from bone marrow or teeth, has the ability to replicate and to function within the genome of a living cell line. Consequently, the historical mtDNA from the van Gogh-envelope was used in both a symbolic and to a certain degree conceptual manner."

The ear, part of the work "Sugababe," was first presented on May 30, in conjunction with a lecture by Noam Chomsky. As part of the exhibit viewers can speak to the ear through a microphone. Once the sound moves through the solution of nutrients and hits the ear's artificial nerves, the words change and the sound -- as the ear hears it -- is then produced in an audio installation.

h/t Associated Press, The Center For Art and Media in Karlsruhe