If we're stuck in a society where everyone's watched, at least we can watch the President being a real person 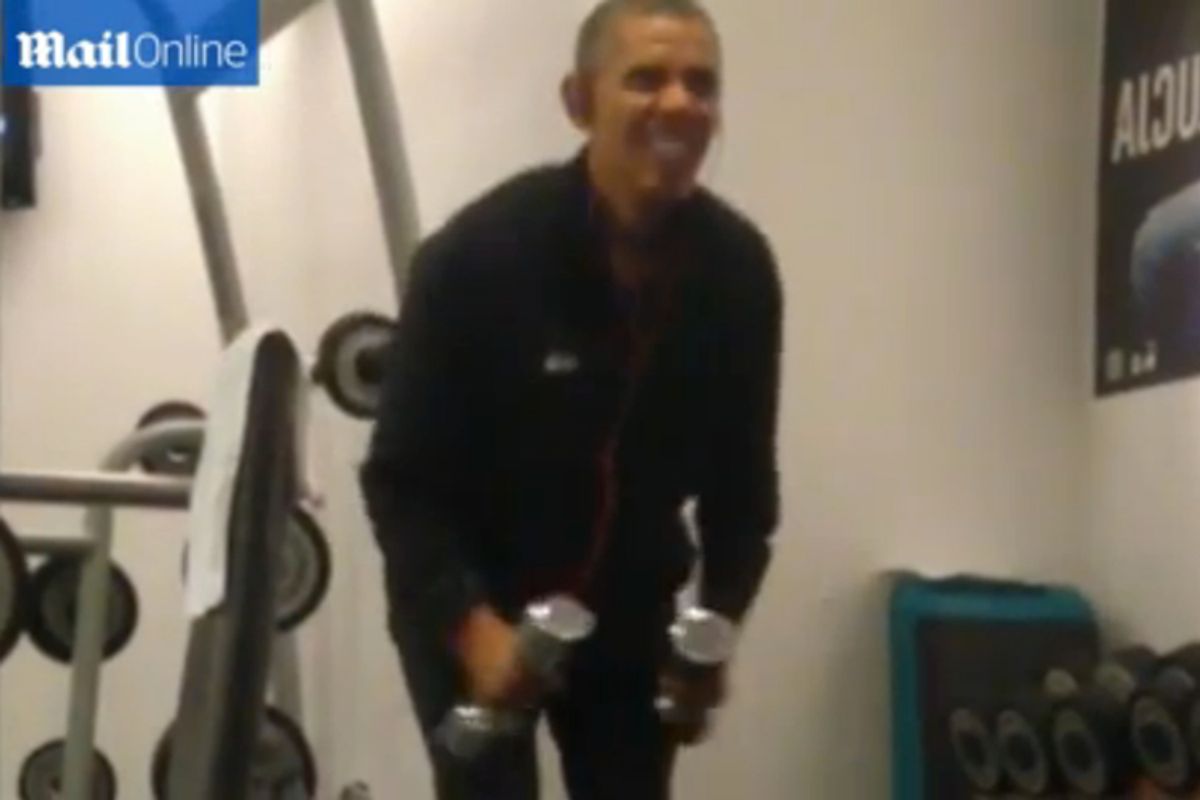 The newly released video of Barack Obama working out at a hotel gym is among the strangest pieces of art of the year.

Obama, captured surreptitiously on a break from his official duties in Poland, seems to take great pleasure in lifting free weights. He's listening to headphones as he leans over the rack at some length to choose his weights, then doing a variety of exercises at a reasonable but not aggressive pace -- seated lifts, step-ups, a fly exercise with small dumbbells that elicits Obama's grimace.

Other than his one moment of workout-face, Obama seems completely calm, and not just in the "cool customer" way he's been pegged since his election in 2008. He seems, uncommon for a person generally praised for his hipness, rather like a daddish dork -- scrupulously going through his paces with close attention to form but hardly killing himself at it.

The moments in the past when this side have come out have felt rather like mockery, as with still photographs of the president's so-called "mom jeans." This video exists beyond an axis of coolness vs. uncoolness, because Obama seems so genuinely engaged in what he's doing and because he's not in a setting where he's anticipating being judged, so all the fair-minded person may do is marvel -- this person we're accustomed to seeing give speeches or participate in stagey talk-show bits is not just real but corporeal. It's the most genuine moment we've seen from Obama in years.

This is a person who doesn't realize he's being surveilled -- a state of being that renders every previous moment of Obama we've seen dubious. It's the video equivalent of Bill and Hillary Clinton dancing on the beach, a video with no meaning in and of itself whose subtleties allow the mind to spin out in a million directions.

If our future is one of constant surveillance, this is the one upside -- the preceding media age, which had brought with it a mass media totally disconnected from quotidian viewers, provided public figures infinite opportunities to craft their own images, and increasingly less genuineness. Given that we're not going to be able to turn back the clock to a time during which politicians appeared in public more sparingly and with less glaring artifice, these sort of videos are the only reward we can wring out of the camera-in-every-cell-phone age. That the commander-in-chief who oversaw the PRISM surveillance program is the one we're able to watch now is a neat little irony.

Leaked videos and tapes -- of Justin Bieber using racist language, of Donald Sterling doing so too, of the Solange/Jay Z elevator brawl -- have been yet more prevalent than usual in the past weeks, for whatever reason. And yet the Obama video is far more innocent than any of those -- after all, it's a video of a public figure in a public space doing nothing about which he ought to be embarrassed. Obama is the president and the most famous man in America, but he's also just a body. I have no idea what good weightlifting form is, but I'll be parsing this video for weeks.