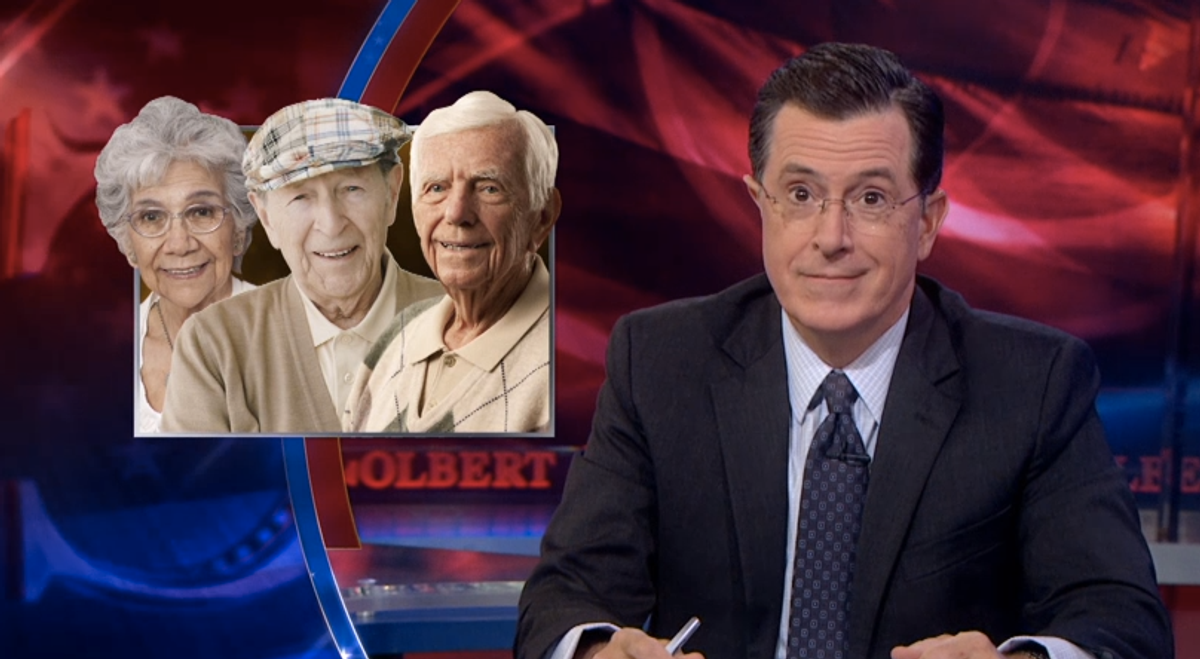 While "The Colbert Report" is generally excellent at mocking the irrationality of rightwing America, once in a while, the show is undermined by its own satire -- are we laughing at the idiots who believe these stereotypes, or are we just manipulating the stereotypes so that we can feel comfortable laughing at them, too? It's a question that was raised against Stephen Colbert when he generated laughs by using Asian stereotypes, launching the #CancelColbert on Twitter. The hashtag movement that was largely dismissed as frivolous, however, because the target in the case was clear: racism of the Redskin name, and the obvious offensiveness of an Asian name joke mocked the ignorance of the Redskins owner. But on Tuesday night, "Colbert" did turn in on itself with a segment highlighting sex reassignment surgeries that are now covered by Medicare.

Colbert jumps the gun, assuming that his liberal audience is on-board with trans-inclusive healthcare and understands the importance of the surgeries themselves, as well as the policy change. "Even more disturbing than the idea of Nana and Pee-Pop playing Mr. Potatohead downtown is that it violates the tacit agreement we have reached with the transgender community," Colbert jokes, "I agree to be totally cool with it -- which I clearly am [footage of his interview with trans activist Janet Mock], which Time Magazine clearly is, and which all the people lobbying for this transgendered woman [Carmen Carrera] to be a Victoria's Secret model clearly are -- as long as you are hot."

Colbert is attempting to move to another phase of the trans movement, working on getting trans people who might not look as flawless as Cox, Carrera and Mock do, in front of the camera. But his jokes rely on the conceit that society is on the same page about trans people as he is -- Colbert may get it, Time may get it, some people on the Internet get it. But Time also declared the issue "America's next civil rights frontier," implying that there is still a significant struggle ahead for trans people to gain mainstream acceptance. Most media outlets and personalities are still getting the framing of basic trans issues wrong (even within "Colbert"--the preferred term within the trans community is "sex reassignment," not "sex-change" surgery), while companies are issuing transphobic ads like this, without understanding why they're offensive. We're talking about a community who faces significantly higher rates of bullying, violence and suicide than the general public. So it's not safe to assume, yet, that even Colbert's liberal-leaning audience really, truly "gets it."

That's why describing sex reassignment surgeries as horrific, like "grandma's human-centipede surgery" or reducing them to "playing Mr. Potatohead downtown," or comparing the surgery to an androgynous old man in a mumu, is hurtful. Julie Rei Goldstein, a trans activist who has discussed the media representation of trans people with Salon before, wrote via email that "The problem with evoking these stereotypes is that there is still a problem of basic education in the public. You can't expect people to discern what is satire and what are facts when only around 10 percent of people know someone who is Transgender."

Maybe in 20 or 30 years progressive America will find those descriptions of trans healthcare to be as absurd as an overtly racist Asian name joke, but that won't happen until we educate ourselves. And we've still got a way to go on that front.