"Orange Is the New Black": Season 2 shows us what the "golden age" of TV really means 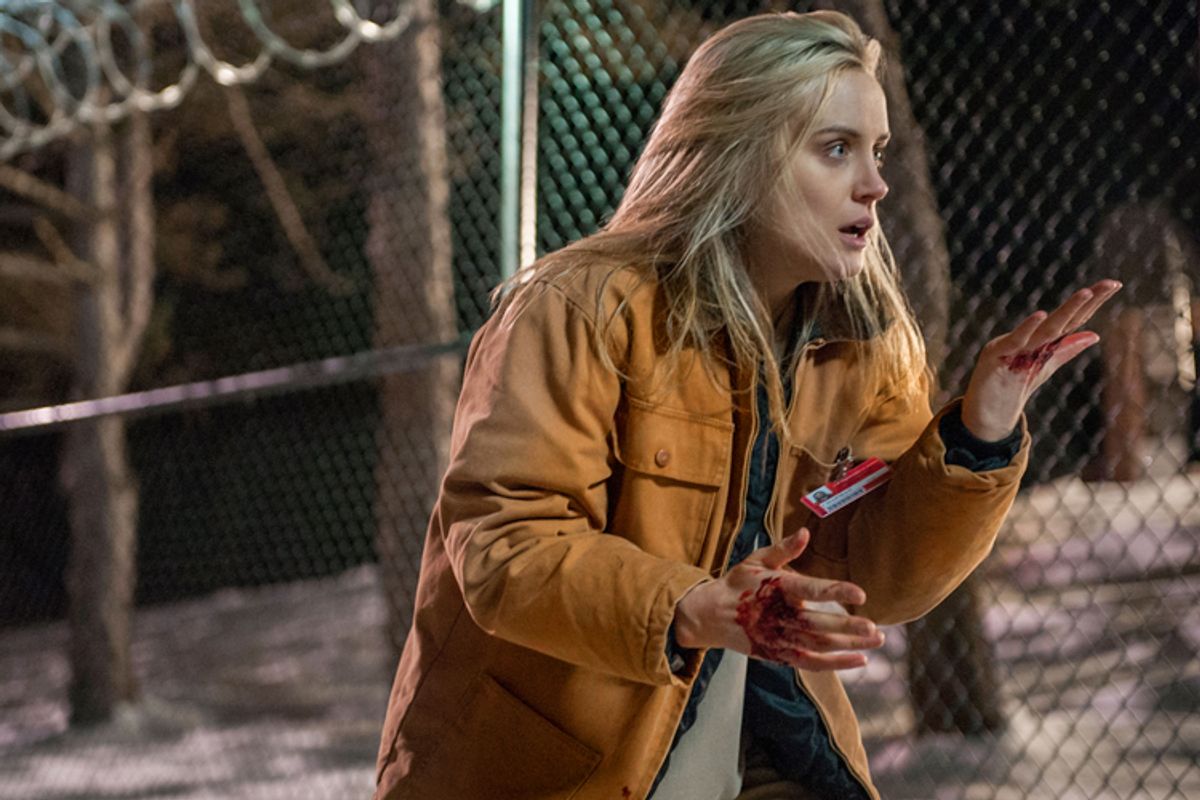 (Very mild spoiler for "Orange Is the New Black" Season 2 ahead.)

Now that television has definitively moved to the center of our cultural conversation, bestriding both the New York Times bestseller list and the latest big-screen superhero fisticuffs like a colossus, the question of whether the golden age of television is over or just beginning feels a little moot. There are such smart, original, high-quality TV shows floating around, and so many of us are watching the good stuff, that it’s hard to argue against the medium’s merit or its significance. But the second season of Netflix’s “Orange Is the new Black” somehow manages to make yet another argument for the cultural supremacy of TV.

While the networks seem caught in a never-ending loop of mediocrity fed by panic at dwindling ratings, premium cable, basic cable and innovators like Netflix and Amazon have learned a thing or two about sustainability from the networks’ failed experiments. The best show runners are turning to these new distribution channels and applying everything they’ve learned about balancing mystery against lasting intrigue, flash and thrills against narrative resilience, skin-deep darkness against meaningful weight, gimmick against engrossing microcosms. But what’s particularly fascinating about this particular point in TV’s evolution is that wonderful new shows can be at once groundbreaking and vivid and entrancing -- and still, at times, disappoint us. We are seduced by the fresh perspectives on display, but the landscape is untamed enough that we inevitably encounter tonal inconsistencies and narrative dead ends therein.

“Orange Is the New Black” represents everything fresh and promising and also thorny about what we must now accept as TV’s lasting, sustainable golden age. Because "OINTB" is both compelling and wonderfully rendered and also problematic and uneven, in ways that are impossible to avoid. First and foremost, it is, needless to say, exactly the kind of show that would never get made by the networks, and probably wouldn’t even be considered by most premium cable outlets. A few years ago, you could only dream of selling a TV show about a big, unwieldy gaggle of women, many of them over age 35, many of them regular-looking, many of them lesbians, many of them brown and black and every shade in between, and most of them foulmouthed, irreverent, recalcitrant criminals.

But "OITNB" also offers that just-right modern mix of comedy and tragedy, levity and seriousness, issues and emotions, episodic thrills and overarching narratives, forward motion and back story.  Starting with Piper Kerman’s memoir and building it out into an ensemble drama was a stroke of genius, freeing creator Jenji Kohan from the repetitive, gimmicky nature of “Weeds,” a hilarious one-trick pony that was pretty tough to ride into the sunset under any circumstances. From the initial concept and material, Kohan and the other writers fleshed out a full roster of intriguing female characters audiences had never met before, and Kohan cast the parts brilliantly – Natasha Lyonne! Laverne Cox! Kate Mulgrew! Laura Prepon! (Even when she’s deadpanning, which is most of the time, somehow she makes it work). These are actors an audience can’t peel their eyes away from.

With its second season now premiering, "OITNB" now has everything it needs to keep us in its thrall – a compelling, colorful and not totally bleak microcosm inhabited by great characters played by great actors. Like the back stories on “Lost” during its stellar first three seasons, "OITNB’s" flashbacks are the highlight of the show, thanks to the ways they reveal the backgrounds of each character and deepen our understanding of their motivations in thoughtful ways. Throw in the twists and turns in present day – Burset angles for estrogen pills, Chapman hunts a chicken and avoids her crumbing relationship with Larry, Vause turns on the charm, Red loses her spot in the kitchen --  and you’ve got a winning formula, even when every single engine isn’t firing at full power.

And that’s fortunate, because in spite of all of its strengths, "OITNB" served up plenty of cringe-inducing moments in its first season. As great as the flashbacks and the central plots were, scene after scene at the prison seemed to devolve into witty zingers, high-fiving and laughs all around. Whether it’s a “tribal thing” or not, racial jokes have a tendency to fall a little flat, particularly when repeated over and over and accompanied with a round of appreciative laughter by all involved. (“Black boys, they got some serious trouser meat, like, yo!”) Sinister born-again Pennsatucky felt particularly cartoonish and deeply unsympathetic, and her battle with Chapman came off like a cheap ploy to wrap up the first season. Despite the highs of the first season, the show tended to turn its back on its own built-in weight and melancholy in favor of a strangely soulless toggling between slapstick and solemnity, sisterhood and selfishness, manic comedy and abrupt, frank emotional confessions.

And the first season of "OITNB" also demonstrated the limits of binge-watching. When it’s possible to watch a full season of a show in one week, the limits of that show are on clear display. Those cafeteria scenes of high-fiving and snickering sometimes seem to blend together into one endless bit of prison performance art, interrupted when one character or another is tricked into criminal acts by a bad, bad man. Binge-watching puts a lot of pressure on TV writers to tell a wide variety of stories – not always possible, when you’re talking about one “How She Landed in Jail” story after another.

And it shows. The second season of “Orange Is the New Black” is much less like a manic, comedic prison-themed episode of “The L-Word” and much more of a smart drama that respects itself enough to lean into its heavier moments without always retreating to the safety of one-liners. In its second season, the comedy of "OITNB" feels more like the comedy of “The Sopranos”; it’s not meant to undercut the darkness so much as sharpen the contrast and turn up the dial on the show’s overall emotional impact. When Chapman encounters a whole new level of sinister prison relations and Lorna sneaks away to see her fiancé and Red rebuilds her prison life outside of the kitchen, the mood isn’t quite as lighthearted as it might’ve been in the show’s first season.

And that’s a good thing. There’s less high-fiving and more digging deeper into what makes each character tick, and how their friendships shift and change, and how they realign themselves with new allies, against new enemies. One of my favorite scenes from the first season features Natasha Lyonne’s character, Nicky, informing a grumpy Chapman that she’s ungrateful to be whining about her mother’s latest visit, since some people’s mothers don’t visit at all.  “We all have our shit, Nicky,” Chapman tells her. “Your shit smells like Shalimar,” Nicky replies. “Must’ve rubbed off when she hugged you goodbye. What a bitch.” This is "OITNB" at its best, and it demonstrates the dominant mood of the show’s second season. Just when you think that you understand a particular character’s heartbreak, another very different character enters the picture and challenges that perspective dramatically.

A similar scene unfolds when Chapman finds herself rooming with Red in the second season. “Nobody has any idea what to say to me,” Chapman says of her evasive friends and family, who’ve grown tired of visiting her. “People are fickle fucks,” Red growls. When Chapman protests that she understands why people stay away -- because she’s behaved selfishly -- Red replies, “You have to be selfish in here. That’s how you survive. Because loyalty means nothing. Because the second you’re not useful to them, you’re out.” This riveting contrast of attitudes underscores something we see over and over again in Kohan’s narrative: Just when one of the inmates feels like she’s found a safe place to rest, that safe place is whisked away and replaced by a fresh sense of unease.

What started as a fairly bubbly experiment in Netflix-branded dramedy, in other words, has matured into a smart drama about long-term friendships and opportunism, loyalty and nihilism and the loneliness of old age. With such big themes in play, “Orange Is the New Black” has evolved from a temporary diversion to a show that feels capable of building a lasting, devoted audience with a sustained investment in its characters. But that makes sense, because Kohan's characters are more fleshed out and richly imagined than so many of their counterparts on cable, each one buoyed by a resistant flavor of optimism in the face of potential doom.