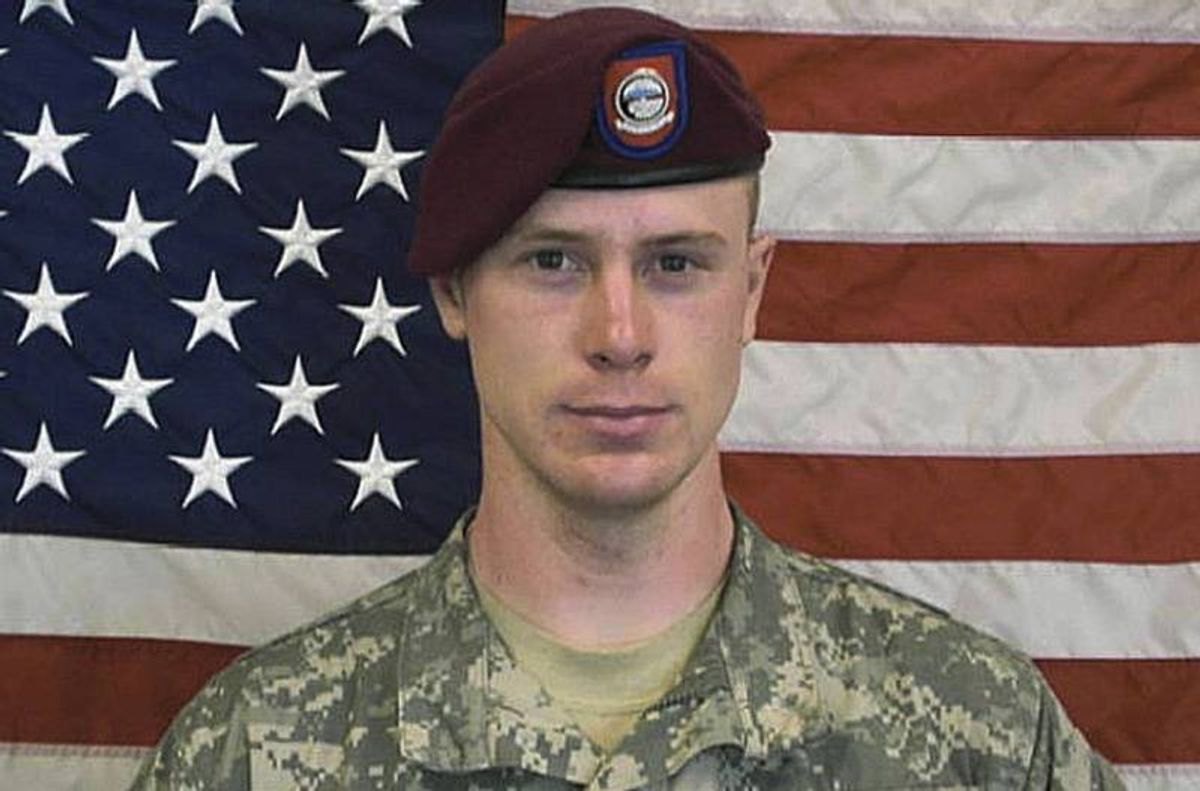 America’s last POW was released over the weekend in exchange for five Guantanamo detainees, after nearly five years in captivity.

It has not exactly been a resounding success. Army vets are complaining bitterly about the welcome that Bergdahl seems to be receiving. The young sergeant, they say, is no hero — rather, he should be labeled a deserter.

Meanwhile, conservative politicians and commentators raised the alarm about the “dangerous terrorists” that were exchanged for Bergdahl’s freedom.

Former congressman, retired Army officer and perennial Barack Obama-basher Allen West contributed what might have been the strangest “fact” to the debate.

When Bob Bergdahl, Bowe’s father, spoke at a news conference in the Rose Garden, he uttered an Arabic prayer, words that begin just about every occasion in the Muslim world: “Bismillah ar-rahman ar-rahim.”

Bergdahl senior said it was for Bowe, who was having trouble speaking English after his ordeal. But West insists that it meant that the elder and lushly bearded Bergdahl had “sanctified the White House and claimed it for Islam.” What’s more, Obama smiled when Bergdahl said it, and we all know what that means.

“Folks, there is a lot to this whole episode — like Benghazi — that we may never know,” Westwrites. “And this is not conspiracy theory, it is truth based upon Arabic and Islamic dogma and tradition.”

Before the wackadoos run away with the debate entirely, there are some actual questions that need answering.

1. Is Bowe Bergdahl a hero or a traitor?

The controversy over Bergdahl’s disappearance has been in the public domain since at least 2012, when Rolling Stone ran a lengthy profile of Bergdahl, complete with reports by his fellow soldiers alleging he walked off base of his own accord on the morning of June 30, 2009.

By all accounts, Bergdahl was a troubled young man, with naive and very unrealistic views on his service in Afghanistan. He thought he was joining “the Peace Corps with guns,” going over to help Afghans. What he found instead was an ugly, brutal war.

Rolling Stone quoted emails he sent to his parents:

"We don't even care when we hear each other talk about running their children down in the dirt streets with our armored trucks … We make fun of them in front of their faces, and laugh at them for not understanding we are insulting them."

Bergdahl called the US Army “the biggest joke the world has to laugh at … the army of liars, backstabbers, fools and bullies.” He said he was ashamed to be an American.

Disappointment in America’s flawed efforts in Afghanistan is not a sign of mental illness. But, as journalist Matthieu Aikins, who reports regularly from Afghanistan, tweeted: "Does running unarmed into Taliban terrain seem sane to you? Maybe Bergdahl's act should be seen through PTSD/mental health prism."

This will not appease Bergdahl’s fellow soldiers who are angry and bitter over the whole affair. Six soldiers died trying to find Bergdahl after he left base, as fellow battalion member Nathan Bradley Bethea recounted in The Daily Beast.

Within hours of Bergdahl’s release, a petition had been filed at whitehouse.gov to “Punish Bowe Bergdahl.” As of Tuesday afternoon, more than 11,000 people had signed.

Once Bergdahl is home, a more thorough assessment can be made of him, and a decision will be made as to whether or not he will face disciplinary action. The Army released a statement Tuesday promising a “comprehensive, coordinated effort that will include speaking with Sgt. Bergdahl to better learn from him the circumstances of his disappearance and captivity.”

But, as more than one commentator has noted, five years in Taliban hands may be punishment enough.

2. Did the White House violate US policy against negotiating with terrorists in securing Bergdahl’s release?

The general consensus, with (ed. note: While Tapper mistakenly thought the Taliban was a DTO, he was corrected on air, and has expressed no public position about negotiating with them)  Fox News’s Chris Wallace weighing in, is that the Taliban is a terrorist organization, and talking to them is, or should be, out of the question.

This may be emotionally satisfying, but it happens not to be true. The Afghan Taliban has never been designated as a terrorist organization, either by the United States or the United Nations. It is, instead, an enemy combatant.

Bergdahl was not kidnapped, he was not held hostage; he was a soldier taken prisoner by the other side in an armed conflict, much as the five Taliban released from Guantanamo were.

Negotiating with an opponent in an armed conflict is a normal process of war, as is prisoner exchange.

3. How dangerous are the Taliban who were released?

In 2012 John McCain called the Guantanamo Five “the worst murderers in human history,” according to Rolling Stone.

The five men, who are now in Qatar and barred from traveling for a year, do not really live up to their monster billing, however.

Kate Clark of the Afghanistan Analyst Network spent weeks researching the five men’s biographies in 2013, and came up with a much more nuanced picture.

“It is mystifying to know where the Guantanamo Bay authorities got the idea that Khairkhwa was known, in their words, as a ‘hardliner in terms of Taliban philosophy.’ During the Emirate, he was considered one of the more moderate Taliban in leadership circles,” she writes.

Wasiq was taken in a sting operation — according to Clark, he was cooperating with the US at the time and was trying to arrange reintegration with the new government. Instead, he was arrested and sent to Guantanamo.

The Guantanamo Docket, a project of The New York Times based on the WikiLeaks documents, also yields some interesting information.

Omari, for example, was a minor Taliban figure who said he was selling used cars when the war started. He also claimed that he was given $500 and a cell phone by a CIA officer named Mark and told to go find Mullah Omar. When he failed to deliver, he was arrested.

Not a very impressive background for what the media are calling the “worst of the worst.”

4. Is the Bergdahl release the first step in Obama’s final push to close down Guantanamo?

Shutting Gitmo was a campaign promise of then-Sen. Obama. Five and a half years later, men are still being held indefinitely, without charge.

The president had been hamstrung by Congress, but may now have decided to exercise the powers he gave himself in a “signing statement” he issued last December, when he failed to follow through on a threatened veto of the National Defense Authorization Act. Obama let stand certain limitations on his authority to release or transfer prisoners, but retained the right to act on his own discretion when he felt the situation warranted.

Now that the president has shown he can bypass Congress, he may be prepared to go all the way, argues Josh Rogin in The Daily Beast.

He quotes a senior GOP senate aide as speculating that Bergdahl may have been just the beginning:

“This whole deal may have been a test to see how far the administration can actually push it, and if Congress doesn’t fight back they will feel more empowered to move forward with additional transfers,” the aide told Rogin.

Perhaps The Onion said it best, quoting a fictional man-on-the street professing his outrage at the deal.

“It’s unconscionable that we’re releasing these Gitmo detainees now for a prisoner swap,” says ‘Stan McGinty.’ “Legally they should have been released years ago for nothing.”