Thad Cochran's chances in a runoff against his Tea Party opponent don't look good. Will his backers give up on him? 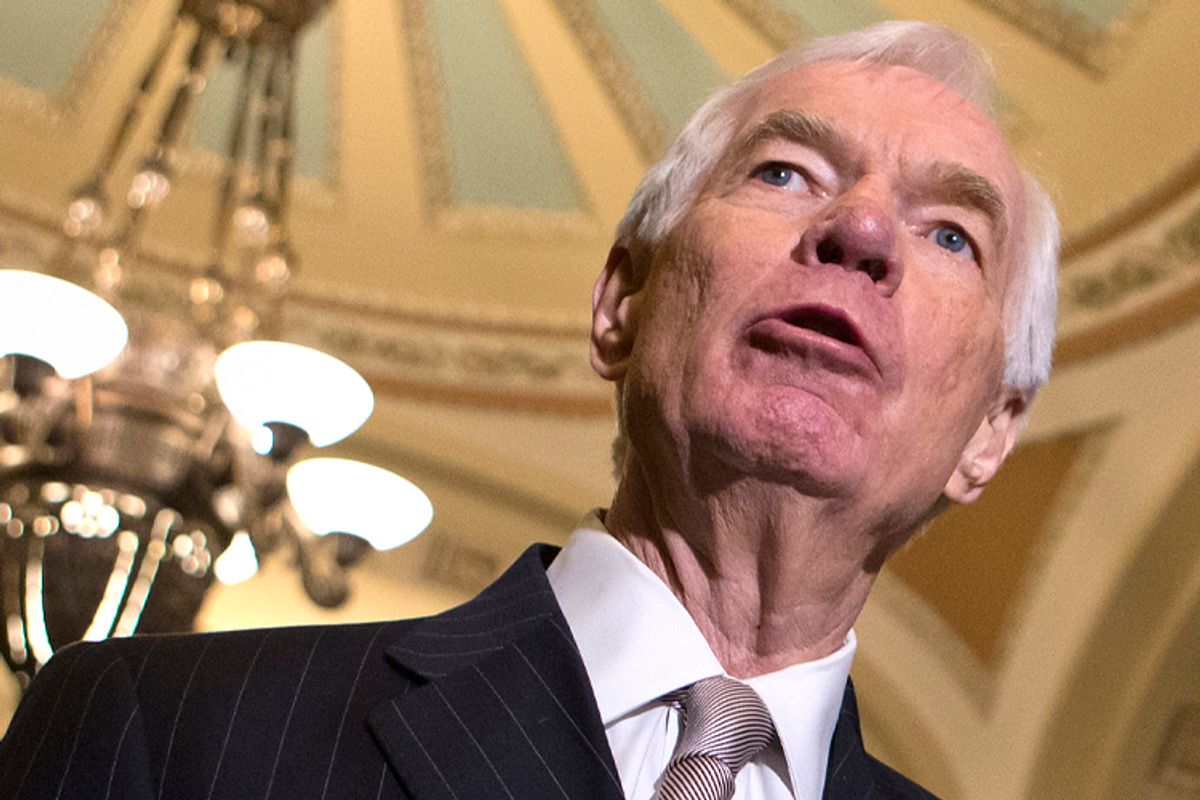 The big question in GOP circles, now that the Mississippi Senate primary between Thad Cochran and Chris McDaniel is headed to a runoff, is how much should Cochran's outside backers spend to prop up the candidacy of an old man who has no idea what's going on, and is is more likely than not to be the eventual loser?

There's a lot to consider here. (You have permission to be amused.)

As we wrote yesterday, all indicators point to McDaniel, the Tea Party challenger, having the upper-hand in the June 24 runoff. First of all, he did beat Cochran by a couple thousand of votes in the primary -- he just didn't quite reach the majority needed to win outright. Then you have to consider that incumbents so far this year have fared poorly in runoffs, as their challengers' supporters are generally more energetic about going through the laborious process of showing up at a polling station and pulling a lever for a second time. (Democracy is very exhausting work: Drive here, wait in this line, pull this lever, drive home -- who needs this?) On top of that, Democratic and independent voters who preferred "Thad the Impaler" will not be allowed to vote in the GOP runoff, as they were able to in the primary.

Lastly, let's look at the broader picture: If Cochran wasn't able to bury McDaniel when a legitimate scandal was fresh in voters' minds, how's he going to fare as that episode recedes from the public spotlight? How much longer can Cochran's aides keep him from debates and from reporters without growing murmurs about whether the incumbent is really up for this?

This race remains the last best hope for national "Tea Party" groups -- the Club for Growth, FreedomWorks, Senate Conservatives Fund, etc. -- to knock off an incumbent senator this primary cycle. And that's their raison d'être. They will absolutely break the bank on this one if required.

Knowing that, the main consideration for Cochran's backers -- the Chamber of Commerce, the NRSC, and various prominent state officeholders -- can't just be pride. It has to be about ensuring that an (R) eventually beats the (D) in its quest to win a Senate Republican majority. And going all-in for Cochran in the primary would require a sort of vicious assault on McDaniel that's risky: If McDaniel still prevails, he might come out so damaged that the general election matchup against former Democratic Rep. Travis Childers would be competitive. The GOP does not need to have a competitive race in goddamn Mississippi to worry about if it wants to retake the Senate.

As Politico reports, the question among Cochran's backers isn't necessarily about whether they'll continue supporting him -- they will -- but how far they're willing to go:

But left unsaid by all parties Wednesday was precisely how much money Republicans might continue to pump into the race, whether they believe Cochran and his operation can sustain a three-week sprint to the next ballot – and just how intensely Republicans are willing to target a challenger who may end up as their nominee.

Kansas Sen. Jerry Moran, who chairs the National Republican Senatorial Committee, said Wednesday he continues to believe Cochran would be a far better general-election candidate than McDaniel. At the same time, he expressed deep reluctance to go after McDaniel in the runoff.

“If Sen. Cochran has the Republican nomination, I think it’s just nearly – it’s just so highly likely that he is reelected and continues to be a senator,” Moran said. “If McDaniel is the nominee, then I think it’s a much more difficult race, but we will be supportive of the efforts to reelect a Republican in November.”

Asked if it made sense to attack McDaniel over the next three weeks, as the NRSC did during the primary, Moran said: “It does not to me.”

How dangerous a general election candidate would Chris McDaniel be? After all, the Chamber of Commerce has mostly made its endorsements and leveled its support based on the general election viability of Republican candidates -- weeding out "goofballs," in their chief political strategist's words. (They don't care if their endorsees happen to trash the Chamber's top legislative priorities. Just don't go too far out of your way to be a complete and total moron.)

What are we to make, then, of Chris McDaniel's propensity for making a "Rape is God's plan!"-style death-gaffe down the stretch, especially when he'll have a viable challenger in a former Democratic congressman?  Analyst Sean Trende considers this in a smart piece at Real Clear Politics:

To be sure, there are warning signs. He expressed skepticism regarding hurricane relief, which could play poorly on the Gulf Coast. He has also spoken in front of groups associated with neo-Confederate causes (though McDaniel has disputed this). I’m not sure this latter point hurts as much as many think: This is Mississippi, a very rural state where there simply isn’t as much of an upscale, suburban white vote as there are in many other states.  That’s not to say that Mississippians are a bunch of neo-Confederates. It is simply to say that the act of speaking in front of such a group may not be the death knell that it would be elsewhere.

Right. In Mississippi, speaking to neo-Confederates is maybe a *touch* more controversial than breathing oxygen. On net, it's probably been a boon in a Republican primary.

It's his "skepticism regarding hurricane relief," and, more generally, his outspoken aversion to pork barrel spending and outsized federal appropriations for Mississippi that's more concerning. In a Republican primary, rejecting the federal favors that Thad Cochran's been bringing home for 40 years sounds principled to a Tea Party-ized electorate. The general electorate, though, may hear these statements and ask, What the hell? We like free money! Outside the Tea Party bubble, Free Money is generally recognized as wonderful!

But let's not get ahead of ourselves: This is Mississippi, in a non-presidential year, in a cycle that generally favors Republicans. Any Republican candidate who remembers to put on pants before leaving the house in the morning shouldn't have all that much trouble discarding a Democratic opponent, even one who did put in a whole 1.5 terms as a congressman a while back. Expect Cochran's backers to support him just enough to avoid the appearance of total abandonment.