"After," just bought by Simon & Schuster, is one small corner of the very hormonal world of Harry Styles fan fic 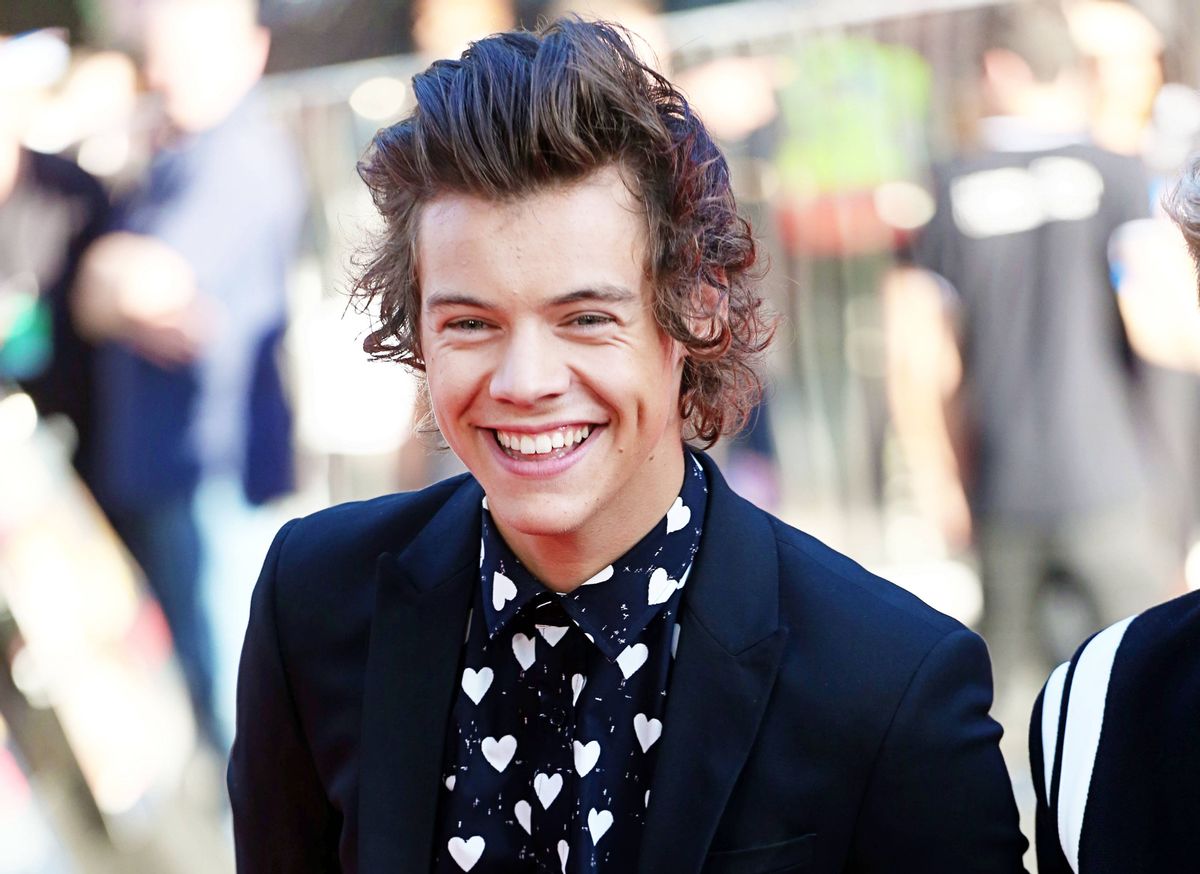 Anna Todd, the 25-year-old author of One Direction erotic fan fiction who just scored a major book deal, may be the new E.L. James. Where "Twilight" served as James' inspiration, Todd's muse is shaggy-haired, pixie-faced One Direction frontman Harry Styles. Todd's year-old Wattpad project, "After," has gone viral, having been read more than 800 million times, leading to her three-part volume and a six-figure deal with Simon & Schuster. (Brace yourselves: A movie and television adaption may be on the way, too.) According to the synopsis on Wattpad, the book is about a college freshman who meets a "rude boy named Harry, with too many tattoos and piercings, who shatters her plans." Spoiler alert: They have lots of sex.

I reach my hand down in between us and grab ahold of him. He winces and pulls my lip between his, sucking lightly. I decide to take a page from the Harry Styles sex handbook and grip him harder.

"Apologize and I will give you what you want." I say as seductively as I possibly can into his ear.

"What?" His face is priceless.

From there it gets a lot more graphic. Todd's raunchy tale apparently stood out from the trove of other Harry Styles fan fiction, including stories in which he's clinically insane, a stalker and even a pedophile. Humans are weird! So here are six popular works of One Direction fan fic that probably won't be hitting the big screen any time soon:

Harry Styles is the most popular guy in school. Every single girl wants him, and every guy wants to be his friend. Also, he is a major badass, from parties, to occasional drugs, and sex. Katie Smith is quiet and unassuming. But when Katie and Harry are forced to go on vacation together, they become closer then they ever thought they would be. In more ways than one.

She moved her hand into a more comfortable position after a little while but we continued dancing together. I cant even really exactly process what is going on right now, all I know is I like it, I like it a lot. Just then, completely by coincidence, the song “I like it” came through the speakers.

Presley Davis became a viral star from a YouTube video she made as a dare. But what she doesn't know is that she has her own stalker: Harry Styles. What will happen when these two cross paths?

"What do you call a Mexican with a rubber toe?" [Harry] asks, grinning.
"What?" I say, in monotone.
"Roberto!" He says before he starts laughing at his own joke.
"That's so racist!"
"I've been waiting all dayyyyyy, for you to call me babayyyyyy!" He sings really loudly.
"Harry, are you on drugs?" I ask.
"No, can I have a lick of your ice cream?" He says, eyeing my ice cream.
"No! It's mine!" I put it out of his reach when he tris reaching for it. He grabs my arms, trying to get my ice cream. His hand hits it and it falls to the ground, already starting to melt.

Everything in Juliet's life was perfect until her roommate's  cousin moved in, a sexy bad ass named Harry Styles. Juliet swore to herself that she wouldn't let herself fall for him, but she did. And what happens when a past forgotten high school lover comes back for revenge?

"Babe why are you over thinking this?" Harry asked me one night as we were cuddling in bed.

I sighed, burying myself deeper in Harry's embrace.

I had other things in my mind like mine and Harry's anniversary was like two weeks away and I still had no idea what to do.

In this corrupt dystopian world, young girls are sold to men as objects of pleasure and kept for as long as the men desire. But things take a turn when a young woman crosses paths with the spoiled son of a wealthy businessman. Name: Harry Styles.

I couldn't speak, let alone protest against Harry's actions. My wrist was still constricted by his hand when we reached the door of a bedroom. I blamed myself for blindly believing that I would get to go back home.

Harry Styles is a psychopath in a mental institution.

"Why are you talking to me?" I asked abruptly. He was a little taken back and raised his eyebrows, only to have them come back together in thought.

"I don't know," he shrugged. "The guards are no fun to talk to and everyone else in here is insane."

"I never said that."

I didn't reply as he took a long drag of his cigarette with the color of it looking whiter as usual against his rosy lips. "So why are you so afraid of me? You have no reason to be, you know."

I shook my head, confused. The reasons were obvious. "Well for starters you skinned three women-"

"And you believe that?" Harry interrupted, raising an eyebrow again.

"Yeah, why else would you be in an institution for the criminally insane?"

Mackenzie Miller was a regular teenager girl-- until she met her hot new teacher, Mr. Styles.

I got up and started putting my folder away, I assumed that our tutoring session was cancelled. I was about to say goodbye to Mr.Styles when he came up with a new idea.

"We can continue at my apartment- if you are okay with that. I would hate to bail out on you."

The day kept getting better and better. "That is fine, tell me your address and I will meet you there."

A few minutes later, I pulled into the parking lot of Mr. Styles' apartment complex. I parked my car next to my teacher's, which happened to be a very nice looking Range Rover.

I wonder what it would be like to make love to Mr. Styles in that car…