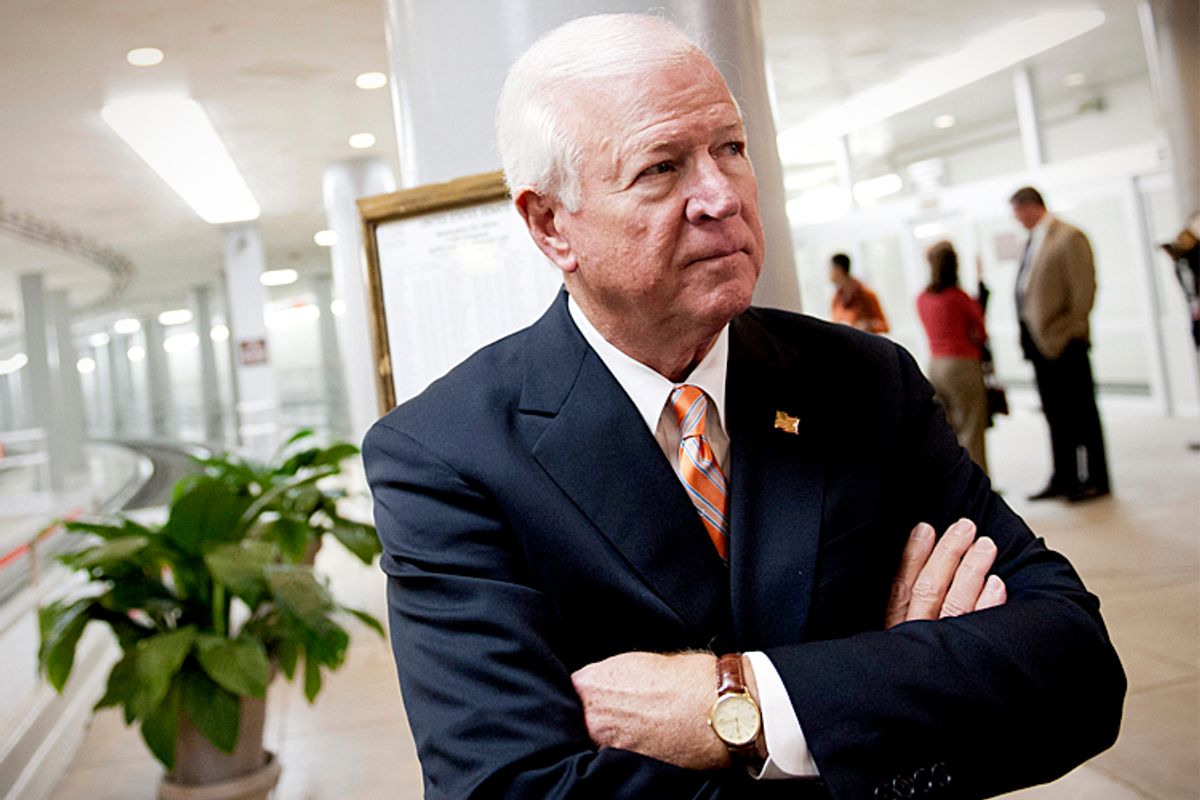 Note: This post originally said Sen. Chambliss did not attend the briefing, choosing to appear on Fox News instead. That's incorrect; Chambliss attended the briefing but left after asking questions during the time set aside for Q&A. The sentence has been corrected, and we apologize for the error.

While much of the conservative movement has decided to criticize the recent POW swap between the U.S. and the Taliban on the grounds that the U.S. soldier retrieved — Sgt. Bowe Bergdahl — is a no-good deserter/traitor/jihadist, some Republicans have wisely opted instead to criticize the administration on more substantive grounds, claiming it broke the law by striking the deal without sufficiently consulting Congress.

Georgia Sen. Saxby Chambliss, ranking member on the Select Committee on Intelligence, has been one of the administration's most vocal critics in this regard. Claiming he was promised he'd get prior notice before the deal went through, Chambliss recently said, "I don't believe a thing this president says now."

Yet on Wednesday, Chambliss decided to leave a White House briefing on the deal early, in order to appear on Fox News and criticize the administration for not being more forthright with information.

"In fact, the briefing is still going on, but I don't see how anybody can walk out of there with any kind of comfortable feeling that the administration from a notification standpoint -- and I emphasize that -- did what they should have done or what they had the opportunity to do," Chambliss said on Fox. "I mean, it was like they didn't trust [Sen. Dianne Feinstein, D-Calif.] and me. And, yet, the two of us knew about the bin Laden event for -- leading up to the takedown of bin Laden -- for months and months and months. And it's just very puzzling as to why they didn't notify anybody in Congress as to what was going on."

And it turns out Chambliss isn't the only Republican to complain about a lack of briefings about the Bergdahl deal while simultaneously skipping briefings about the Bergdahl deal. According to NBC's Chuck Todd, many senators left the White House briefing early. "So many of my NBC colleagues are tracking down senators who were at classified briefing last night and many are admitting they left early," Todd tweeted. "Amazing that so many senators from both parties didn't stay for the briefing until the end."

One senator who did attend, only to leave early? John McCain. According to reports, McCain left after asking a question, finding the White House's answer to be unacceptable, and then yelling. "I learned nothing," McCain told reporters after the fact.