One dead, 3 injured in school shooting at Seattle Pacific University

Reports say that police have the suspect in custody 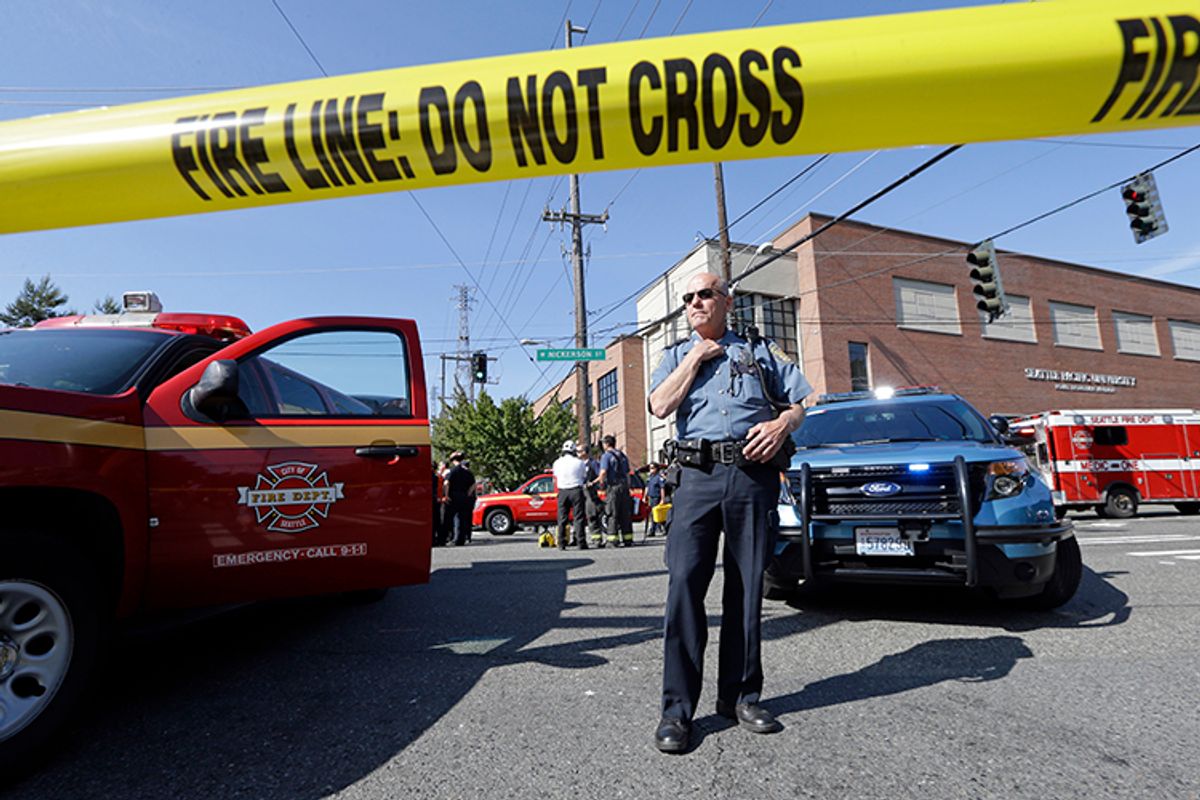 A police officer stands near the scene of a shooting on the campus of Seattle Pacific University Thursday, June 5, 2014, in Seattle. (AP/Elaine Thompson)
--

SEATTLE (AP) -- A Seattle hospital spokeswoman says one man in his 20s has died and a woman is critically injured after a shooting Thursday afternoon on the campus of Seattle Pacific University.

Two other people are less seriously hurt. Police say a suspect is in custody.

Harborview Medical Center spokeswoman Susan Gregg had no additional information on the young man who died. She says a 20-year-old woman is in surgery with critical injuries while a 24-year-old man and a 22-year-old man are in satisfactory condition.

Gregg says the hospital is not expecting any more injured people from the shooting.

It wasn't clear whether the suspected gunman was injured.

The university posted online that "the campus is in lockdown due to a shooting near Otto Miller Hall."

About 4,270 students attend the private Christian university, located in a residential neighborhood about 10 minutes from downtown Seattle.

Three people were shot Thursday afternoon on the campus of Seattle Pacific University and a suspect was in custody, police said.

The Seattle Fire Department said on its verified Twitter account that medics took four gunshot victims to Harborview Medical Center; a man and a woman had life threatening injuries, and two males were in stable condition. It wasn't clear whether the fourth person was the suspected gunman.

About 4,270 students attend the private Christian university, which was founded in 1891 by the Free Methodist Church of North America. Its 40-acre campus is in a residential neighborhood about 10 minutes from downtown Seattle.

The university posted online that "the campus is in lockdown due to a shooting near Otto Miller Hall." A woman who answered the phone at the school's security office quickly disconnected, saying no one could talk.

The incident follows a spate of recent shootings on or near college campuses.

Last month, according to police, Elliot Rodger killed six people and injured seven before turning his gun on himself in a rampage in Isla Vista, California, near two universities.

Seven people were killed and three injured when a 43-year-old former student opened fire at a tiny Christian school, Oikos University, in Oakland, California, in 2012. A gunman killed five people and injured 18 when he opened fire in a Northern Illinois University lecture hall in 2008.

In 2007, 32 people were fatally shot in a dorm and classroom at Virginia Tech in Blacksburg, Virginia before the gunman, Seung-Hui Cho, killed himself.