With so many tough, empowered princesses, Disney still struggles with how to market "Star Wars" to girls 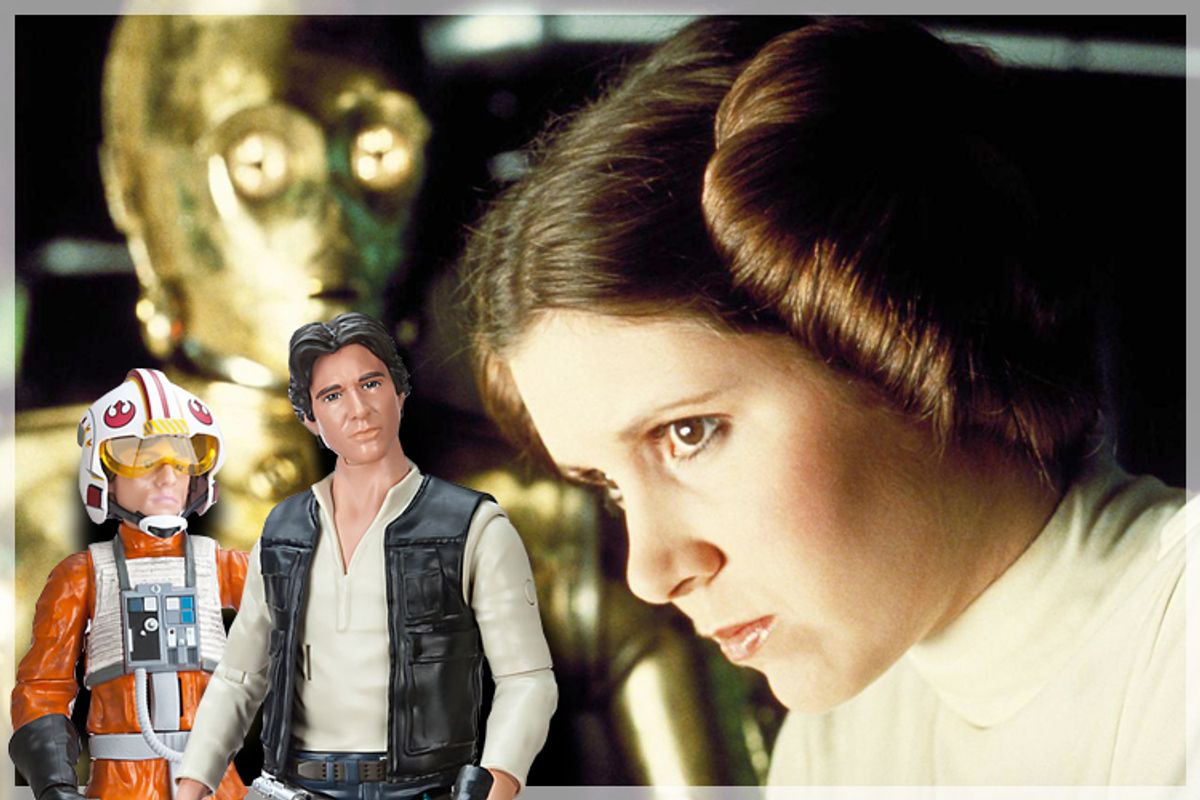 When Disney bought the Star Wars franchise in 2012, Star Wars fanatics like myself entertained the idea of brave, independent Leia as a Disney Princess. In my house, I taught my son and daughter the motto “Don’t Mess With the Princess” whenever we mention Leia. Finally, I thought, we’d have a non-pastel Disney Princess. An independent warrior!

But Disney doesn’t have any plans to make a Princess Leia doll. When film scholar Natalie Wreyford recently tweeted at the Disney Store, asking why its online store doesn't sell Princess Leia action figures, Disney responded: "Currently there are no plans for Leia at the Disney Store." Say what? As Indiewire pointed out, how could Disney not represent Princess Leia? Clearly Disney knows the importance of the character, writes Indiewire’s Inkoo Kang: “How else to explain the fact that everyone's favorite bunhead is one of only three characters, along with other fan favorites Han Solo and R2-D2, that serve as the Star Wars store's front-page images?” By the time I wrote this story, Disney had already replaced Princess Leia and Han Solo with Obi Wan Kenobi and Vader on their Star Wars homepage.

Search for “Princess Leia” on the Disney Store and not one single product with Leia’s face will appear except for the book “Vader’s Little Princess.” On the cover, our outspoken Princess is having a tea party with her father. Sure, the book is meant to be a joke, and that would be fine if there were other representations of Leia. She's the one female character in the series who fully defied gender stereotypes. Now she’s gone. She's even on a T-shirt.

I emailed at least four Disney Store media reps and didn’t hear back by the time I wrote this story. But if I had to guess, I'd assume that there are several forces at work here. First there’s the marketing piece. The Star Wars brand is the entertainment industry’s biggest licensor. According to Variety, “Last year, Disney dominated the entertainment category with 80 percent marketshare, generating $39.4 billion.” With the purchases of Marvel ("The Avengers," "Iron Man," "Captain America") and Lucasfilm ("Star Wars"), Disney now has “six of the top 10 franchises in the world.”

Now picture yourself in a mega-store like Target where pink and blue aisles mostly dictate what your kids buy. Disney Princesses (the number one franchise in the world, says Variety) dominates the pink aisle. Marvel and "Star Wars" dominate the blue aisle. Marketers do this because they know that by narrowing choices for children, they can sell more toys. This isn’t a concept limited to kids. One study found that parents also want to shop in the gender-correct aisle, and that parents were more likely than kids to buy toys according to their “masculine or feminine toy categories.”

So Disney’s conundrum in creating Princess Leia merchandise could be that Leia—who independently wise-cracks her way out of hairy situations with Wookies and Death Star garbage dumps—simply doesn’t fit. She doesn’t fit into the “boys” Star Wars aisle. She doesn’t fit in the Disney Princess aisle. That’s the beauty of her character—except, not to Disney.

This isn’t because Disney has a problem creating strong female characters; “Frozen” is an excellent example. But those female characters operate within certain parameters. They have girlfriends. Many have strong Daddy figures.  They can't be the one to save the hero (as Leia saved Han in “Return of the Jedi”). Even Merida, the powerful princess from “Brave” received an over-sexualized makeover last year when they took away her bow and arrow (one of Merida’s plot lines was that she was a clear shot), shrank her waist, fit her in an off-the-shoulder dress, made her less crazy-eyed and ran a curling iron through her unruly hair. (Leia received the same without Disney’s help when George Lucas turned her into Jabba the Hutt’s sex slave—though that’s not Disney appropriate either.)

Browse through the Disney Store page and narrow the search by gender. The only options are “men, women and boys.” (There’s one Star Wars T-shirt for women.) In hiding Princess Leia (and Ashoka Tano and Asajj Ventress and the most Princess-ified of them all, Padme Amidala) Disney has essentially said to kids: If you’re a girl who likes Star Wars, too bad.

Even more disheartening is that over the last generation, according to sociologist Elizabeth Sweet in a New York Times article about children’s toys, “gender segregation” of toys has reached record levels. “We’ve made great strides toward gender equity over the past 50 years, but the world of toys looks a lot more like 1952 than 2012,” Sweet wrote. This is most evident in the current incarnation of the Disney Store.

Perhaps I’m completely wrong and Disney is making-over Leia’s image as we speak. Maybe her next transformation will arrive in the form of white cargo pants and a pink, bedazzled lightsaber. That might be the only way Disney knows how to sell her.