As a new proposal gets traction, it raises a fact no charade can obscure: killing people is bloody business! 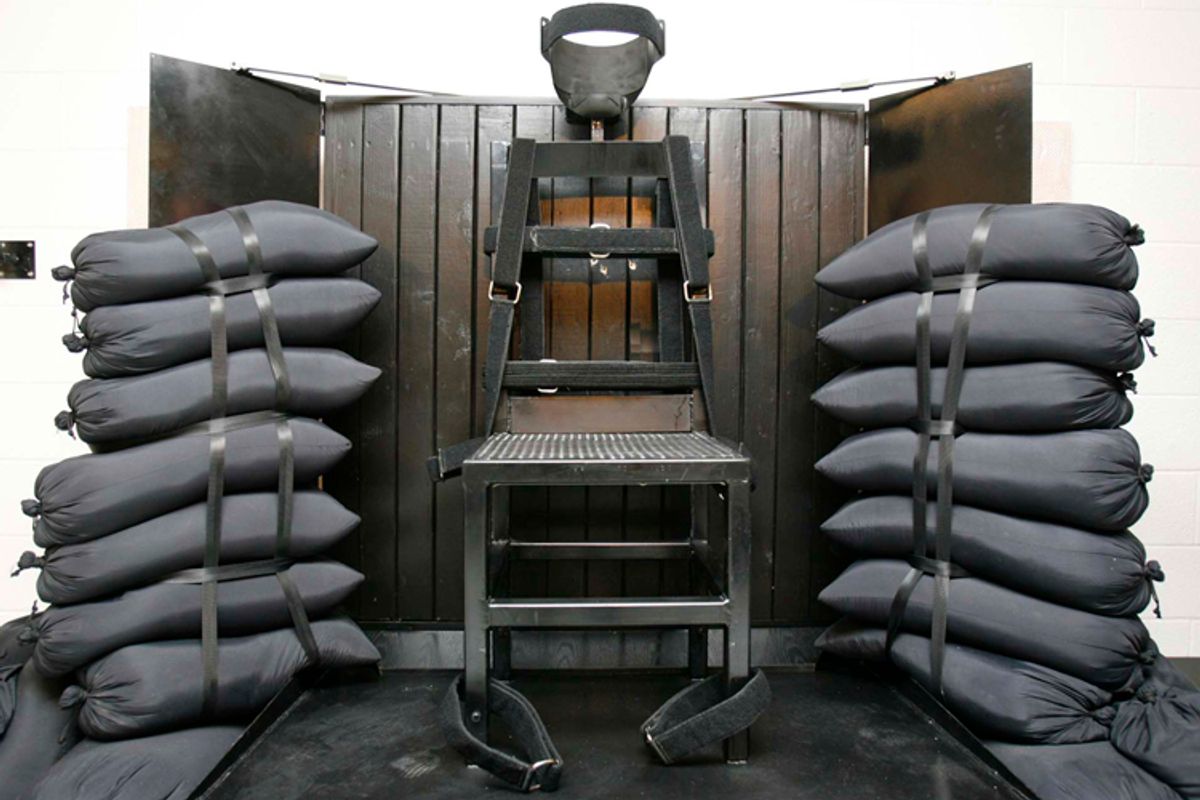 When Utah Republican congressman Paul Ray recently announced a proposal to bring back firing squads, it was a response to the infamous "botched" execution of Clayton Lockett in the state of Oklahoma. A few days later, the state of Tennessee approved the reinstatement of the electric chair in case it runs out of drugs for lethal injection (the drugs are made in Europe, where manufacturers refuse to sell them to anyone who would use them for that purpose).

Whether or not these alternatives get traction, they are important indicators of the political state of play in matters of capital punishment. Lockett’s 43-minute ordeal has already prompted the suspension of two other executions, and made lethal injection seem unsustainable.

Let’s backtrack to what might have been a historical turning point.

According to the official timeline, on the day of his execution Clayton Lockett struck a defiant note, refusing to submit to an X-ray until officers shot him with a stun gun (he also declined to see his lawyers, and turned down his last meal).

At 5:22 p.m., Lockett was restrained on the execution gurney. A phlebotomist proceeded to examine his body, searching for a suitable vein in which to inject the three drugs that were to put him to sleep, stop his breath and finally stop his heart. The examination took a long time, until the phlebotomist chose a vein in Lockett's groin area (doctors I consulted surmise this was actually the femoral artery).

At 6:23, Lockett received a dose of midazolam. After 10 minutes, appearing to be asleep, he was injected with vecuronium bromide and potassium chloride. But he woke up. He started thrashing and clenching his jaw. His mind and body fought death.

At 6:42, the execution team pulled the curtains closed, preventing witnesses from seeing anything else. It was later reported that “the vein had collapsed," with the result that the drugs had either been absorbed into the tissue, leaked out, or both.

At 6:56, the execution was suspended.

During those last 10 minutes, according to defense attorneys, "It's unclear if they were trying to revive him or give him more drugs to kill him.”

This “unclear” aspect, in fact, speaks volumes about current attitudes toward the death penalty. The existing protocol is designed as a medical procedure, and requires the participation of medically trained personnel (who must be willing to violate the Hippocratic Oath, and therefore must remain anonymous to avoid professional sanctions). While the stated objective is to kill with minimal pain, this is a highly dubious assumption: No one other than the condemned has experienced this kind of drug cocktail, and this is not the first time that things have gone horribly wrong. The procedure applied to Clayton Lockett is actually considered unfit to kill animals. If reducing pain was the point, then firing squads (or a single bullet to the back of the head) would indeed be more effective, reliable and cheap. But death by shooting would also be bloody and shocking. And that is a problem, because there’s a more important goal than minimizing pain, and that's minimizing drama -- visible body damage, and the visible agency of the executioners inflicting it.

This wasn’t always the case. Executions used to be spectacularly gruesome affairs; a high level of suffering was essential to manifest the power of the state and define the gravity of the crime. Maximum pain was reserved for the maximum offense, which was rebellion against the king. In 1660 Major-General Thomas Harrison, who had fought against Charles I, was given the sentence: "That you be led to the place from whence you came, and from thence be drawn upon a hurdle to the place of execution, and then you shall be hanged by the neck and, being alive, shall be cut down, and your privy members to be cut off, and your entrails be taken out of your body and, you living, the same to be burnt before your eyes, and your head to be cut off, your body to be divided into four quarters, and head and quarters to be disposed of at the pleasure of the King’s majesty.”

Eventually, the spread of liberal democracies and human rights discourse made this kind of display unseemly. The history of the death penalty in the Western world is the history of its withdrawal from the public square, and from the pedagogical exhibition of bloodshed. The gallows became death chambers; hanging and beheading were replaced by electrocution and poisoning with gas or chemicals; crowds became small groups of witnesses.

Today, we require our executions to appear as highly controlled, anemic affairs. We need them to be stage-managed with a kind of impersonal professionalism, by invisible technicians performing separate tasks, injecting drugs into tubes from behind a screen without looking into the eyes of the dying. We need the process to seem, paradoxically, uneventful, anticlimactic, a smooth transition from sleep to decease. We need to separate the mind of the condemned (to be made unconscious) from his body (to be paralyzed), so we can disable resistance, hide the will to live, make the scene abstract. This allows us to use words like "humane," and maintain the moral self-regard that comes with them.

It is so important that in order to procure the lethal drugs we are willing to circumvent international regulations and manufacturer restrictions, engaging in secretive trafficking with compound pharmacies and shady international brokers. The exact nature of these drugs, and the exact quantity available for a single execution, become a matter of secrecy, subterfuge and experiment — which leads, inevitably, to incidents like the Lockett execution. And this is where the absurdity of the whole exercise is exposed. Tasering a man, so he can be X-rayed to establish his fitness to be killed (and the absence of any tools with which he may do it himself). Putting on a 43-minute horror show in the attempt to make it look tidy. Getting stuck between insisting with the killing (hey, we’re halfway there!) and rescuing the man to try another day (we need more drugs!). Until the man solves the quandary by having a heart attack. Monty Python couldn’t have written this better as a satire.

Executioner’s guilt comes with the territory, and reflects larger social discomfort. Firing squads have a tradition of keeping one or more guns loaded with blanks, so every member has a chance not to fire a live round, and may cling to the hope he didn’t. Today’s approach has replaced fatalism with euphemism. The notion of "humane execution" is consistent with concepts like "smart bombs," "surgical strikes," "enhanced interrogation techniques." It’s a peculiarly cynical type of hypocrisy.

We define torture not in order to stay away from it, but in order to come as close as possible while still imagining that we're not torturers. We define "cruel and unusual" not in order to stake our ground at the opposite end, but to pretend that another form of killing is "humane" and usual. More than ever, the death penalty requires spin, denial, obfuscation. The essential truth of it must be shaded. The state must claim monopoly of violence while appearing nonviolent; the moment violence becomes visible, the curtain must be pulled.

Since Clayton Lockett’s death, I read several pieces by supporters of capital punishment. They all strived to refocus the conversation on Lockett’s crimes, arguing how unworthy he was of sympathy — arguing, in fact, that to feel any sympathy for him would be tantamount to disregard for his victims.

Let me address this very clearly: Lockett’s crimes included robbery, rape and murder, with one of his victims (a teenager) buried alive. You may believe that by committing these crimes he surrendered his right to live. But that isn’t the issue. The real argument against the death penalty is not about an offender's absolute right to live — it's about allowing ourselves not to kill. It's about dismantling a system that is unacceptably flawed — racially biased, ineffective, overly expensive and likely to result in the execution of innocents. Ultimately, one might conclude that the murderers — some murderers, anyway -- indeed deserve death. That doesn't mean we deserve to live in the shadow of a grotesque death machine.

The irony of Lockett’s execution is that a man so horribly guilty should be the one forcing us to stare truth in the face. The curtain that closed on his final minutes covered the horror but revealed the charade: Killing people is bloody business, and "humane execution" is an oxymoron. Will we now have the stomach to say “out with the doctors, in with the marksmen and the electricians?” Or could this be the final chapter in the shameful history of the death penalty in America?