After tumultuous years in the U.S. military, I couldn't snap back to a life that didn’t burn hot, bright and quick 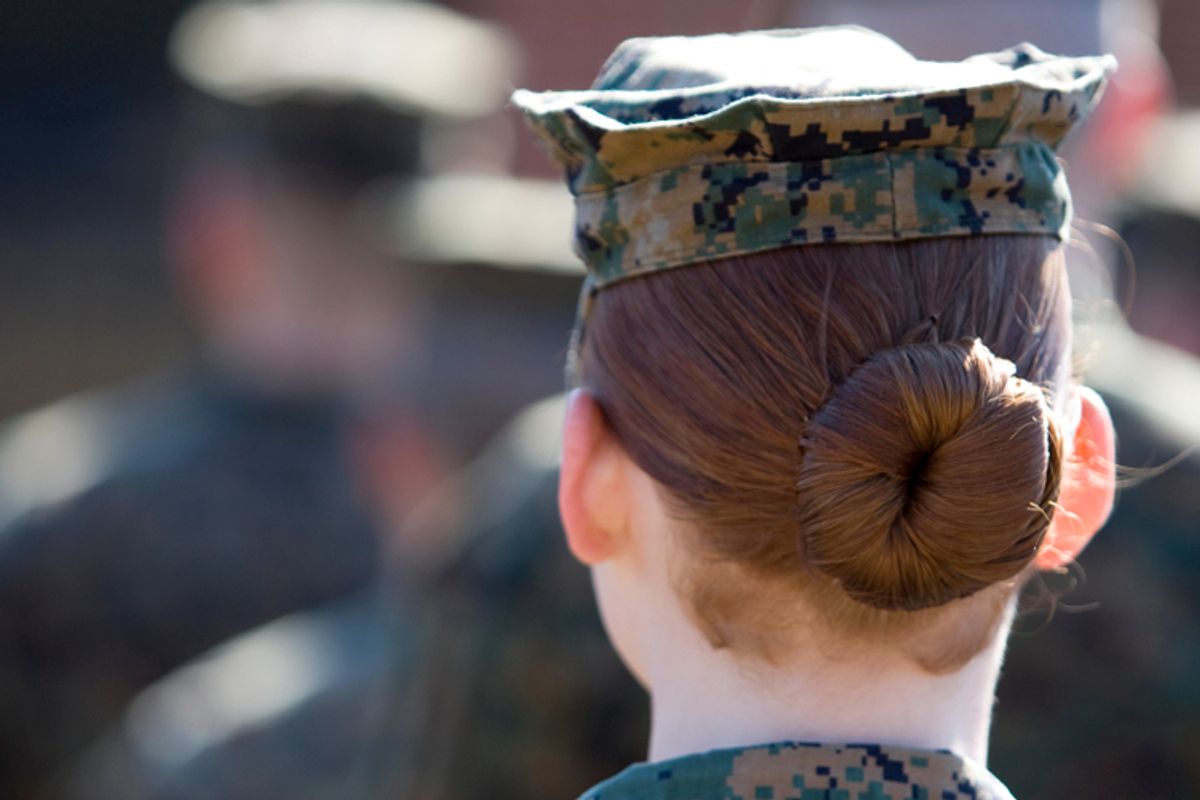 When we arrived in Germany in the winter of 2003, the bottom two floors of our barracks were empty, a ghost town. The infantrymen usually housed there were deployed to Afghanistan for some unknown number of months or years. Most nights, we third-floor dwellers trudged down one sticky flight of stairs to drink Jack, bake Tombstone pizzas and make out on dirty couches.

Months passed like this, drinking in the hollow spaces left by men more useful than us, braver. We girls grew hard and quiet behind the eyes. Many nights we were lonely until drunk. Then a hot body pressed against us, pressed us against a spackled hallway wall – all breath, hands and blood rushing under the skin. In the morning we were lonely again, and cold. A boy raped one of us on a blue couch. There were no witnesses; no one spoke up. She was sent quietly away to a small unit in the Black Forest.

In March, our unit traveled in Humvees to a forested range. We lay in the dirt and shot off M-16s. Sat to fire machine guns. Stood for the 22. We were allowed to look crumpled and dirty that week, the way I had always imagined soldiers should look. Soon enough, though, we returned to the office, the barracks, company headquarters. Our boots needed to shine, then. No stray threads. No misplaced crease. The ones in the desert, I thought, must not shine; and so it became something shameful that spring, to be so neatly dressed.

It was warm, barbecue weather, when the infantry soldiers came back. We had never seen such tired boys. They came storming out when they saw the mess we had made of their floor, but we offered them beer and hamburgers and, some of us, our wet mouths. All was well. These boys fucked hard and fought local Germans in the pubs. Sometimes after drinking all night, one of these muscled kids would have his clothes halfway off, and then he would cry and tell the girl to leave, or maybe he would hold her. But the crying was always short, and only when he was very drunk.

One of these boys was named Adam. His bones were fine and thin – not meant for fighting. He loved a girl named Hannah, who lived in Georgia and wore short cut-offs all year round. They grew up together, running around in the dirt and thick heat, drinking Pabst in a rat-infested trailer park. In the worn photo Adam carried in his wallet, Hannah is wearing a small tank top, her blonde hair in a messy bun. She looks scared and full of something like fury, something like light. Maybe she is the kind of girl who could understand a war like this one – a violence that folds into the humdrum, daily life of a country.

One day, Adam told me his unit was being deployed to Iraq again. We went out drinking that night – a heavy-metal club on the forested outskirts of town. After a couple beers and three shots of Jager, he kissed me and then slammed his fist into a wall. We went outside, and under the pale street lamps, we could make out that his knuckles were bleeding. His speech began to slur as he told me about how he had tried to become a conscientious objector earlier in the month, how the unit rejected his request, how they said he would have to object to war in principle -- meaning all wars, not just this one. He teetered in the gravel parking lot, a lost boy. A few weeks later, his unit disappeared from the second floor. I never saw Adam again; although sometimes I imagine a pale photograph of Hannah fluttering over that far expanse of sand and burning rubber.

After an honorable discharge in November 2005, I moved to Seattle to study political science. That first rainy night on campus, I wandered through a beautifully landscaped corridor of fountains, grassy lawns and tall buildings constructed to guard and illuminate the whole human effort at making meaning out of the mess. In the dark, I kissed a pillar of Suzzallo Library. A promise of understanding, a hope.

But soon I discovered that some part of me had been stretched too far and would not snap back to a life that didn’t burn hot, bright and quick. Flower’s Bar and Restaurant was a half-mile from the house I roomed in, and I quickly developed a habit of spending most nights drinking away my VA benefits with deep glasses of Syrah and Pinot Noir. Other students were friendly enough, but I felt far removed from a world that revolved around internships, grades and fashion. I read Plato with un-cool urgency, as though something lit me from behind, as though my own world were crumbling. Or as though that ancient, luminous language might, if not stop the collapse, at least help me to see it clearly. And it did help. And it didn’t. My roommate began to complain that I came home in the middle of the night, belligerent and smelling like booze. One night, I crumpled into bed, vomited into my pillow, rolled onto the floor and seized in the dark. The next morning, I lay on the floor as my roommate carefully stepped around my body and dressed in the semi-dark, escaping the sour smell of puke.

Eventually, I had to quit school and move back to my parents’ house in Oregon. I fell, sometimes quickly, sometimes slowly into a state of pure self-abnegation. Something dark and feral ate at the corners of my life -- a blight, a curse. Speaking later with other veterans, I learned that this experience was far from rare. There are those, too, who make it in the real world. They teach, program computers, attend fancy schools – but even most of the successes will say, after drinks or a long silence, that some nights they want to run for the hills and scream until their throats are dry, whispering husks. There’s a kind of sacrifice a person can’t just stop making.

I started writing poems in the Army but didn’t know it until years later. When I was getting sober and moved out of my parents’ place, I discovered a journal full of notes from my days in Germany: Pleas to quit drinking, portraits of European cities and of dirty barracks life, the little Puerto-Rican guy who lost his best friend to an IED, descriptions of photos soldiers brought home with them – grisly, inhuman stuff, a picture of a charred arm lying outside a mortar hole.

These days I still write, still struggle to make sense of what happened to us out there in Germany, Iraq, back home – all these raging drunks, kids who sold their best years and now piss themselves at night. I write to interrogate, to discover the thread of meaning that might sew together these ragged fragments. I am no longer a solider, never will be again, I hope. Though far from combat boots and dog tags, I still find myself toiling over something like fear, adrenaline, a desire to quick-drop into inky oblivion. Everyone’s fighting a war, Saint Augustine said – whether with guns, heroin or prayer – and so there must be an endless need for clear sight, courage, poetry.