I learned to never ask for help

My violent father taught me strength was independence. When I broke my ankle, I had to break old habits, too 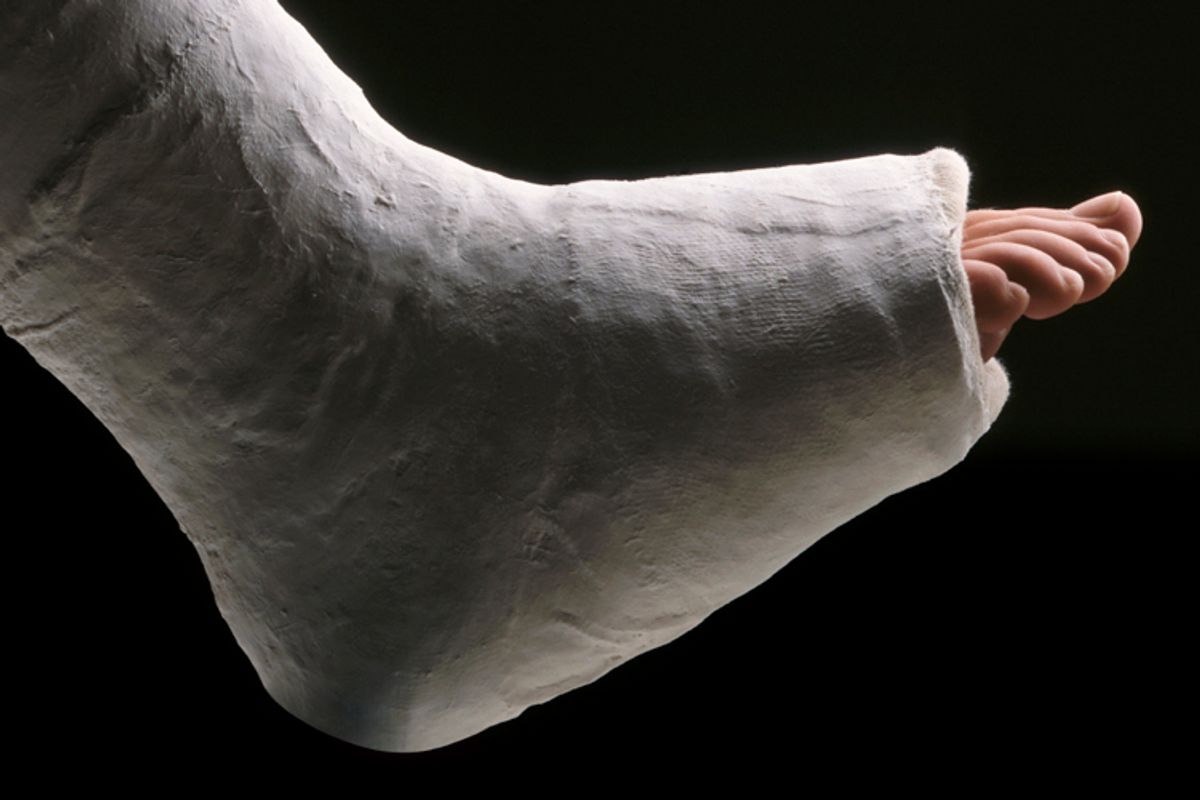 The sound of a bone breaking is surprisingly slight; it’s a quick snap, like a twig under a boot heel. But it traveled up from my right ankle with the force of a sonic boom, and it would echo in my dreams weeks after I took that first step out onto the black ice that sheathed the parking lot outside my complex. My fall seemed as slow as distant thunder, and as quick as a lightning flash right outside a window.

My right ankle, broken.  My left ankle, a category three sprain, a mess of screaming ligaments. I’d end up in the E.R., and then in the office of an orthopedic specialist for three consults over the course of six weeks; six weeks in which I was to remain “non-weight bearing” on my right foot and weight bearing (as barely) tolerated on my left. I’d require rigorous in-home physical therapy before I could use a walker to hurl myself short distances, like some doomed animal with its paw in the teeth of a trap.

Whenever I tell anyone what happened, they always say, “That sound must’ve been the worst part.” They speak with voices half-hushed in an odd reverence — as if the magnitude of my injuries merits the awe afforded to natural disasters and the charred matchsticks of houses they leave in their wakes.

That sound, that everlasting snap haunts me, but it’s not the worst part. The worst part was that first moment after my body hit the ice and before the shock set in: the realizations that I’d just lost the independence that armored me against the world and made me feel strong. And if I wasn’t strong, I needed other people. And if I needed other people, I was nothing — just a scaffold, weakened and stripped by a gale-force wind, ready to splinter with the slightest breeze.

Strong became synonymous with impenetrable when I was still losing my baby teeth. My father prized a kind of can-do stoicism straight out of Clint Eastwood’s greatest hits. There were no tears, only whiskey. No room for fear, for any feeling, really, other than an obliterating anger. He taught me, through his absences — nights passed out on the sofa; weeks when the slightest infraction (a spilled water glass, a yawn that offended him with its timing) provoked an arctic withdrawal, where he wouldn’t so much as look at me — that needing anyone, for anything, was like being a trapeze artist who, mid-leap, reaches out toward an empty swing. He taught me, through his attention — eruptions of fists and hushed apologies — that love, like pain, was something to be endured. And crying always makes it worse.

My mother lived inside the orbit of her own dependence. She needed him to carry her up every level of Maslow’s hierarchy: to pay the bills, to keep her fed and housed; to be that handsome man with the leather briefcase, to make her the envy of her friends. I saw her helplessness as an unpardonable sin, so self-reliance became my defining virtue.

As an adult, I did everything I could to live alone. I took basement apartments in bad neighborhoods and lived off dollar meals and Ramen. When I broke my wrist in a car accident seven years ago, I eschewed the pain meds, piloted my rental car and brought in the groceries one-handed; went to work and grad school as if (to quote Don Draper) it never happened. I took pride in refusing any offers of help — not because they came with strings attached, and not even because I wanted to impress anyone else; because refusing those offers meant I was self-contained, strong enough to endure a world where oblivious people plow their SUVs through stop signs, where little girls are hit harder for crying.

“Nope, just me” was my anthem, not a single woman’s lament.  I found a Spartan sanctity in hauling 50-pound bags of dog food over my shoulders, and in shouldering the bills on my own. My value wasn’t innate; it was earned by being useful, and not just useful — but stoic, heroic in shucking off my needs until I honestly believed I didn’t have them. I was always the one you call whenever you need to collect your stuff from your ex, to bitch about your boss, or just cry.

Losing, quite literally, the power to stand on my own two feet felt more devastating than any beating. I needed help with the bedpan; I needed a washcloth rubbed over my back, and I needed the pain pills that swaddled me in a gauzy numbness. I wish I could say that there was one clear catharsis that cracked me open, but I didn’t have some capital-E epiphany — that redefining strength meant silencing the static of my upbringing.

The change came in a series of moments that were as small and steady as the mechanics of a single step forward: my “work wife” sends me a “Hey Girl” get well card she’s Photoshopped with my favorite picture of Ryan Gosling, brings me lunch one lonely Saturday; a friend who attends the AWP conference in Seattle sends me a care package full of literary journals, postcards and chocolate. The physical therapist who comes to the house twice a week sinks her fingers into the most tender parts of my sprain and tells me how sorry she is that it hurts so much; and one day, a necklace arrives, a tiny wooden pendant with the words “girl on fire” etched in the center.

There is nothing I can do to return the gifts, the late-night “thinking of you” texts, the hours spent walking my dog for me, and the repeated assurances that I was “tough as hell” for following my doctor’s orders, just sitting and waiting for my bones to do their silent work of knitting whole again. I never brought myself to ask for these assurances with words, but the edge in my tone when I joked that it took a catastrophic injury for me to finally catch up on my Netflix queue must’ve betrayed my need for them.

I’m tempted to say that this let me take off my armor, but the image of impenetrable metal being lifted off of me in clean, easy pieces isn’t quite right. My armor was so old, so weathered, that it had rusted over, calcified until it had become a second skin. I did not take it off, so much as scrape it away with every phone call I took, with every time I kissed my dog on her nose and sent her out with an “auntie” or “uncle,” with every time I let one of those “aunties” and “uncles” bring me groceries and cook me a meal.

Bearing the weight of that armor required a constant vigilance. Suddenly free of its heft, its heat, I had nothing to do but focus my energies on healing, and healing meant feeling, and not just anger. I grieved the woman who ended relationships before they began, because she didn’t want to “get in the habit” of trusting a man to care for her, let alone asking him for anything. I grieved the teenage girl who cleaned her friends’ mothers’ kitchens as thank you for allowing another school night sleepover. I grieved the little girl who’d learned that nobody would ever help her when she got hit. I stood (as best I could) on my sprained ankle, head bent in the kitchen sink to wash my hair, and I wept — not just from the pain itself, but from the gnashing fear that I would never get better, would never stop hurting.

The cast would come off at the end of those six weeks, and the mottled, swollen flesh of my sprained ankle would fade along the usual kaleidoscope of a bruise. Walking back into my old life would not be as simple as putting one foot in front of the other. Both ankles were weak, my doctor said, and if I didn’t take it easy and ask for help, I’d “increase the odds for reinjury.” Those five words weren’t just the hammer strikes sealing the coffin closed; they were the thuds of dirt tossed on the lid. I would need outpatient physical therapy three times a week for several months.

I wobble on balance boards and grit my teeth at the sickly snap, crackle, pop of joints massaged and manipulated for greater range-of-motion, but I’m not strong enough to keep my hold on the leash once my dog saw a rabbit, or to cart in bags of groceries (let alone laundry) while mounting the stairs to my apartment. On doctor’s orders, I ask my friend’s son-in-law to install a handicap bar in my shower: a cold reminder that I can’t stand up without leaning on something far sturdier than I am.

I tell myself that I’ve managed the ins-and-outs of the day-to-day with my father’s college ring indented on my skin, with a throbbing wrist and a hand too sore to make a fist. “This never happened” snakes into my mind, rattles its tail at my pride. Then I try to lower myself into the bath without holding onto the bar; my ankles start to buckle and sway until I grab on for support. And I know that “this never happened” will make sure it happens again.

Strength became asking, “would you mind?” Strength became “I need.” Strength meant knowing that my friends said “not at all” and “of course” not out of obligation or even pity. They said yes out of love, the kind of love my parents couldn’t give me: a hand that reaches out, mid-swing, and catches me before I fall.