"Cosmos" may be finishing soon, but these truths are written in the stars -- whether Ken Ham likes it or not 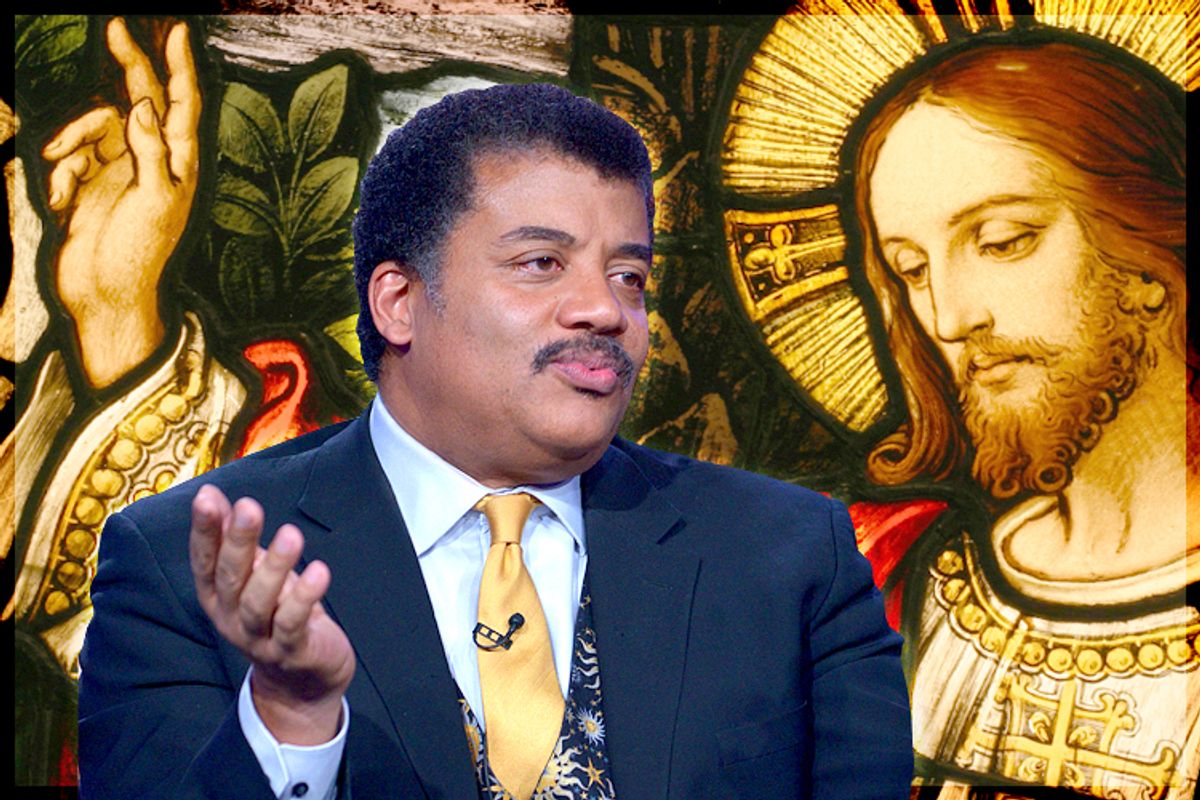 Tonight marks the grand finale of "Cosmos: A Spacetime Odyssey." Though we're sad to see the series go, it can be surmised that some may not miss the weekly dose of thoughtful science: Young Earth creationists. The Ken Ham-helmed organization Answers in Genesis has responded week after week with blog posts attempting to explain away Neil deGrasse Tyson with a tedious Bible-based refrain.

Though it is not part of his science-rooted belief system, Tyson, for his part, has said that there are plenty of "fully functioning" scientists who believe in God. The issue is treating the Bible as a scientific text, which is what Young Earth creationists do.

“None of that [the Bible] is consistent with any scientifically derived information about the world,” Tyson said. “So enlightened religious people know this, and don’t try to use the Bible as a textbook, using a Western example.”

Here are some major moments that made creationists fume.

1) On the age of the universe

If you're a Young Earth creationist, you believe that the world was created by God somewhere between 6,000 and 7,000 years ago. But in the fourth episode, "A Sky Full of Ghosts," Tyson explains why scientists know for a fact that the universe is much, much older.

“But if the universe were only 6,500 years old, how could we see the light of anything more distant than the Crab Nebula? We couldn’t. There wouldn’t have been enough time for the light to get to Earth from anywhere farther away than 6,500 light years in any direction. That’s just enough time for light to travel a tiny portion of our Milky Way Galaxy. To believe in a universe as young as six or seven thousand years old is to extinguish the light from most of the galaxy not to mention the light from all the 100 billion other galaxies in the observable universe."

Naturally this set off a firestorm of pseudo-science from Ken Ham's Young Earth creationist group, Answers in Genesis.

In "The Clean Room," Episode 7 of the series, Neil deGrasse Tyson starts with a query: How old is the Earth?

Many scientists have pondered this question over the years. One of the earliest was Irish Archbishop James Ussher, who published several works in the mid-1600s known collectively as "Chronology," in which he calculated the age of the Earth based on clues supposedly hidden in the Bible.

Tyson doesn't blame Ussher for using the Bible, as it was the predominant text at the time. He does, however, point out that a much more accurate "book" is now readily available to scientists -- one written in the Earth's rocks and sediment. Observing the layers of the planet's crust, scientists can measure with increasingly remarkable accuracy the actual age of the Earth. One such scientist whom Tyson introduces to viewers is Caltech researcher Clair Patterson. Through a tedious process, depicted in the video below, Patterson determined that the Earth was 4.5 billion years old. Once again, creationists responded none too kindly to such a suggestion.

3) On the origins of Christmas

Also in the seventh episode, Tyson dives into an explanation of why Christmas occurs in December: The Christian holy day was appropriated from the ancient Roman holiday of Saturnalia, in an effort to convert more pagans to Christianity. Some folks, like Jay Richards at the Discovery Institute, were not very happy with this answer.

Evolution was, of course, discussed many times in "Cosmos." In the ninth episode, "The Lost Worlds of Planet Earth," for example, Tyson points out how climate change influenced the rise of mammals — and eventually humans. This scientific observation, established through years of research, blows the entire "man created by god out of dust" section of Genesis out of the water.

To tie the evolutionary version of earth’s history to human history, Tyson stitches the climate change that could have occurred if the slow-and-gradual view of earth’s history were actually true to a relative deforestation in Africa, driving primates from the trees to dash on their hind legs across the savannahs scooping up food, sticks and stones for weapons, and tools and of course evolving the intellect to graduate to being human. As we’ve discussed many times — most recently in our review of "Your Inner Monkey" — there is nothing in experimental biology to support this claim.

In the second to last episode of "Cosmos," Tyson tackles one of the most pressing issues of our age: climate change. He lays out the catastrophic consequences of unchecked global warming, and even gives step-by-step rebuttals to skeptics. Still, creationists unsurprisingly thought this was a bunch of hooey.

"Dr. Tyson paints a dire picture of our future, parading the planet Venus as the poster-child for a runaway greenhouse effect. At the end of the program, he offers 'a breathtaking vision of the magnificent future that is scientifically and technically within our grasp, if we will only awaken and seize it.' Concerned, conscientious people might then ask, 'Why take a chance? If there is even a possibility we are hurting our planet, shouldn’t we change our way of life just in case?' The answer is 'no.'"

No matter that 97 percent of climate scientists agree on this issue!

Watch the episode below:

This last spot on the list may seem like a cop-out, but it would be hard to find an episode that the creationist community didn't lose their minds about. Some folks even went so far as to demand equal airtime on the program to present their intelligent-design "science." The thought that "Cosmos" might someday be shown in schools was simply too much to bear.