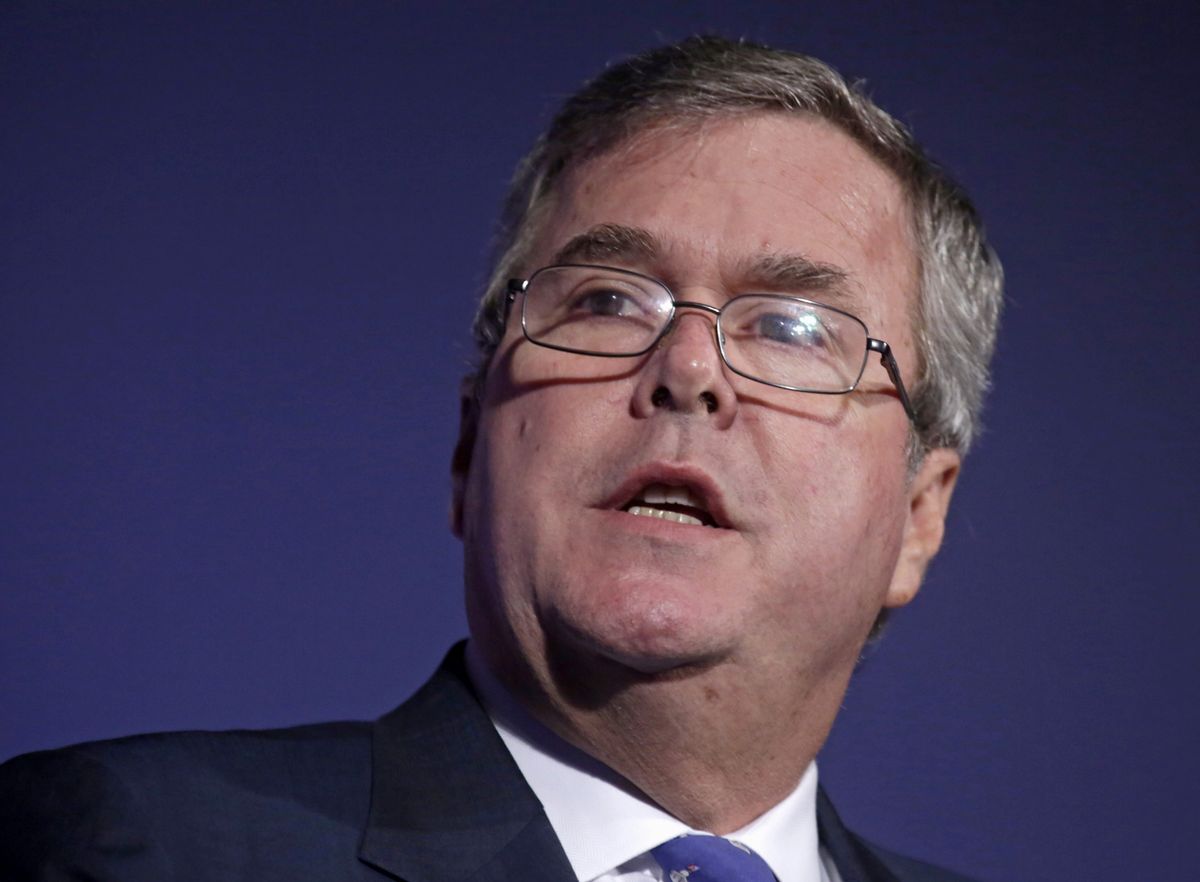 FILE - In this Aug. 9, 2013 file photo, former Florida Gov. Jeb Bush speaks in Chicago. For almost a year, The Associated Press has been tracking movements and machinations of more than a dozen prospective presidential candidates. Bush's standard disclaimer, "I can honestly tell you that I don't know what I'm going to do." He says hell decide by end of year whether to run. One factor in his decision: Whether he can run an optimistic campaign and avoid the mud fight of politics. (AP Photo/M. Spencer Green, File) (AP)
--

A look at preparations by former Gov. Jeb Bush, R-Fla., for a potential 2016 presidential campaign:

Nondenial denial: "I can honestly tell you that I don't know what I'm going to do," is his standard disclaimer. Says he'll decide by end of year whether to run. One factor in decision: whether he can run an optimistic campaign and avoid "mud fight" of politics.

Iowa visits: Hosted fundraiser in Florida for Iowa Gov. Terry Branstad in May. Visited Iowa in 2012 for economic development meeting but has been holding off on splashy visits to early voting states.

Foreign travel: Yes, a few times a year. Several visits to Israel, as governor in 1999 and as private citizen in 2007. Also went there as Florida commerce secretary in 1980s.

Meet the money: Yes, addressed well-heeled crowd at Manhattan Institute, led by GOP benefactor Paul Singer, in May. Flew to Las Vegas in March to meet GOP super donor Sheldon Adelson and address senior members of Republican Jewish Coalition at Adelson's company airport hangar. In February, his short video for a GOP fundraiser at Donald Trump's Palm Beach, Florida, estate was a bigger hit than Sen. Ted Cruz's keynote speech. Party in summer of 2013 for his immigration book at home of Woody Johnson, owner of the New York Jets and a leading Republican bundler.

Hog the TV: No. Blanketed the Sunday talk shows in March 2013 to plug his book on immigration, but not many appearances since.

Take a stand: Unapologetic proponent of Common Core education standards, which he again promoted at a conference in Arizona in the spring, and immigration changes opposed by many in GOP.

Baggage: The Bush factor. Jeb is yet another Bush, which is a plus for many people but a negative for a big slice of the electorate that either didn't like Bush 41 and/or 43, or simply objects to the whole idea of a political dynasty. "It's an issue for sure," he acknowledges. Courting trouble with the right with positions on education and remarks in April that people who cross into the U.S. illegally are doing so as an "act of love" for their families.

Shadow campaign: He's a Bush — he's got tons of connections. Sally Bradshaw, his chief of staff when he was governor, is his go-to political person.

Social media: Tweets and posts many Wall Street Journal stories, education thoughts and some Bush family doings. Tweeted in November 2013: "Why would our President close our Embassy to the Vatican? Hopefully, it is not retribution for Catholic organizations opposing Obamacare." Fact-checkers pointed out the U.S. Embassy in Rome was relocating, not closing.