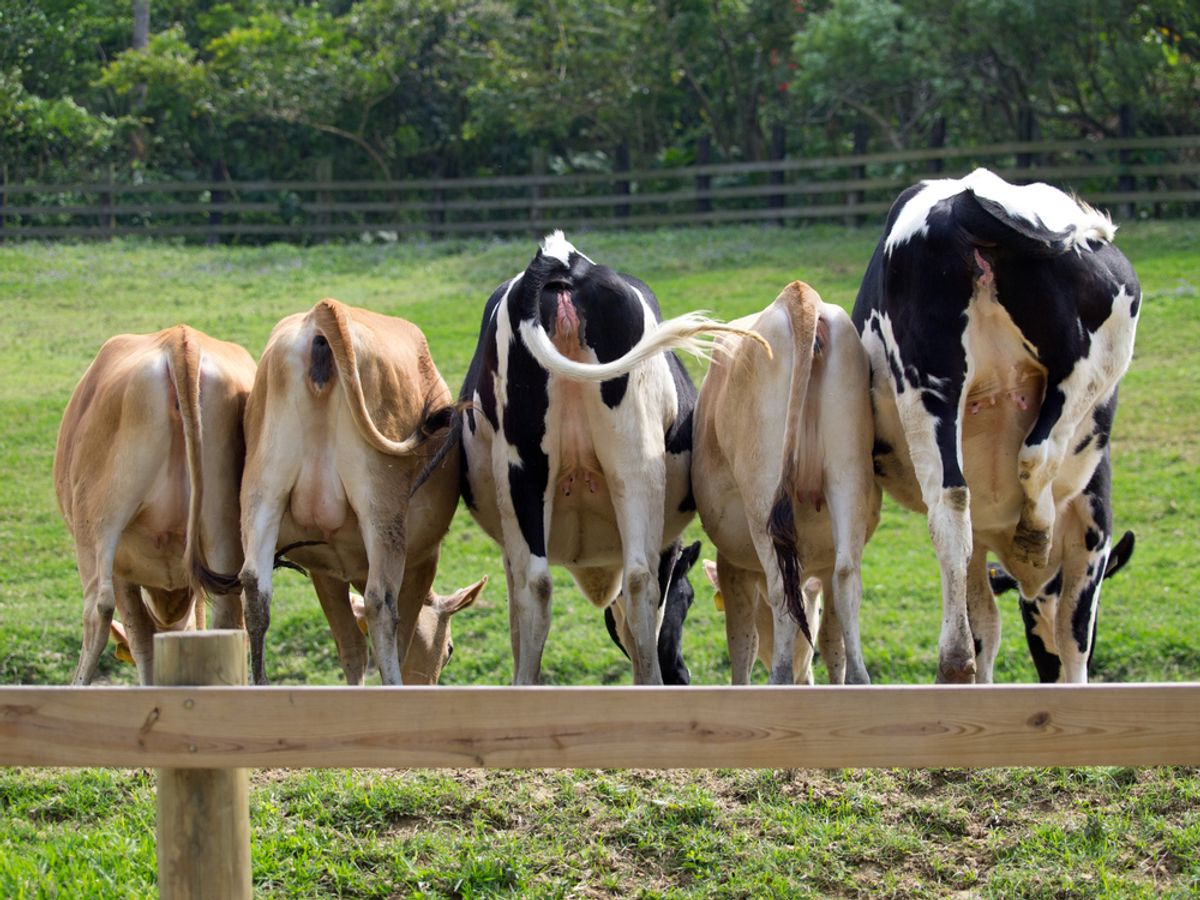 While most of the world's attention is focused on the push to reduce fossil fuels' contribution to climate change, Newsweek reports, an international team of scientists has focused its efforts on a different source of greenhouse gases: cows. More specifically, the methane-laden burps and farts that, combined with the "emissions" of other ruminants, contribute an estimated 4 percent of the world's total greenhouse gas emissions. Here's the pitch:

Ruminants all have lots of microscopic organisms living in their digestive tract that help them digest cellulose—a component of the cell wall of green plants. It’s a huge boon for these animals, giving them the ability to get energy from pretty much any plant that grows on Earth. Cows can’t digest grass without these microorganisms. The catch is that when the organisms digest the cellulose, they create carbon dioxide and methane gas, which the host animal has to get rid of. All ruminants excrete methane, but cows are by far the most prolific emitters.

...Enter DSM, a former state coal mining company that has undergone an unlikely evolution into a global material and life-sciences conglomerate with operations on five continents and annual revenues of 9.1 billion euros ($12.43 billion). The company directly employs a number of scientists who work alongside DSM-funded academic researchers such as [Karen]mBeauchemin to solve the cow dilemma. And they think they’ve done it.

The team now has a powder that cows can eat with their daily feed. “It interferes with the animal’s biological mechanisms,” Beauchemin says. “That stops the microorganisms in the animal’s stomach from doing what they’re doing.”

“In trials we’ve managed to reduce methane emissions by up to 60 percent,” says Petra Simic, a biochemist who directs DSM’s cow-methane efforts. “We have solid proof of concept that our compound does what it’s supposed to do. What we’re working on now is figuring out the best way of mixing it into the cow’s feed.”

Their product, which they're cheekily calling "Clean Cow", still has a number of hurdles to pass: the scientists need to prove that it's 100 percent safe; after that, they'd need to convince label-conscious consumers to go along with the idea. And as a solution, even a promising one, it's imperfect -- plenty will argue that the innovation is still a lot more complicated than just reducing our meat and dairy consumption would be:

[Carlos Gonzalez] Fischer, the biologist and animal activist, worries that clean cow dreams will lull us into a false sense of security: “The danger is that we’ll see ‘clean cows’ as a license to produce even more beef and dairy.” And the risk is that it won’t stop there. For Clean Cow, vaccines or any other flatulence-fixing product to help us minimize climate change, it has to supplement other CO2 cuts, not be used as an alternative. But Clean Cow may make us feel so virtuous that we use it as absolution for an annual holiday flight, or two or three. And for CO2-spouting daily drives to the supermarket to buy clean milk.