"Game of Thrones": "The Watchers on the Wall" was no "Blackwater" 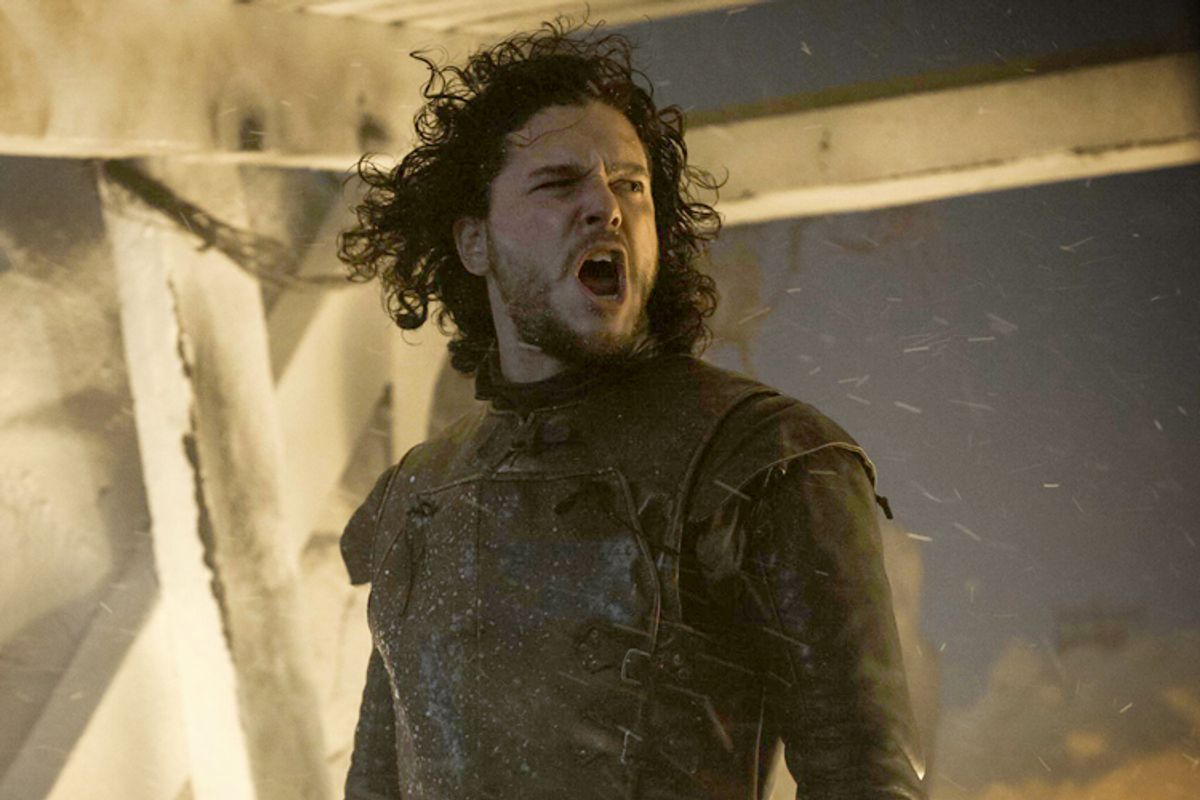 "Game of Thrones" tends to deliver its biggest action or most climactic plot developments in the penultimate episode of each season: Ned Stark's execution, the Battle of the Blackwater, and the so-called "Red Wedding" filled those spots in the first three seasons.

Last night's episode, "The Watchers on the Wall," was a clear attempt to deliver a similar jolt before the threads of the season are tied up as best they can be next week. However, the show may simply have grown too diffuse to allow for an episode that focuses on one climactic event -- particularly this one.

The episode spent its entire running time at the Wall, where Jon Snow undertook his most massive onslaught yet from an army that included mammoths and giants -- as well as Snow's wilding love Ygritte. The episode was as visually dazzling as it was oppressive -- there was no relief, it seemed, from the story of the onslaught at the Wall.

But calling this episode a "story" is a little generous, as it's a discrete event that hasn't worked its way into the bloodstream of the show yet. The Battle of the Blackwater in season 2 -- another event that overtook an entire episode -- had immediate ramifications for a large swath of characters across the show, and those characters, from Sansa to Tyrion, each got moments over the course of the episode. We saw how they were reacting to the uncertainty of the battle and what could have been a massive shift in power over Westeros.

In "The Watchers on the Wall," by contrast, we see no characters who aren't at the wall -- what would even be the point? None of the other characters, at King's Landing or elsewhere, even know this is happening. That means the only major (sorry, Sam fans) character in this episode is Jon Snow, who's been disconnected from the rest of the show's characters for seasons now.

These complaints get to the very heart of what, in fact, makes "Game of Thrones" itself in its fourth season; the ensemble cast is so widely dispersed that it's impossible to have a single story that immediately affects many other characters, at this point. The "Purple Wedding" gathered together a panoply of characters, but they soon scattered; more and more does the show seem like it's building towards something cataclysmic.

But it isn't there yet. And "The Watchers on the Wall" was a misstep for its presumption that spectacle, alone, was what had made its three antecedent ninth episodes of the season work. What worked, there, had been the sense that the show had radically changed the story in an unexpected manner. Alterations in Jon's love life (with the death of Ygritte) and duties at the Wall (having been emboldened to command) are not game-changing. What this episode badly needed, both as respite from the endlessness of the clanging, violent battle, was a cutaway to Sansa or to Daenerys, another of the show's characters who are now on their own tangents. If "Game of Thrones" is going to keep all of its plotlines in the air, its creators should keep in mind how uninteresting a hero Jon Snow is, and how little this battle, the subject of a full hour of airtime, means in the short-term for characters on their own compelling adventures.