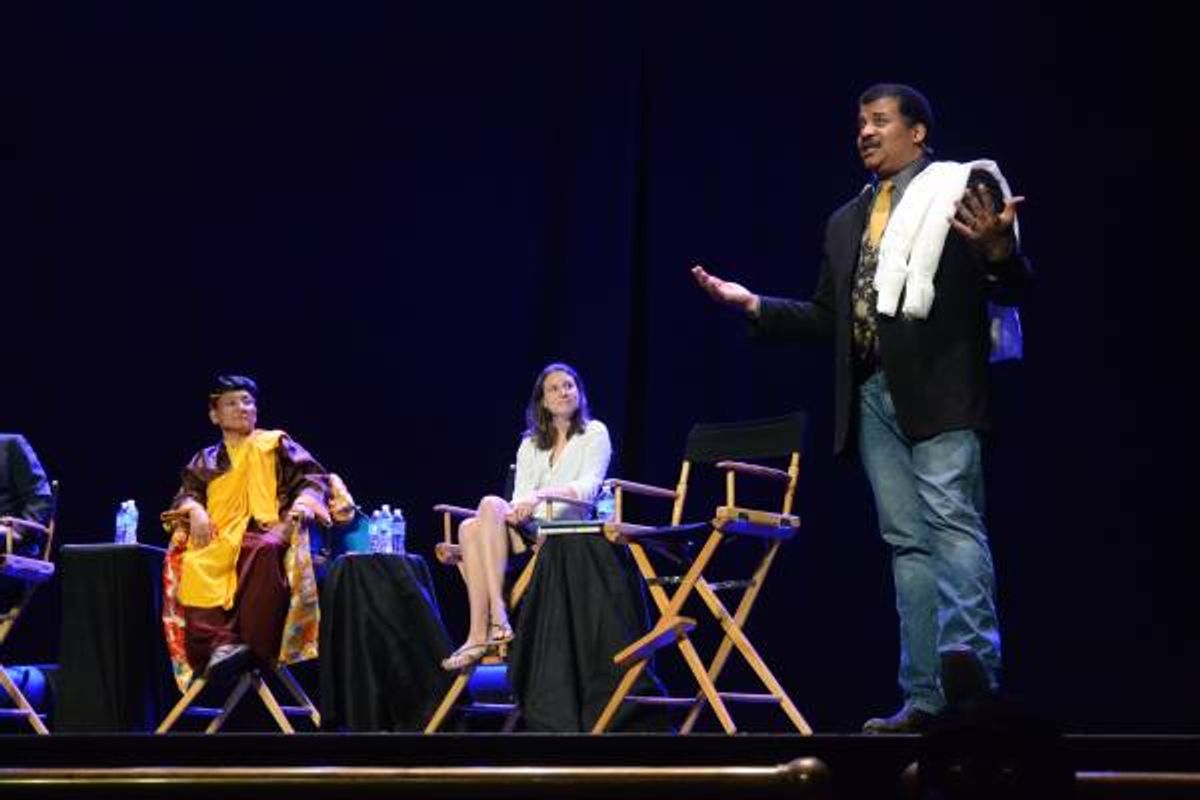 On the eve of the finale of his hit series, "Cosmos," and at the peak of cultural and political stardom, Neil deGrasse Tyson appeared before a live audience at New York City’s Beacon Theatre to record a World Water Week-themed episode of his radio show, "StarTalk." He apologized to the nearly 3,000 in attendance for being 20 minutes late. He had come straight from filming a segment for "The Tonight Show" with Jimmy Fallon, he explained.

Unlike "Cosmos," where Tyson takes the leading role, Thursday night's event aimed to bring a variety of voices to the conversation. Tyson assembled his guests like the setup to a joke: Joining him onstage were a hydrogeologist, a Buddhist leader, a Kennedy and -- just in case you weren’t laughing -- two comedians. The geologist, Tess Russo, was there to provide scientific background for the topics being discussed, brought in when needed to consult on issues ranging from why the ocean is salty to how aquifers work. Robert F. Kennedy Jr. and his Holiness the Gyalwang Drukpa were both there to discuss their clean-water advocacy. (Kennedy, on his work as an environmental lawyer and as the president of Waterkeeper Alliance; his Holiness on his role as "guardian" of the Himalaya's rivers, a source of water on which about half the world depends.) Stand-up comedian Eugene Mirman and, as his surprise guest, former "SNL" cast member Jason Sudeikis were there to make off-the-cuff quips about everything from melting glaciers to Uranus (pronounced the way you'd expect them to pronounce it).

It's hard to deny that we're living in a curious time -- one when a venue typically reserved for rock stars can instead fill seats for a show featuring a geologist and an astrophysicist. (They study rocks and stars -- get it?) "Science is trending," is Tyson's way of characterizing the attention, although obviously, it's something more than that. His popularity is about more than dazzling people with the mysteries of the universe, though he's plenty good at that. What's trending is the pushback against certain conservative sectors who would rather science not factor into their beliefs, philosophies of education or political decisions. What's trending is the frustration, on the part of those living in the 21st century, with what at times feels like an epidemic of anti-science sentiment.

"Cosmos," as writer and executive producer Ann Druyan recently told the L.A. Times, was written as much to be a contribution to the "culture wars" as it was to entertain the masses. The reboot of Carl Sagan's original, as Druyan, who's Sagan's widow, explained, was conceived of seven years back, when "public hostility towards science was really naked." That was around the last time the U.N.'s International Panel on Climate Change  released a report summarizing the threat posed by a warming planet; since then, the warnings from the scientific community have only become more urgent -- the IPCC, this year, made it clear that the impacts of climate change are already being felt -- and the response, from some, more entrenched in denial.

The premise of "StarTalk" is even more nakedly political than "Cosmos'" similar warnings and cautionary tales about the trials of past scientists whose messages the public wasn't prepared to hear. Unlike the television series, which uses high-tech graphics, dramatic music and the "Spaceship of Imagination" to wow viewers with the sheer awesomeness of science, the radio show comes off as more of a dinner party conversation about the serious problems facing the world right now, and how science can help us understand them.

The show's conceit, as Tyson explained to the audience, is to take the traditional model, in which the journalist interviews the scientist, and turn it on its head, so that it was Tyson, as scientist, asking most of the questions. In the role of interviewer, he was reluctant to offer political opinions of the type he made recently on MSNBC. But the audience he attracted was overwhelming made of the same ilk as Chris Hayes' viewers: While Tyson's mere presence earned adulations from the crowd, his panelists got loud rounds of applause every time they shouted out a liberal buzzword -- gender equality and corporate greed were two particularly popular ones. And if you've ever been in a Jewish synagogue during the holiday of Purim, when congregants boo, hiss and rattle noisemakers every time the rabbi utters the name of the evil king Haman, you can begin to approximate the crowd's reaction when Kennedy named the Koch brothers -- a feat he managed to accomplish twice.

While the conversation covered some weighty issues, from drought to the civil war in Syria to the struggle of people in third-world nations to gain access to clean water, the overall tone was one of optimism. The larger frustrations, with the structural and political roadblocks contributing to such problems, remained on the back boiler until the end of the night, when the radio portion was over and the group took questions from the audience. Lining up at the microphone, some just wanted to hear more about why ice is slippery, but the majority took the leap that Tyson didn’t, demanding answers for the big questions: questions about fracking, meat consumption, climate change. It was then that Tyson began to chime in with more of his own opinions, as, for example, when one person asked if, in the case that all water became polluted beyond repair, humanity could theoretically adapt to remain able to use it.

“Believe it or not, I think a lot about those issues," Tyson admitted. "Because the question is, what is easier or harder or cheaper or more expensive: finding a solution to a problem, so that the problem is solved, or adapting to the problem so that you never have to solve it, but you can keep living with it.”

He chose the more inspiring route: “I like to think that if we have the power of genomic engineering to change our physiology so it could survive polluted water, that that world would have enough power to have purified the water in the first place." The crowd went wild.

But when the conversation moved beyond science to politics, it became harder to come up with satisfying answers. “This climate change, and water pollution – it is happening. It’s proven that it’s happening,” one young girl addressed the guests, cutting through to the heart of the matter. “Why is it such a big political problem? Why does everyone have to debate about it? I mean, we know that this is happening ... and that it will affect us in the future, in the very close future.”

This time, when Tyson chimed in, he seemed to have trouble keeping up his optimistic tone: “We live in a world where people ... they ...” he struggled to begin.

“Don’t sugarcoat it,” someone in the crowd called out.

“We live in a world where people want something to be true, whether or not it is,” he finally ventured. “And that’s a peculiar state of democracy, because it has an unstable foundation for anything that’s wrong. And so I keep wondering whether we just have to collapse as a civilization, and from that state, have our interests aligned to move forward.”