What happens if Democrats hold their convention in Brooklyn?

In addition to making Chuck Schumer very happy, here's why it won't be the strategic error skeptics claim 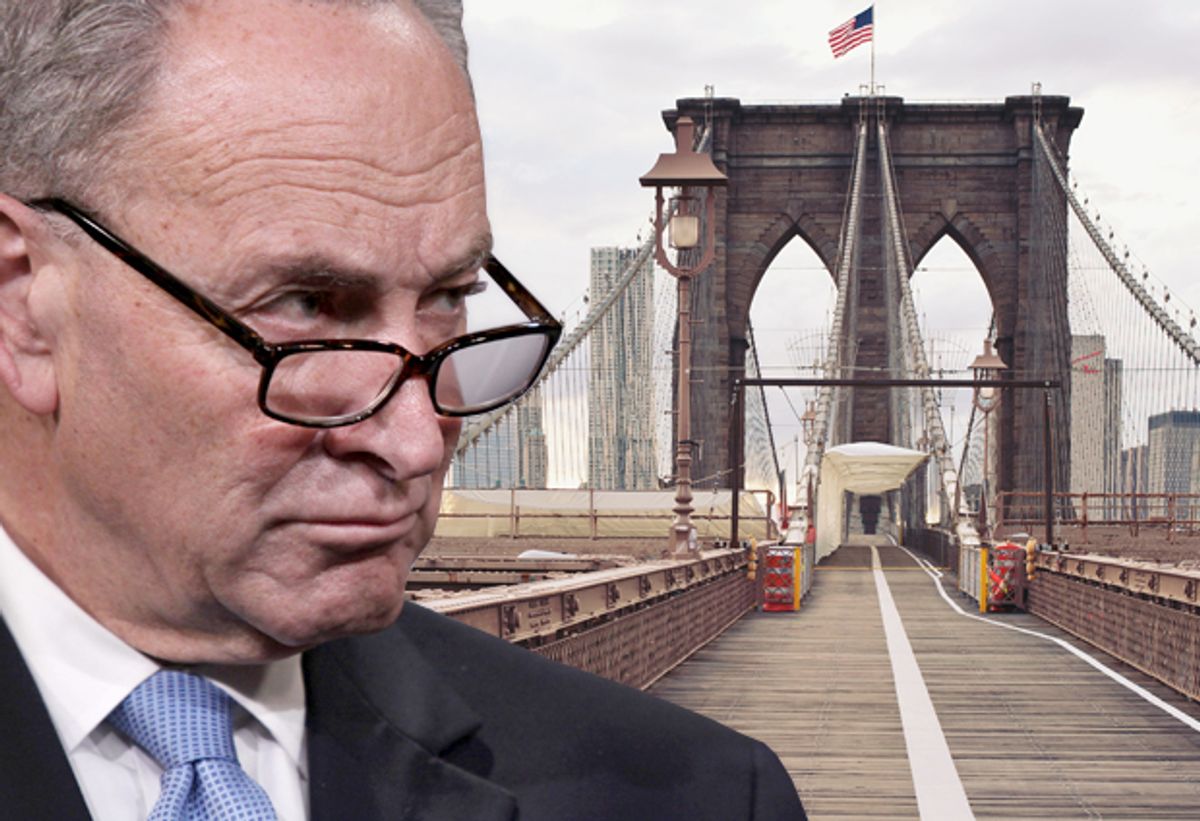 Brooklyn has entered a bid to host the 2016 Democratic National Convention. And what a billing it gets from the New York Times! "Brooklyn, a nexus of the new Democratic left that has morphed from working-class enclave to a gritty, global arbiter of cool, will vie to host the Democratic National Convention in 2016." You hear that, folks -- a nexus! And if ever there was a perfect match for the "global arbiter of cool," it's one of America's two despised political parties.

There are logistical pros and cons to holding the convention in Brooklyn -- or, as some would call it, "New York City." Reporters and political writers, the most important of groups whose care and comfort the party has a holy responsibility to ensure, will enjoy this, since most of them either live in NYC or have friends there with whom they can crash. No more entering a lottery to win a precious, coveted Days Inn double 90 minutes from the venue. New York is also good for fundraisers and lobbyists. They won't have to fly in all the rich people; the rich people will already be there.

New York may be a terrible idea, on the other hand, because it is very crowded and cramped pre-convention and will become an absolute nightmare during the convention.

The last time a national party held its convention in New York City was in 2004, when the Republicans renominated President George W. Bush in a campaign based on exploiting 9/11. If the Democrats held it in NYC in 2016, it would be under vastly different circumstances: a celebration of liberalism! Under Hillary Clinton!...?? Make of it what you will.

Selecting New York City would also break, quite obviously, from the reigning political strategists' convention-locating wisdom. As the Times writes, selecting Brooklyn "would be a stark departure from the recent tradition of political parties hosting their conventions in swing states like Florida and Colorado, which can be critical to clinching a national campaign."

Sure, theoretically, hosting a convention in a swing state can be critical. But has it really mattered that much?

In 2008, Democrats held their convention in Denver. Barack Obama ... won! ... Colorado that year, in an electoral rout. In 2012, they held it in Charlotte. Barack Obama lost North Carolina, one of only two states -- the other being Indiana -- that he won in 2008 and lost in 2012. The Democrats have done the convention-in-safe-territory thing a couple times in recent history, too. It was held in Los Angeles in 2000, and they lost the election. (Sort of.) It was held in Boston in 2004, and they lost that election too. Did they lose either of those elections because they failed to plunk a Al Gore or John Kerry party in Florida or Ohio for a few days? It's not like they weren't visiting those states a million times already.

The evidence is mixed, but seems to lean toward "not mattering too much" where a party holds its convention. This is because the convention, itself, isn't the blockbuster, win-or-lose moment of a presidential campaign anymore. It's almost a relic of campaigns of yore when the season and schedule was lighter, and setting up shop for a few days in a particular state could really make an impression -- both among voters and in terms of greasing up local operatives. If the Democrats don't have their convention in, say, Orlando or Cincinnati, their presidential candidate will still be visiting those places a full 175 million times during the rest of the campaign.

Having a convention in a major stronghold -- a nexus, even! -- of a party's supporters would at least be more honest about contemporary politics: these are 50 percent-plus-one elections, now, not reliant on some great depth of "swing voters," of which there are approximately 11 or 12 remaining in the United States. The GOP is including a base-rallying option in its 2016 finalists, too: There's Denver, Columbus, Kansas City and ... Dallas. Sure, why not? (OK, perhaps the GOP does have more crossover-appeal work to do than the Democrats ahead of this coming election cycle, so Texas may be a little much.)

This is not a much-sought-out Salon Endorsement of Brooklyn. This Salon writer, at least, suggests that both parties hold their conventions in Hawaii, every election cycle. But selecting Brooklyn wouldn't doom the party's chances in Florida, Ohio or ... whatever the other swing states are? Is that all of them? Virginia.