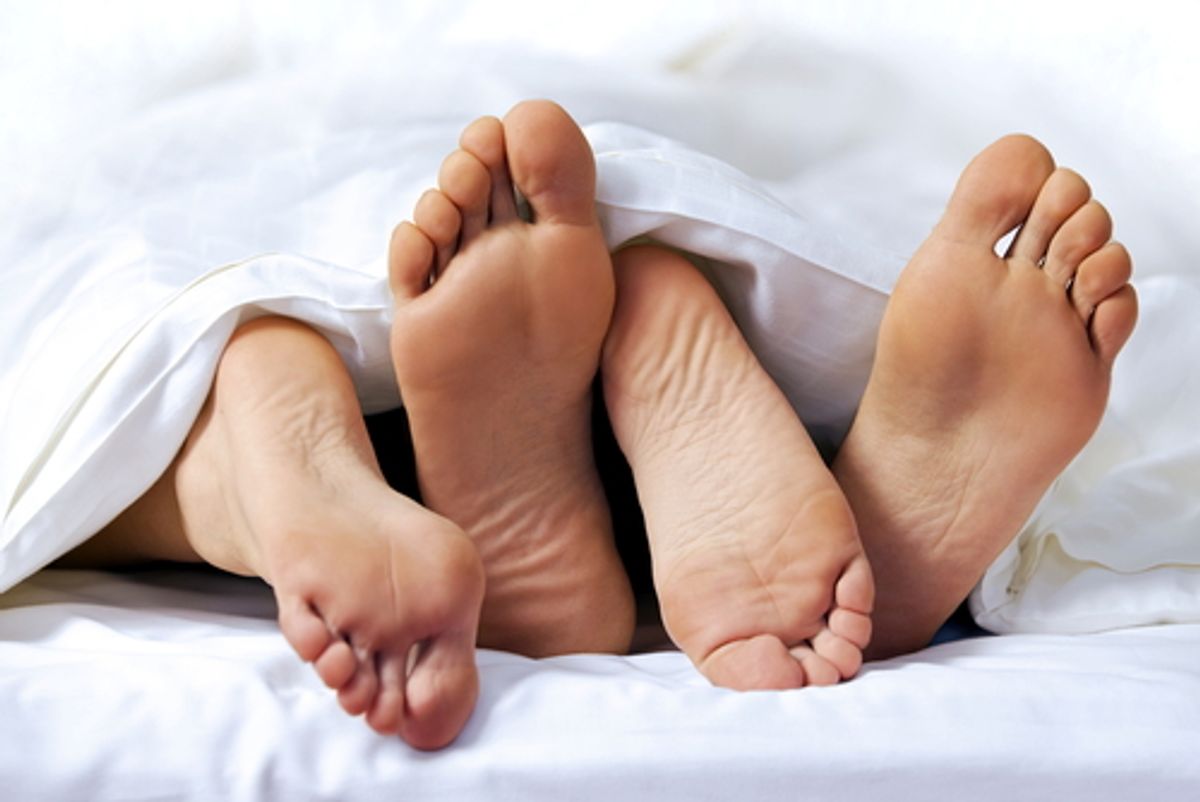 We get many things right here in the good ol’ U.S. of A. We were the first to put a man on the moon (Neil Armstrong), the first to achieve flight (the Wright brothers), and we came up with the greatest television phenomenon ever: Shark Week. But when it comes to sex, we are all mixed up. For all of America's cultural pornification—we can’t even sell a router or a chicken sandwich without a bikini-clad model dry-humping it—we still haven’t let go of a lot of the puritanical values our country was founded on. Here are a few of the things our otherwise great nation gets wrong about sex and sexuality.

1. Sexual healthcare is not a priority.

Unless we get pregnant, a raging case of crabs, or need erection pills, it’s pretty rare for Americans to schedule an appointment with a doctor for sexual health reasons, even though the World Health Organization tells us that sexual health is “a state of physical, emotional, mental and social well-being in relation to sexuality; it is not merely the absence of disease, dysfunction or infirmity.” Since Americans barely get any kind of health care at all, and the tiniest amount of sex education in school, it’s not surprising that people only visit doctors for sexual reasons under the most dire of circumstances, and not equally important concerns such as sexual ethics, consent, gender identity, trauma care, and desire. It’s also not surprising that we have the highest STD rates in the industrialized world. A recent report called our rates an “epidemic.” We’re number one!

Abstinence-only education—that is, teaching children, primarily girls, that the only way they can preserve their self-worth is to wait until they are married to have sex—has been a popular pastime in the U.S. for roughly the last 20 years, despite the fact that it’s been repeatedly proven not to do a damn thing to prevent teenagers from having sex. In fact, it does the exact opposite by negatively impacting condom use and sexual health.

Some lawmakers are still trying to pass legislation to end federal funding for abstinence-only programs, which mushroomed under George W. Bush, and which Obama later eliminated, only to have Republicans restore them as a concession to social conservatives under Obamacare. Thus far, however, lawmakers have been unsuccessful at ending the insanity. If only conservatives practiced abstinence as much as they preached it....

3. Discrimination against LGBT people is rampant.

In 2014, you can still get fired for being gay, lesbian, or bisexual in 29 states. The number increases to 33 states if you include transgender people. The stigmatization of sexual minorities also leads them not to seek sexual healthcare (and general healthcare) as often as their straight counterparts, leading to poorer health overall, mental health issues and long-term problems. Many don’t even feel comfortable coming out to their doctors, potentially putting them at higher risk for more serious illnesses.

And don’t even get us started on how many Americans believe bisexuality doesn’t exist.

4. We have seriously warped body images.

We recently watched Unhung Hero on Netflix (it’s not bad!) about our cultural obsession with penis size, and one man’s hilarious and at times depressing attempts to increase his schlong’s length and girth. What with the countless pills, penis pumps, surgical enhancement opportunities, and porn-penis obsessions, it’s obvious that America is hung up (sorry) on the idea that having a monster penis is the only way to be a fully actualized human man. This obsession is generating a lot of money for penis-enhancement companies, but in terms of effectiveness, the “gains” such enhancements produce are often in the realms of insecurity, doubt, loss of sensation, and discomfort.

6. Our popular magazines offer the most bizarre sex advice.

What country besides ours would suggest women fellate a pastry in order to be more sexually satisfied? Thanks to the likes of popular magazines like Cosmopolitan and Men’s Health, Americans are taught the most absurd things about sex, such as the notion that snorting pepper to increase orgasm intensity is a fine idea, presenting your lady with a dick dipped in Nutella will get you an “enthusiastic blow job,” and the smell of toast is an incredible aphrodisiac.

Ugh, the fact that we even have a term for it is depressing, but if anything can be gleaned from the recent atrocities of the Santa Barbara massacre and the #yesallwomen campaign, it’s that the way our country views women, sexual violence and female sexuality is seriously skewed. Women are routinely blamed, stigmatized and called names for the sexual harassment and assault they experience.

In addition to the fact that rape culture attempts to normalize sexual violence, the virgin-whore dichotomy also contributes to our warped views on female sexuality. As Ally Sheedy’s character in The Breakfast Club noted about America’s views on female sexuality almost 30 years ago, “If you haven’t, you’re a prude. If you have, you’re a slut. It’s a trap.” Sadly, America's views haven't changed much.

Lest you think this is just the wacky South, Cleveland has a law against showing underboob, defining “nudity” as a “female breast with less than a full, opaque covering of any portion thereof below the top of the nipple.” Having premarital sex is still considered a “crime” in Massachusetts(comes with a $30 fine and up to a three-month imprisonment), Idaho ($300 fine and up to six months jail time), and Utah (class B misdemeanor). And of course the South doesn’t smile upon unmarried sex either: Mississippi promises a fine up to $500 and six months jail time, North Carolina law says you can’t “cohabit together,” and South Carolina sex packs a whopping fine of up to $500 and up to a year in jail.