Eric Cantor should beat his primary challenger tonight, but the anti-immigration crowd has already made its point 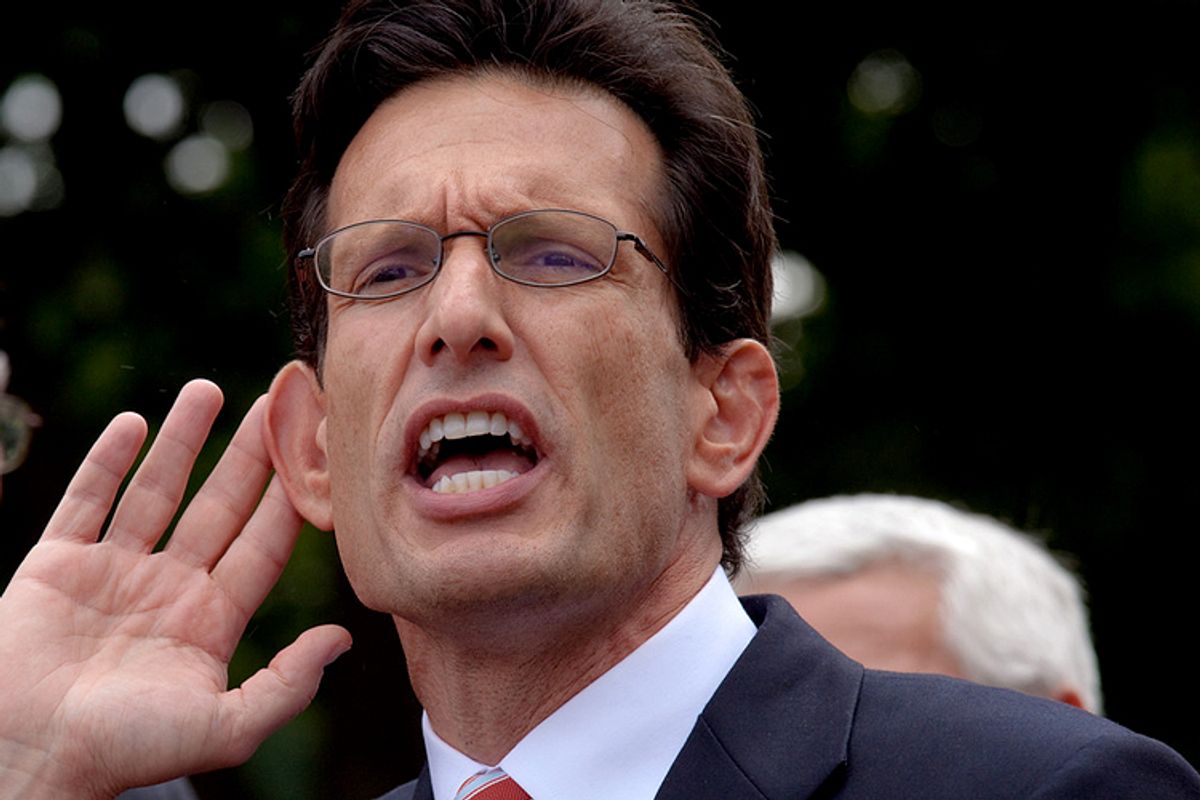 As a hobby, scanning the Drudge Report for signals of what rabbit hole the conservative brain has gone down at any given point has lost some of its novelty over the years. Still, it was hard not to notice this morning that Drudge, in the prime upper-left real estate of his site, had listed a full 14 links regarding immigration and a supposed impending push for "amnesty" among the House Republican leadership. (Personal favorite: "Kids Complaining Burritos They're Being Fed Making Them Sick...") What gives on this sleepy Tuesday? We learned last week, after all, that the House won't hold any immigration-related votes in June. That leaves the leadership a few weeks in July to pass the unicorn-like Secret Amnesty that's not in its interest to pass. Why is it so vital to whip up the conservative base about immigration reform on today of all days?

Cantor is facing a challenge from the right in the form of a little-known college economics professor named David Brat. Brat has taken all the easy leadership-sellout hits on Cantor, such as his support for raising the debt ceiling. (If you're wondering why a college economics professor would criticize someone for raising the debt ceiling, it's because Brat is what we'd call a "special" economics professor. He's the director of something called the "BB&T Moral Foundations of Capitalism" at Randolph-Macon College, funded by a rich nutter who doesn't think the kids are reading enough Ayn Rand these days.)

The main flashpoint in the race, though, is immigration reform. Brat, like many in the conservative movement, sees Cantor and the House leadership as always one breath away from jamming amnesty and cheap Mexican labor down the throats of God-fearing White American people. Cantor, especially, since he's a major fundraising conduit for the Republican business community, which wants to see immigration reform get done. Brat is playing off of these fears of What Cantor Might Do. "Eric Cantor doesn’t represent you and he doesn’t represent … the 7th District of Virginia," Brat has been saying on the trail. "Eric Cantor represents large corporations who want a never-ending supply of cheap, low-wage foreign labor ... Eric Cantor saying he opposes amnesty is like Barack Obama saying he opposes Obamacare.”

The race hasn't gotten that much national media coverage, but it's sure grabbed the attention of the prominent right-wingers who devote their entire lives to stopping comprehensive immigration reform. There's Drudge, of course. And Ann Coulter. And radio/TV personality Laura Ingraham, who recently suggested that the United States should have traded Eric Cantor to the Taliban for Bowe Bergdahl. And the writings and tweets of Mickey Kaus, now of the Daily Caller, have been indistinguishable from those of a Brat staffer in recent months.

The polling in VA-7 has been nonexistent, except for one poll last week commissioned by ... the Daily Caller. So take it with a hefty spoonful of salt. Counting both strong and leaning supporters, Cantor held a 52-40 advantage over Brat. That's a relatively close primary margin for a House majority leader. (Although, again, it may be wider after factoring in the "commissioned by the Daily Caller" effect.) Of course it would be hilarious and amazing if Cantor were to lose his primary tonight, and everyone should be rooting for Brat for this reason. It's just highly unlikely. Still, the threat at least has been real enough for Cantor and his allies to take it seriously and dump astonishing amounts of money into the race.

Moreover, the primary challenge has been effective in getting Cantor to tack to the right on that issue of most critical import to his intra-party rivals, immigration. Cantor's campaign has been sending out mailers, reading, in big letters, "CONSERVATIVE REPUBLICAN ERIC CANTOR IS STOPPING THE OBAMA-REID PLAN TO GIVE ILLEGAL ALIENS AMNESTY."

So what are the Serious Insiders looking for in tonight's VA-7 results? The margin of victory, according to the Wall Street Journal. Its width will determine how willing Cantor is to go about abandoning his red-meat primary rhetoric and push through immigration reform in the narrow legislative window remaining this summer:

Challenger David Brat looks almost certain to lose, but the margin may say something about the potency of the issue and could influence Mr. Cantor’s thinking about whether to move ahead. House Speaker John Boehner would like to bring immigration legislation to the House floor, but opposition from Mr. Cantor would make it virtually impossible to move ahead.

But we're also coming back to this naive old theory, existing equally as a hope among the GOP business wing and a fear among the anti-immigration wing, that once GOP politicians get through their primaries employing harsh anti-immigration rhetoric, they'll simply abandon that and immediately push through a comprehensive immigration reform package including a path to citizenship. And it's still not that likely. That's because the theory is blind to the existence of future elections. Should Eric Cantor win his primary, flip base voters the bird and put amnesty on the schedule the next day, it's probable that he'd get a serious primary challenge in 2016 -- and in that race, his opponent would have actual evidence of a Cantor betrayal.

For those of us who enjoy comedy, it appears, sadly, that Brat won't be able to pull it off tonight. But he and his supporters may have already achieved what they wanted -- in getting Cantor to fully debase himself.