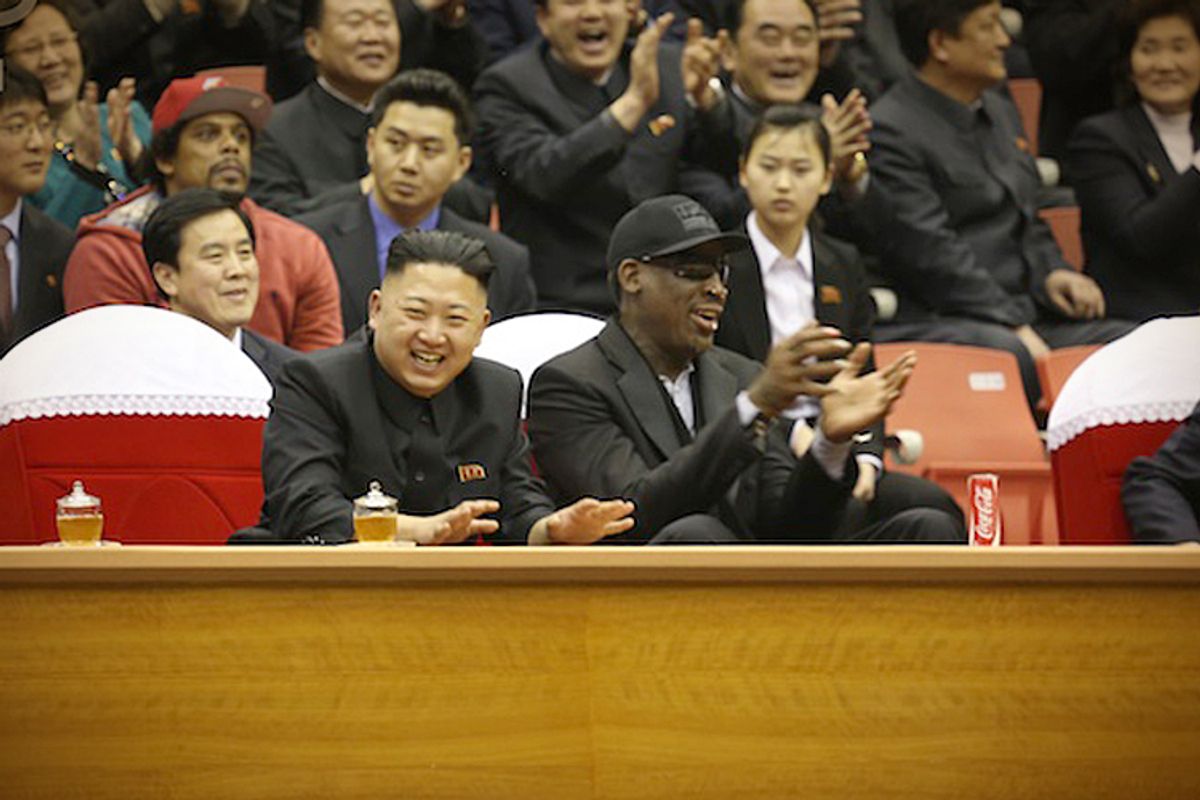 If media reports are correct, Time-Warner, having safely divested itself of the landmark journalistic publications created by Time's founder Henry Luce (Time, Fortune, Sports Illustrated...) now plans to get in bed with Vice, a media outlet most recently famous for embarrassing all thinking people by sending Dennis Rodman to North Korea and then producing a TV show about it.

Details are hazy so far, but the gist of the deal appears to be that Time-Warner will hand over its HLN channel (formerly Headline News) to Vice in exchange for about 50 percent of the company, which is expected to be valued at around $2 billion dollars.

Outside of Nancy Grace groupies obsessed with the latest dastardly murder committed by comely young women, just about nobody watches HLN, a fact that is especially true of young people (excluding, perhaps, those who have murders they want publicized). Vice, one presumes, is expected to change this sad state of affairs. Effectively, Time-Warner has jettisoned the aging boomers who still cling to their weekly magazines in favor of the millennials who can't go more than a few minutes without getting an update on how Junglepussy can teach them "how to eat, date, text, and live the life of a take-no-shit power bitch."

At PandoDaily, David Holmes is skeptical that anyone, even Vice, can "convince youngsters to watch cable news."

VICE already has enormously popular YouTube channels, which is where millennials are most likely to go to watch videos – would having a cable news outlet simply be like screaming into the abyss?

Setting aside the possibility that Vice has perfected a business model in which "screaming into the abyss" is a cash cow, Holmes' question is reasonable. But focusing on how well HLN does might be looking at this from the wrong end of the abyss. Maybe, instead of steering millennials towards HLN, Vice will take HLN and turn it into a launching pad for the viral video it so successfully propagates elsewhere.

We're rapidly approaching the point where distinguishing between what comes us to via "cable" and what comes via the "Internet' is meaningless. As far as millennials are concerned, a majority of them probably watch Jimmy Fallon's Tonight show via whatever viral video pops up in their Facebook or Twitter feeds. The same is likely going to be true for future installments of Vice's Dennis Rodman reality extravaganza, whether originating at HLN or on the Vice HBO show or YouTube...

So yeah, the brand nurtured to global fame and fortune by Henry Luce, who is credited by Wikipedia as creating the "first multimedia corporation," is joining forces with a news org that is flogging on its front page a news story, with NSFW video!,  flaunting the headline "Put a Sombrero on Your Dick with the Rock That Cock App."

The notoriously conservative, anti-Communist Luce might well be compelled to wonder: We saved the free world, for this?