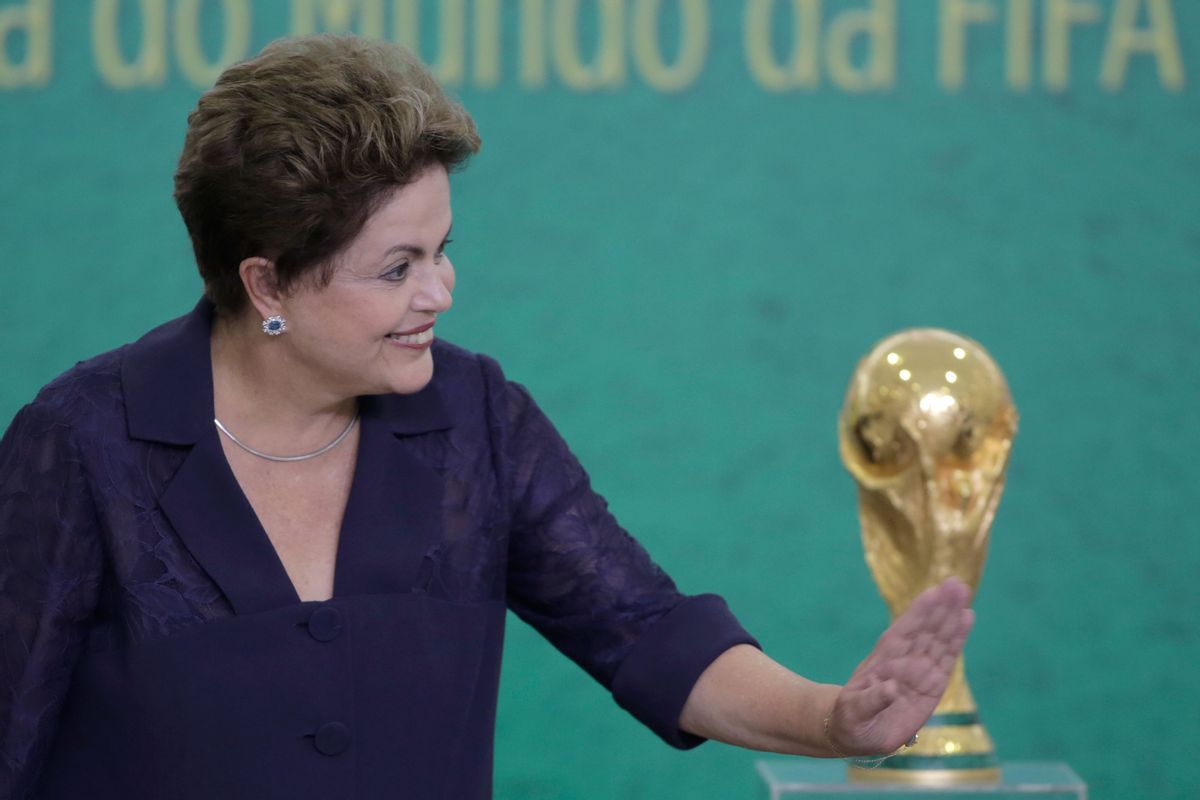 FILE - In this June 2, 2014, file photo, Brazil's President Dilma Rousseff waves to children at a ceremony where FIFA President Sepp Blatter presented the 2014 World Cup trophy to Rousseff at the Planalto presidential palace, in Brasilia, Brazil. President Rousseff has taken to the nation's airwaves Tuesday June 10, 2104, to deliver a pre-taped address trying to rally the nation behind the World Cup that begins this week. (AP Photo/Eraldo Peres,File) (AP)
--

RIO DE JANEIRO (AP) — President Dilma Rousseff appealed to Brazilians to support the World Cup, using a nationally televised address less than two days before the tournament starts to rebuke the "pessimists" who complain the country shouldn't be hosting the event.

Brazil's World Cup preparations have stoked countless protests from those angered by the billions spent on the event while the quality of public services in the health, education, security and transport spheres is lacking.

In a pre-taped speech aired during prime time Tuesday night, Rousseff called on all Brazilians to back the national team regardless of their political persuasion or whether they fully agree with the nation hosting the event.

"I'm certain that in the 12 host cities, visitors are going to mix with a happy, generous and hospitable people, and be impressed by a nation full of natural beauty and which fights each day to become more equal," she said, referring to sharp drops in poverty that Brazil has seen in the past decade under Workers Party leadership.

Rousseff also defended the $11.5 billion spent on the Cup. Three out of every four Brazilians polled say they are convinced that corruption has tinged the myriad works related to the Cup.

An Associated Press investigation earlier this year found that big construction firms responsible for building the bulk of the stadiums, roads and other works had dramatically increased their campaign contributions since Brazil was named as the host of this year's Cup.

Much of that money was funneled to Rousseff's ruling Workers Party though spending also went to the opposition. In one case, top builder Andrade Gutierrez, which has helped build or renovate four stadiums, hiked campaign contributions 500-fold from one election to the next after it was determined which 12 cities would host matches.

That stoked anger and increased suspicions about collusion between politicians and the big builders — especially after reports from government auditors began to surface, indicating massive cost overruns along with allegations of price-gouging, principally in the building of stadiums. For instance, the cost of the stadium in Brasilia, a city with no major professional soccer team, has nearly tripled to $900 million from original price estimates published by the government.

"Have no doubt, the accounts of the Cup are being meticulously analyzed by auditing agencies," Rousseff said. "If there exists any irregularity, those responsible will receive the maximum punishment."

About half of Brazilians polled have said they're against even hosting the World Cup and the mood is mixed about the event just days before it starts. That was once unthinkable for a nation that embodies soccer like no other, the country that has won the World Cup a record five times.

However, many Cup watchers also think that if the Brazilian team gets on a roll and starts winning, the mood could quickly pivot and the nation could show the world a celebration worthy of its international reputation as a land of free-wheeling festivals and easy going, friendly people.

Rousseff said that "for any nation, organizing a Cup is like taking part in a tough — and many times painful — game."

The leader rebuked those who argue Brazil has spent too much on the Cup, saying that since 2010, the government has spent more than 200 times what it invested in stadiums on education and health care systems.

Adding to fears of chaos during the Cup, subway worker unions in Sao Paulo and Rio de Janeiro were both expected to announce decisions soon on whether they would call transportation strikes for the coming days.

Rousseff, whose poll numbers are slipping ahead of an October political election, concluded her speech by urging all Brazilians to rally around their team, whom she addressed directly.

"Beneath those green and canary jerseys, you embody a powerful legacy of the Brazilian people. The national team represents nationality," she said. "It's above governments, parties and interests of any group."