Eric Cantor is as conservative as they come and it wasn't enough for the far-right fringe. Here's what it all means 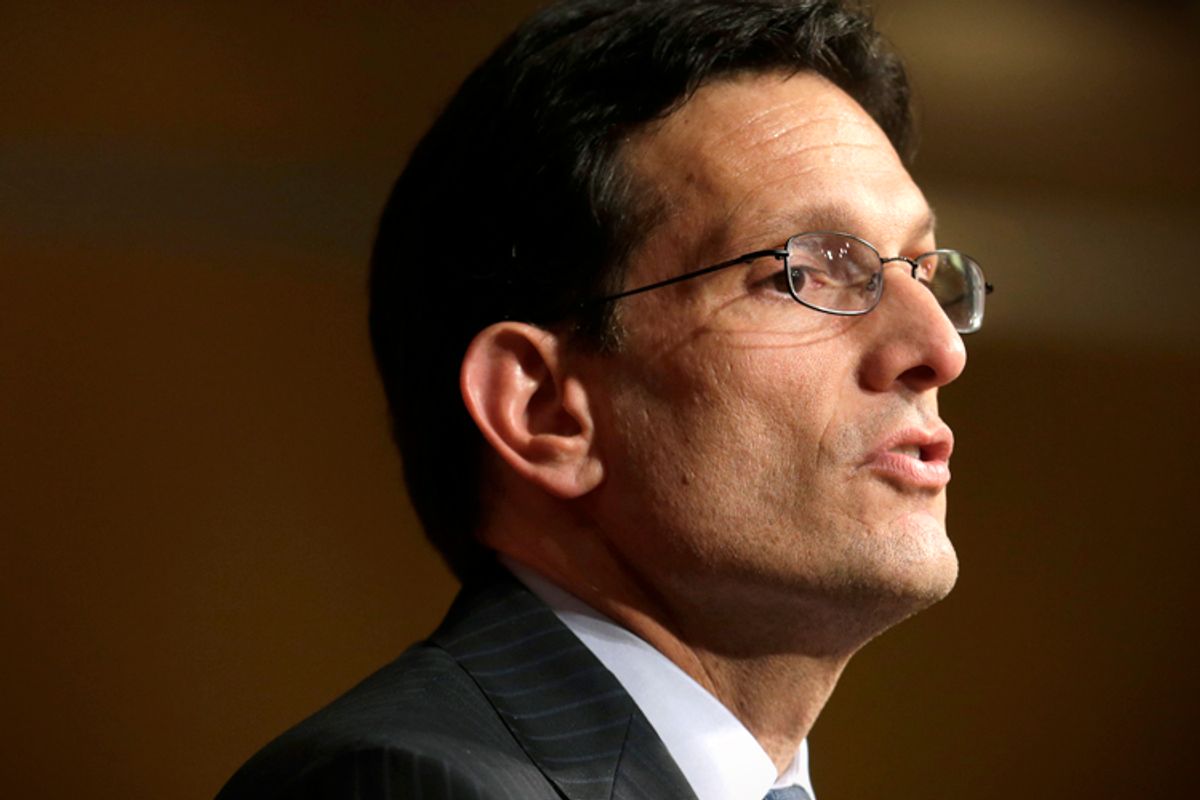 Eric Cantor represents something of an oddity in American politics. It’s not just that his loss last night to goofy economics professor David Brat in the Virginia 7th District GOP primary was unexpected* and lopsided, though it was. And it’s not just that he’s the first ever sitting House majority leader to lose a primary, though he is. What made it especially strange is that Cantor is basically everything Republicans could ask for in a majority leader – conservative, obstructionist, deferential to the Tea Party – and he still got booted out.

In January 2009, when President Obama debuted his stimulus package to prevent the cratering economy from collapsing entirely, Cantor announced that not a single Republican would vote for it, telling his staff that it was key that the White House not get any GOP defectors and thus claim a bipartisan label for the legislation. He succeeded, and Cantor and the rest of the Republicans have been complaining about the stimulus Obama “rammed through Congress” ever since.

In the interminable fights over raising the debt ceiling, Cantor was one of the key negotiators and used his clout to stand up for Republican interests – chiefly, opposition to any sort of tax increases as part of a compromise package. Ryan Lizza’s profile of Cantor from last March makes clear that Cantor, more than anyone, was responsible for the hard-line conservative obstructionism in the House: “For the past two years, he has anchored the Tea Party, as the leader of House conservatives and the creator of a strategy to oppose and obstruct the Obama agenda.”

You could plausibly argue that no one is more responsible for preventing the passage of any sort of immigration reform than Eric Cantor. “Cantor wasn't prodding members to act on immigration reform in 2014,” Dara Lind writes for Vox. “Insider reports cast Cantor as either indifferent to immigration reform, or quietly working to avoid it and undermine Speaker Boehner. It's hard to imagine what more could have been done by a House Majority Leader to stymie immigration reform.”

But for David Brat and the Tea Party, that wasn’t sufficient.

Brat’s campaign was organized around the premise that Eric Cantor was a proponent of “amnesty.” Here’s how Cantor sinned, according to the candidate comparison posted on Brat’s website:

Eric Cantor was the chief architect behind the ‘Kids Act’ which would have provided amnesty to most illegal immigrants under the age of 30. Cantor cited immigration reform as a “top priority” in 2014.

The Kids Act is, as you probably guessed, aimed at providing a pathway to citizenship for undocumented immigrants who were brought to the country as children. It was described as a Republican-friendly version of the Dream Act, crafted with an eye on perhaps doing something to smooth over the worsening relationship between the GOP and Hispanic voters. But to reform opponents, it was just another flavor of “amnesty.” It doesn’t matter that the Kids Act never materialized, and it doesn’t matter that Cantor did nothing to encourage immigration reform. He called it a priority once, and that was enough to seal his fate.

And that gets us to what the GOP is looking at going down the road. Last March, the Republican National Committee strongly recommended that the party pass comprehensive immigration reform in order to stanch the bleeding when it came to Hispanic support. “If we do not, our Party’s appeal will continue to shrink to its core constituencies only,” the committee warned.

That obviously didn’t happen – in fact, from an outreach standpoint they’re worse off now than when they started. Immigration reform was dead before they began tallying votes in Virginia last night, and the guy who helped kill it was beaten by the allegation that he supports “amnesty.”

Brat’s win also sends the message that deviation from conservative orthodoxy – even rhetorical – carries the risk of retribution from the activist base, which is growing increasingly extreme and irrational in its standards for purity. As Eric Cantor found out, even loyal and effective obstructionism is no guarantee you won’t end up on the Tea Party’s shit list.

*In the interest of promoting pundit accountability: I was among the many people who thought Cantor would win and win handily. I also argued at the time that a strong enough challenge from Brat would push Republicans further away from immigration reform.