Was Mark Zuckerberg the kiss of death for Eric Cantor? 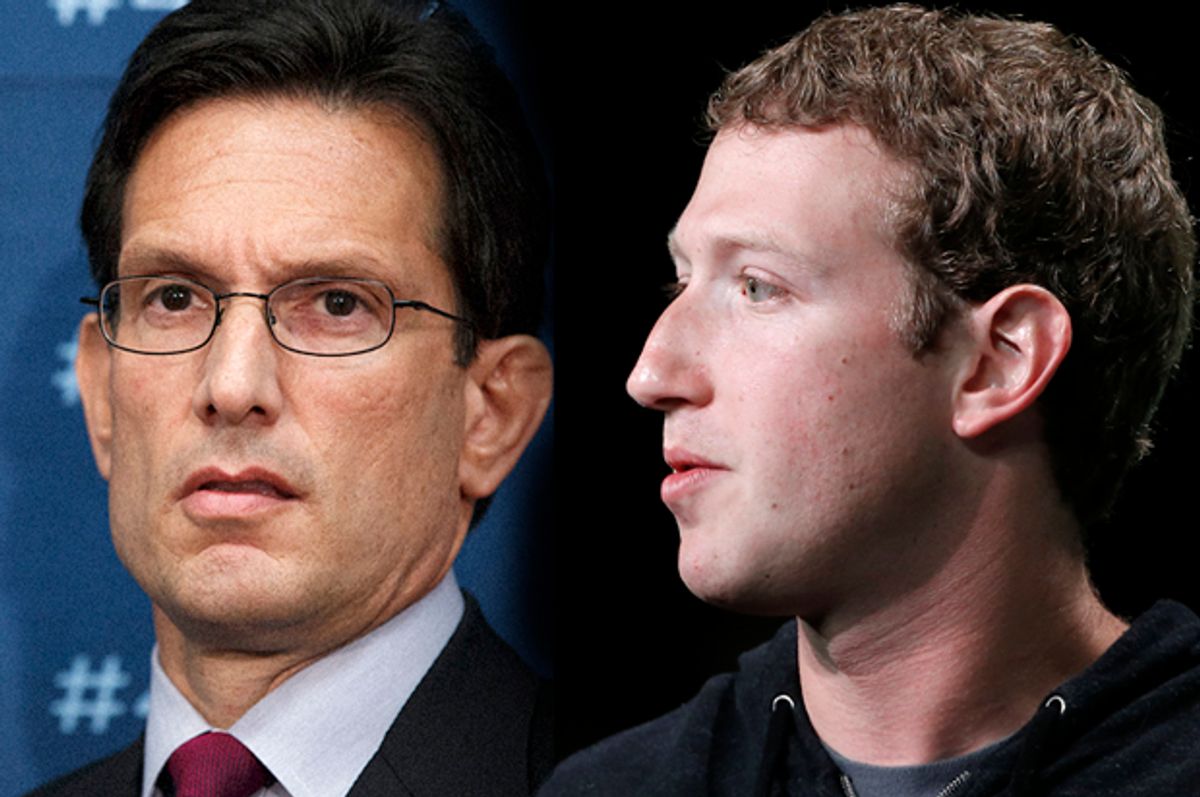 Two weeks before House Majority Leader Eric Cantor lost his primary election, his challenger Dave Brat launched a campaign ad featuring Cantor with his arm around the shoulders of Facebook CEO Mark Zuckerberg. The text of the ad read as follows:

“There are 20 million Americans who can't find a full-time job. But Eric Cantor wants to give corporations another 20 million foreign workers to hire instead.”

The purpose of the ad was to link Cantor to immigration reform, a cause that Zuckerberg (and much of Silicon Valley) considers a No. 1 political priority. And while we can't say for sure whether the issue of immigration reform was the knife in Cantor's back, the subtext of the ad is intriguing: The Tea Party sees Silicon Valley as toxic. Mark Zuckerberg is an enemy of the people!

Last November, the Hill reported that Zuckerberg had named immigration reform "one of the biggest civil rights issues of our time." One has only to look at the comments appended to that article when it was copy-and-pasted to www.teaparty.org to see why Brat's campaign team figured associating Zuckerberg with Cantor was a knockout punch.

The comments are a typical putrid brew of racism, xenophobia, illiteracy and anti-Semitism -- but there's also a strain of good old American populism, a strong sense of anger at the fact that America's corporate executives care more about the bottom line than they do the welfare of the American people.

Zuckerberg is a phony sell out who only wants cheap labor.

The kind of money these people have can negate millions of your votes and buy Washington. This is no longer a democracy-its a money game, and these people know it.

Zuckerberg is an idiot and a betrayer to all us LEGAL BORN AND LEGAL IMMIGRANTS!

And so on. It should go without saying that suspicion of Silicon Valley civic-mindedness is not limited to the Tea Party right. But Cantor's defeat may mark the most prominent political deployment of the tech-mogul-as-villain trope to date. And it bears watching. Because Cantor is hardly alone in Republican leadership circles in cozying up to Silicon Valley. As Breitbart reported on May 30, the full photograph from which the Zuckerberg-Cantor clinch was sliced also included GOP whip Kevin McCarthy and House Budget Committee chairman (and likely presidential hopeful) Paul Ryan (as well as Facebook's Sheryl Sandberg and venture capitalist Marc Andreessen, who is also a big supporter of immigration reform).

The photo was taken in 2011, several years before the creation of Zuckerberg's lobbying group FWD.us. The Republicans spent their time attacking government regulations on business and do not appear to have mentioned immigration, but that may be a distinction without a difference. American populists on both the left and the right distrust close linkages between politicians and big business. Dave Brat's victory is a signal that that distrust is electorally meaningful. Silicon Valley thinks of itself as the epitome of progress, but that opinion is not shared in Virginia's 7th Congressional District. How this plays out in the midterm elections and the Republican presidential primaries will be quite illuminating.