Fox News' "high five" idiocy: Why they're so confused about teenage boys 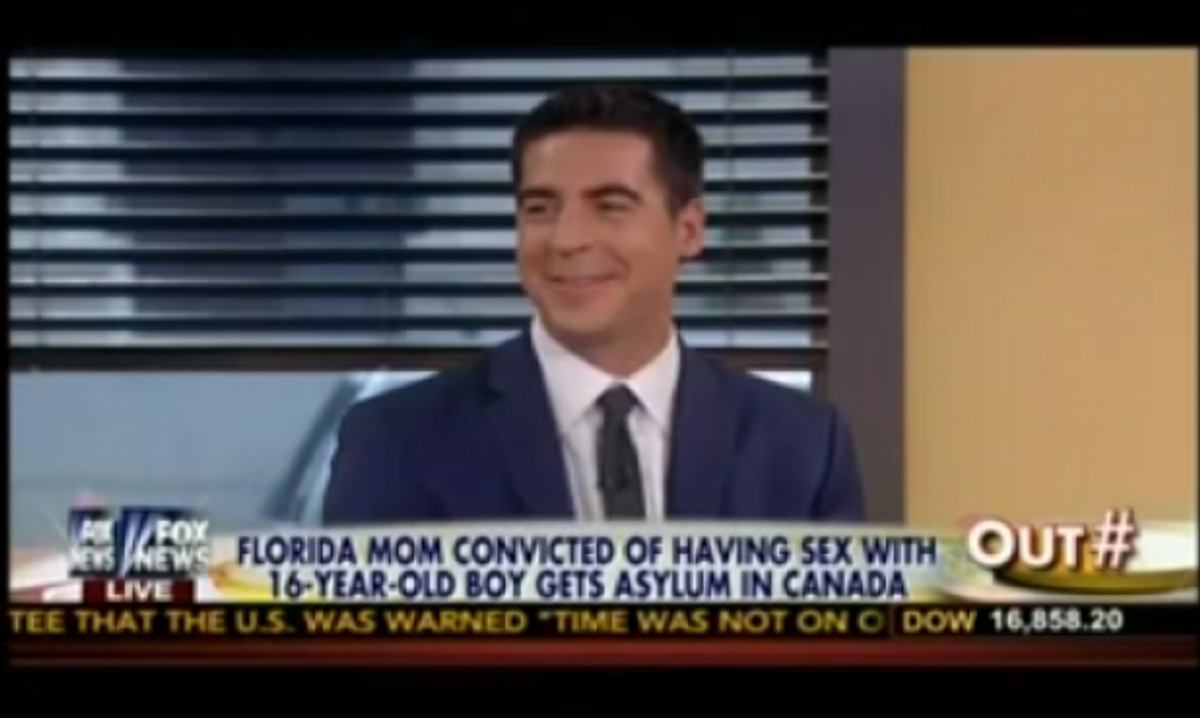 On Fox News' "Outnumbered" on Wednesday, contributor Jesse Watters weighed in on a statutory rape case involving a 46-year-old woman and a 16-year-old boy by remarking, "It is a serious crime. But if you're a 16-year-old kid and you have sex with your best friend's mom, you usually get high fives." This is a totally normal thing to say when speaking seriously about serious crimes, because most statements that begin with "serious crime" usually end with "high fives." The more serious the crime, the more high fives are usually given. Everyone -- most especially Jesse Watters -- knows this is the best way to talk about serious crimes.

Watters went on to theorize that rape is somehow less traumatic for the male victim if the female perpetrator is "attractive." And like Tucker Carlson before him, he justified his sweeping generalizations about boys and sexual assault by claiming that he was simply stating "how regular guys think." (Unlike Carlson, Watters at least acknowledged that rape is "psychologically damaging.") His co-panelists responded to Watters' ridiculous and dismissive views about rape by singing the chorus of "Stacy's Mom" and playfully chiding him for causing a stir.

It seems like every few days now we have some new garbage brain saying something terrible or trivializing about rape. Not to be naive here, but I seriously do not get it. After reading George Will claim -- on the pages of a national newspaper -- that rape never really happens and isn't really all that bad when it does happen, I found myself legitimately curious about what kind of a person would take such position in public. While the capacity for blatant misogyny and a disregard for sexual assault survivors displayed by politicians, pundits and garden variety shitheads has pretty much ceased to surprise me at this point (thank you for this education, tireless Internet misogynists), the conservative failure to embrace the wisdom of "stop talking about rape because people hate us when we talk about rape" is a genuine puzzler.

Sexual assault denialism has never really landed that well with the public. Todd Akin was doomed by his "legitimate rape" comment, but even if spouting similar garbage hasn't ended the careers of that many other politicians, these generally are moments that require some walking back or clarification. The "Outnumbered" panel's response to Carlson and Watters was the weak tsk-tsking, but they at least gestured to the fact that these men were being awful. Our culture may not care much about actual rape victims, but it seems to at least concede that rape as a concept is a bad thing. Come out sounding like you don't think rape is conceptually bad and people bristle.

The GOP has issued actual memos saying as much. People do not seem to like it when Republicans talk about rape as though it doesn't happen, or call it a "gift from God" when someone gets pregnant as a result of rape. Which is why it's so odd when a pundit like Will -- a reliably terrible but in that mainstream Beltway conservative way of being terrible -- or Watters -- a "man on the street" interview goon -- decides to tee up on the issue. With whom do these things resonate? What person in the world looks around, sees the low prosecution and conviction rates (to say nothing of the treatment of survivors by the justice system) and says, "I am so sick of these sexual assault victims getting all of these privileges, and I am not going to take it anymore!"