How Bill Watterson made his secret return to comics 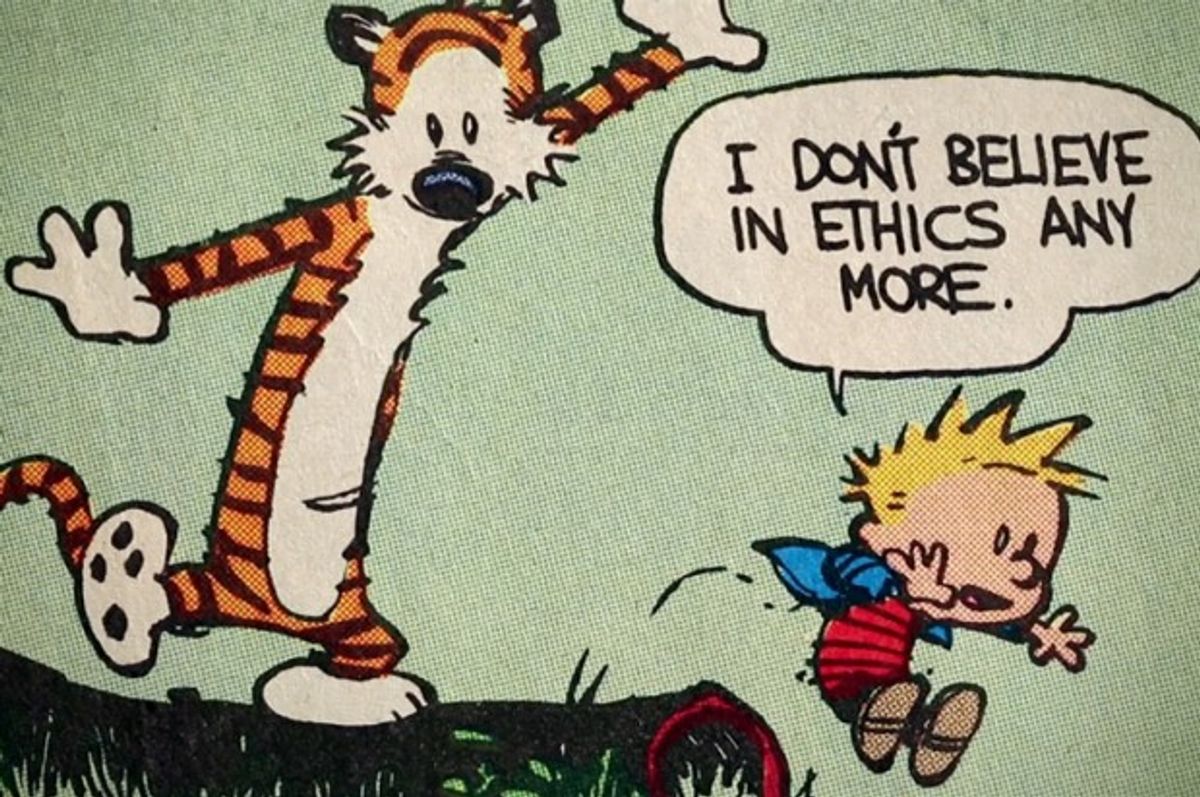 On Dec. 31, 1995, Calvin and Hobbes rode off on a sled. Nearly 19 years later, creator Bill Watterson has brought his work back to the funny pages. The best part? Millions of readers had no idea.

This week, Watterson was a secret guest artist on the comic strip Pearls Before Swine, written and illustrated by Stephan Pastis. In the series, Pastis, as a character in his own strip, meets a second-grader named Libby, who thinks Pastis draws like crap and offers to take over Pearls for a while.

Then, like one of Calvin’s fantasies, a random martian robot attack interrupts the narrative. Alligators eat the cartoonist. Libby gets bored and leaves. “There’s a magical world out there,” she says.

Fans, of course, started to get suspicious. “There are definitely some Wattersonian touches … and the complaint about the lack of space in modern comic strips that serves as the punchline sure does sound like Watterson,” Paul Constant analyzed on the Stranger Friday.

That “magical world” line is how Calvin signed off, too. Libby’s complaint about needing more space to work within reflects Watterson’s push to have his series printed in full size on Sundays. And Libby, or Lib, is “Bill” backward.

Watterson made Pastis promise not to reveal anything until the project was over. But on Monday, the younger cartoonist couldn’t help but tease something incredible. On Saturday morning, he finally revealed all on his blog.

Pastis reveals how the project came together:

I … thanked [Watterson] for all his great work and the influence he’d had on me. And never expected to get a reply.

And what do you know, he wrote back.

Let me tell you. Just getting an email from Bill Watterson is one of the most mind-blowing, surreal experiences I have ever had. Bill Watterson really exists? And he sends email? And he’s communicating with me?

But he was. And he had a great sense of humor about the strip I had done, and was very funny, and oh yeah….

…He had a comic strip idea he wanted to run by me.

Now if you had asked me the odds of Bill Watterson ever saying that line to me, I’d say it had about the same likelihood as Jimi Hendrix telling me he had a new guitar riff. And yes, I’m aware Hendrix is dead.

So I wrote back to Bill.

I will do whatever you want, including setting my hair on fire.”

And the biggest challenge with working with Watterson? To put it kindly, “technology was not his friend,” Pastis writes.

And this is when I found out that Bill Watterson is not comfortable with scanners or Photoshop or large email attachments. In fact, by the end of the process, I was left with the distinct impression that he works in a log cabin lit by whale oil and hands his finished artwork to a man on a pony.

So I proposed working out our technological issues over the phone. But he didn’t want to.

At first I thought it was because he didn’t own one. Or have electricity. But then I remembered we were emailing.

And so I soon came to the sad realization that he probably just didn’t want me to have his phone number. Which was smart. Because I would have called that man once a week for the rest of his life.

And unlike every other technological problem I’ve ever had, it was not frustrating.

It was the highlight of my career.

Take Tim Carmody’s advice and read forward from Monday. But the site GoComics was slowing down for me, possibly from all the traffic it must be getting from Pastis’s blog. So here are a few of the comics, embedded from Pastis’s Twitter.

The art will be auctioned off and donated to charity. It really is a magical world, Hobbes ol’ buddy.

This week's Pearls strips will contain a mind-blowing surprise. I promise. pic.twitter.com/bzLS9zkBdF

The second strip in this week's series. pic.twitter.com/YFHCih07tp

Day 3 in this week's series. The little girl can draw. pic.twitter.com/bfsXMLjbvq

Day 4 in this week's series: Libby just gets better and better. pic.twitter.com/lCc7kPlWvs

Day 5 in the series. So who is really drawing my comic strip? Me? A second grader? Someone else? pic.twitter.com/Klx2YT5Cso