Donna Tartt's multicultural fantasy: How "The Goldfinch" got away with its disgraceful racial politics

In the Pulitzer-winning novel, people of color read like wishful caricatures. Why isn't anyone talking about it? 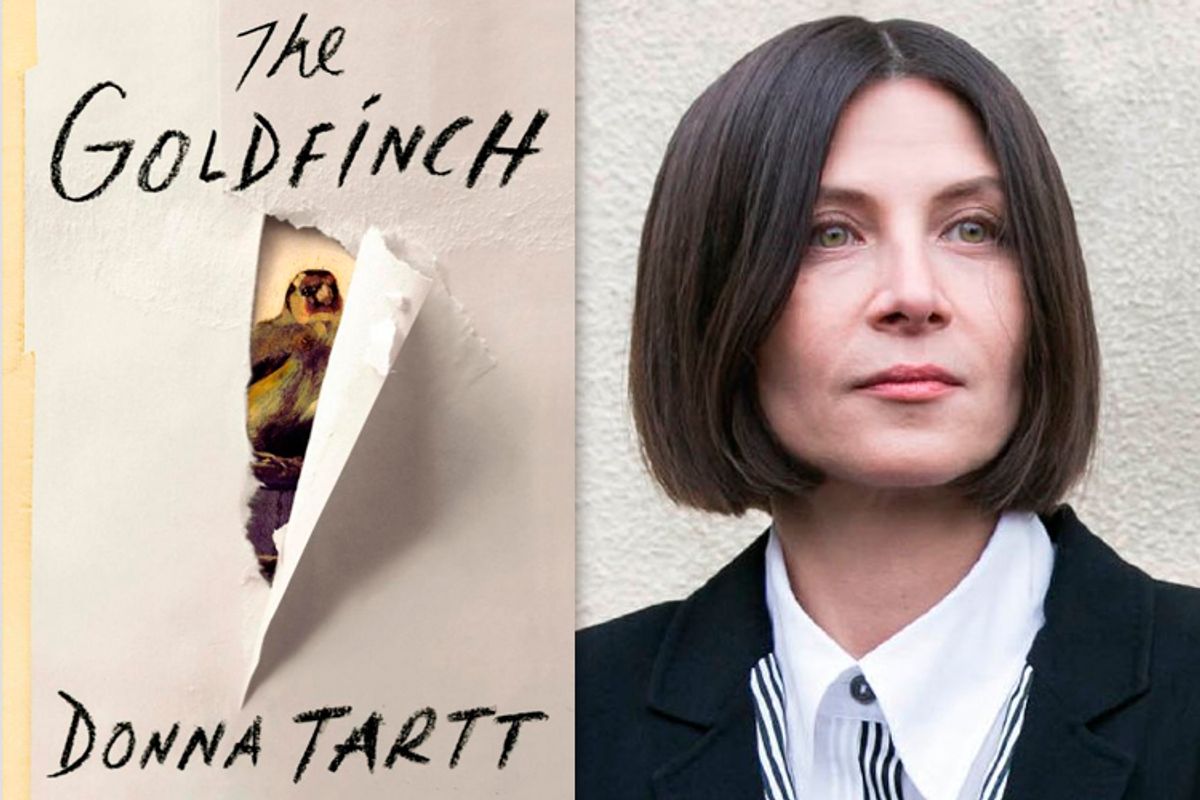 People are still talking about Donna Tartt’s best-selling, Pulitzer Prize-winning novel “The Goldfinch”; Evgenia Peretz’s new piece in Vanity Fair lays out the ongoing controversy over its literary quality.  But despite all the discussion, there’s an element of the book that’s been overlooked.  In a 771-page novel set in contemporary New York, Las Vegas and Amsterdam, almost all the characters of color are servants, and they play bit parts.

This seems to be as invisible to critics (and book-club enthusiasts) as it is naturalized in the novel.

Now, it’s a belief commonly held by the well-to-do that their domestic workers live and love to serve.  Call it the Downton Abbey fantasy: The lower classes may indeed have their own little lives and dramas, but their true emotional investment lies in Lady Mary’s happiness.

Tartt’s rosy yet flat depictions of working-class servants of color seem to partake of this fantasy, from Goldie the Puerto Rican doorman (and the other doormen:  “a big happy Dominican guy,” etc.), to Cinzia the housekeeper, who “cried, and offered to stay and work for free” when the young protagonist Theo’s mother can’t afford her services anymore, to Etta, the Barbours’ housekeeper, who “rushed to hug [Theo]:  I had the night off but I wanted to stay, I wanted to see you.”

I’ll work for free?  I had the night off but I wanted to stay?  Uh, right.  Tartt’s working-class people of color read like wishful caricatures.  Her servant characters don’t quite say, “You is kind.  You is smart.  You is important,” as in "The Help," but they come close.  In contrast, all characters of importance in the novel -- the ones with meaty speaking roles or any complexity -- are white.

Why would a novel set primarily in New York and Las Vegas exclude people of color from any roles that aren’t working-class servitude?  (That is, aside from “the Korean lady” and “Enrique,” two insensitive and inept social workers who mispronounce Theo’s name after his mother’s death, and “the Chinese kid” who plays a role in the book’s cartoonish crime-novel climax.)  When characters of color do appear, they function, not in the fullness of their humanity, but merely to revolve around the well-off white characters they serve.

It’s an odd omission in a book that is, in other ways, so careful.  Layered, amusing and often artfully crafted at the sentence level, “The Goldfinch” explicitly favors the old over the new, the real over the fake, the lost or carefully preserved work of art over the easily accessible commodity.  It values the odd and fine-grained over manufactured polish; it loves (and wants us to love) quirky, damaged Pippa instead of picture-perfect blond Kitsey.  For many people -- especially the sort who commit to hefty novels -- its sensibility is easy to like.  It’s an elegiac novel, with a series of lost mothers at its core and a lament for the passing of old ways at its heart (Old Masters, the old country, the faithful craft of artisans).  In “The Goldfinch’s" neat sets of binaries, New York -- with its beautiful old architecture and museums -- easily trumps Las Vegas, with its gaudy imitation icons, junk food and miles of tract housing.

So when Theo, our bereft protagonist, unwraps what he has believed (for years) to be the stolen painting “The Goldfinch” (the numinous MacGuffin that drives the action of the book, representing for Theo his dead mother and redolent of all Old-World art and culture) but which is actually a faked package with which light-fingered Boris has pulled the old switcheroo, I knew that what lay inside the wrapping mattered.  It mattered to Theo.  It mattered to Tartt.  In the ideological structure of her novel, whatever lay inside that wrapping represented the cheap, fake substitute for what was good and true and real -- the beloved, the dear, the irreplaceable. Whatever lay inside was the linchpin of Tartt’s symbol system:  the precise negative of the delicate, precious Old Master painting enshrined on the cover, in the title, and within the novel’s plot.

So I read with a sinking feeling, in Theo’s voice, of:

a snarl of packing tape into which I’d cut, painstakingly, with an X-Acto knife, twenty minutes of delicate work, pulse throbbing in my fingertips, terrified of going in too hard and nicking the painting by mistake, finally getting the side open, peeling the tape strip by strip by careful strip, with trembling hands:  only to find--sandwiched in cardboard and wrapped with newspaper--a scribbled-up Civics workbook (Democracy, Diversity, and You!).

Bright multicultural throng.  On the cover Asian kids, Latino kids, African American kids, Native American kids, a girl in a Muslim head scarf and a white kid in a wheelchair smiled and held hands before an American flag.  Inside,...the book’s cheery dull world of good citizenship, where persons of different ethnicities all participated happily in their communities and inner-city kids stood around their housing project with a watering can, caring for a potted tree...

As the author, Tartt could have placed nearly anything inside that muddle of tape and newspaper and cardboard. Yet this is what she chose, and so herein lies the great betrayal, the worthless substitute for all that has been stolen from Theo:  a multiculturalism depicted as facile, a didactic, banal, tokenized vision of compulsory equality and justice.  Gone is “The Goldfinch,” and with it the beloved lost hierarchical world of Beauty and Art and Culture (and dark people, presumably, in their places where they belong, serving).

This is the unremarked core of the novel, our newest winner of the Pulitzer Prize. This is its own troubling heart of racial/class anxiety to which the glowing reviews (and scathing critiques) have largely been blind.

Perhaps these two kinds of moments in the book (the one-dimensional, eager servants of color; the big reveal of the “cheery dull world” of racial harmony where wondrous Art should be) are not deliberately hostile, not Tartt’s reaction to the future posed by rapidly shifting U.S. demographics. Perhaps the book is not evidence of a nostalgic raced/classed fantasy.  Maybe Tartt’s choices along raced/classed lines are not angry.  (When writers of color write nakedly and directly about the real-life results of erasure, negation and stereotyping, we are often called angry.  I think of Gloria Anzaldúa, for example, or bell hooks.  When white writers erase, diminish, typecast and pigeonhole people of color, few commentators take note.)

Perhaps Tartt’s eager servants and banal multicultural textbook are simply omissions, blind spots, failures of vision and craft, the result of an imagination expansive in some ways yet cramped in others.  Such flaws are, in the history of decorated literature, not uncommon.

Whatever the significance of Tartt’s choices, they haven’t yet been thrashed out on a cultural level, because the book’s many supporters and critics haven’t been interested in discussing this aspect.

What does it say about contemporary U.S. culture and letters that “The Goldfinch” has earned wild marketplace success, won critical acclaim, and stirred significant discussion while its race/class politics have gone unremarked?

A version of this essay appeared on Joy Castro's blog.