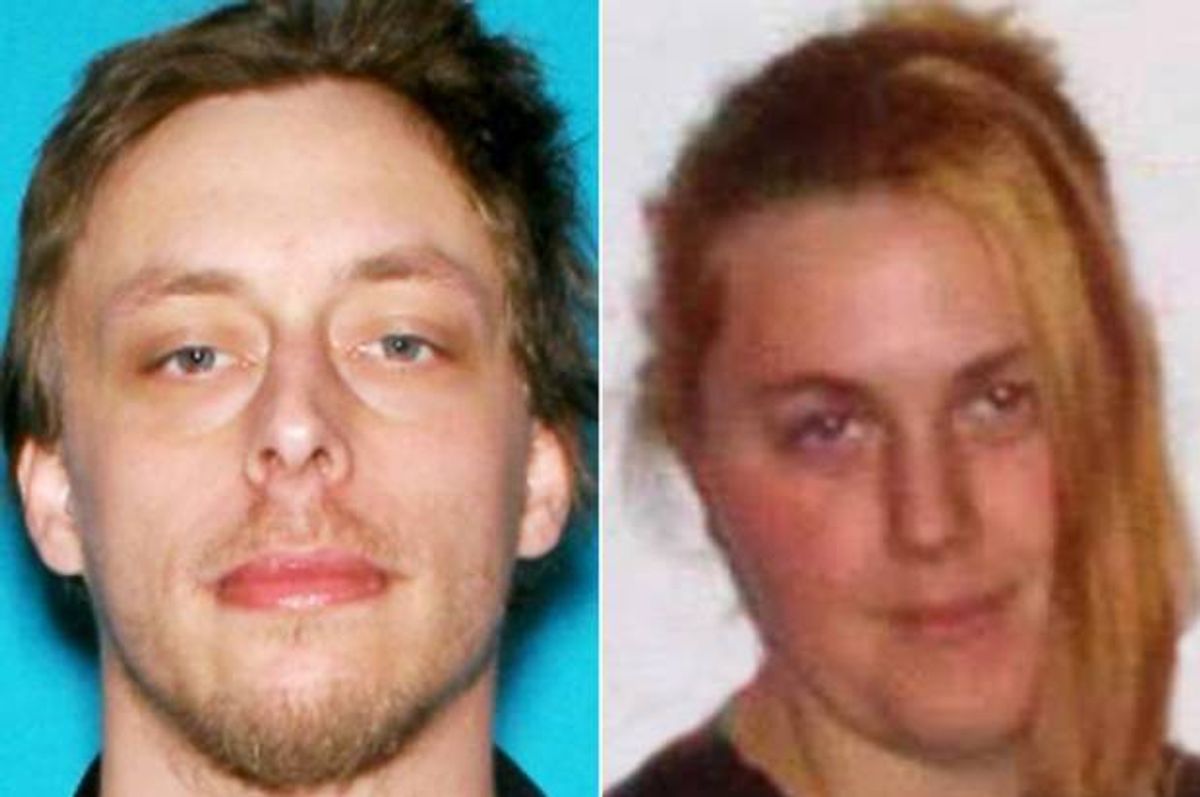 If there's one thing you'd think we could all agree on, it'd be that a crazed gun nut who moved to Nevada to join the standoff at Bundy ranch and wrote screeds on the Internet blaming the government for every problem in his life could be identified as a man of the right. But according to Cliff Kincaid of the right-wing dinosaur media watchdog, the ironically named Accuracy in Media, the Las Vegas shooters, Jerad Miller and his wife, Amanda, were somehow left-wing radicals who shot police officers as some sort of a protest against marijuana prohibition.

Kincaid's piece is in response to an article by Jon Avlon in the Daily Beast in which Avlon lays out all the ways in which the Millers were influenced by far-right militia and white supremacy rhetoric. The list is substantial. But Kincaid notices something amiss. You see, Avlon fails to note that Miller was a pot smoker who was also angry at the government for jailing him on drug charges. And that's true, at least in part. Miller's hatred for government was informed by his brush with the law on drug charges. But Kincaid fails to note that what seemed to really bother him about that was the fact that his felony conviction made it impossible for him to legally own guns.

But let's examine the rhetoric he used to convey his "philosophy" (if you could call it that):

I will be supporting Clive Bundy and his family from Federal Government slaughter. This is the next Waco! His ranch is under siege right now! The federal gov is stealing his cattle! Arresting his family and beating on them! We must do something, I will be doing something.

If Bundy and his pals in the militia were out there in the Nevada desert fighting off the Bureau of Land Management over marijuana, it's quite a scoop. Those are all the usual right-wing talking points about the standoff. In the L.A. Times, Amanda Miller's father characterized Miller by saying "he was was into all this Patriot Nation and conspiracy theory stuff," which is not normally how one would describe marijuana legalization activism.

Kincaid homes in on Miller's affinity for Alex Jones, the conspiracy theorist, who also, as it happens, rails against the drug war. In Kincaid's mind that closes the case, however, he seems not to know that Alex Jones calls himself a libertarian and a conservative whose anti-government beliefs are so extreme that he believes both 9/11 and Oklahoma City are government conspiracies as was the Newtown massacre. His most famous public appearance was on CNN in defense of gun rights:

"I'm here to tell you, 1776 will commence again if you try to take our firearms! Doesn't matter how many lemmings you get out there on the street, begging for 'em to have their guns taken. We will not relinquish them. Do you understand?! That's why you're going to fail, and the establishment knows, no matter how much propaganda, the republic will rise again!"

So yes, it's possible that the combination of far-right rhetoric along with a libertarian desire to end the drug war attracted Miller to Jones, but it's pretty clear that it was the guns that bound them to each other most strongly.

Kincaid proves, if nothing else has, that he is seriously out of touch with his own movement:

The paper said that Garry Frick, the owner of a bookstore, got caught in a short but dramatic debate with Jerad Miller, in which the pothead “covered everything from Bundy to the Declaration of Independence to the morality of pornography, guns and drugs in a span of less than 15 minutes. He kept misquoting things and incorrectly using words, Frick said, all the while sounding very sure of himself.”

It sounds like marijuana took its psychological toll on him.

If "misquoting things and incorrectly using words all the while sounding very sure of himself" is a sign of marijuana-induced psychological problems, the entire right wing of this country is a very dedicated bunch of potheads.

The fact is that  marijuana is actually known to have a sedative effect and calm violent tendencies rather than exacerbate them. A recent study by the University of Texas showed that marijuana use in itself not only doesn't contribute to violent crime, it may reduce it:

It actually may be related to reductions in certain types of crime, said Dr. Robert Morris, associate professor of criminology and lead author of the study published in the journal PLOS ONE.

“We’re cautious about saying, ‘Medical marijuana laws definitely reduce homicide.’ That’s not what we’re saying,” Morris said. “The main finding is that we found no increase in crime rates resulting from medical marijuana legalization. In fact, we found some evidence of decreasing rates of some types of violent crime, namely homicide and assault.”

On the other hand, we have ample evidence that this fetish for guns in our culture is killing people in large numbers. This survey from the Harvard School of Public Health shows:

Our review of the academic literature found that a broad array of evidence indicates that gun availability is a risk factor for homicide, both in the United States and across high-income countries. Case-control studies, ecological time-series and cross-sectional studies indicate that in homes, cities, states and regions in the US, where there are more guns, both men and women are at higher risk for homicide, particularly firearm homicide.

Let's put it this way: Even if Jerad Miller and his wife really were very, very, very angry about the prohibition against marijuana in America, and even if getting high made them aggressive in some abnormal way, if they didn't also have a stash of weapons these two potheads would probably be knee deep in a pile of empty Cheetos bags yelling at the TV today instead of lying dead alongside their victims.