The sun is currently at the maximum stage of its solar cycle, and a coronal mass ejection may be headed our way 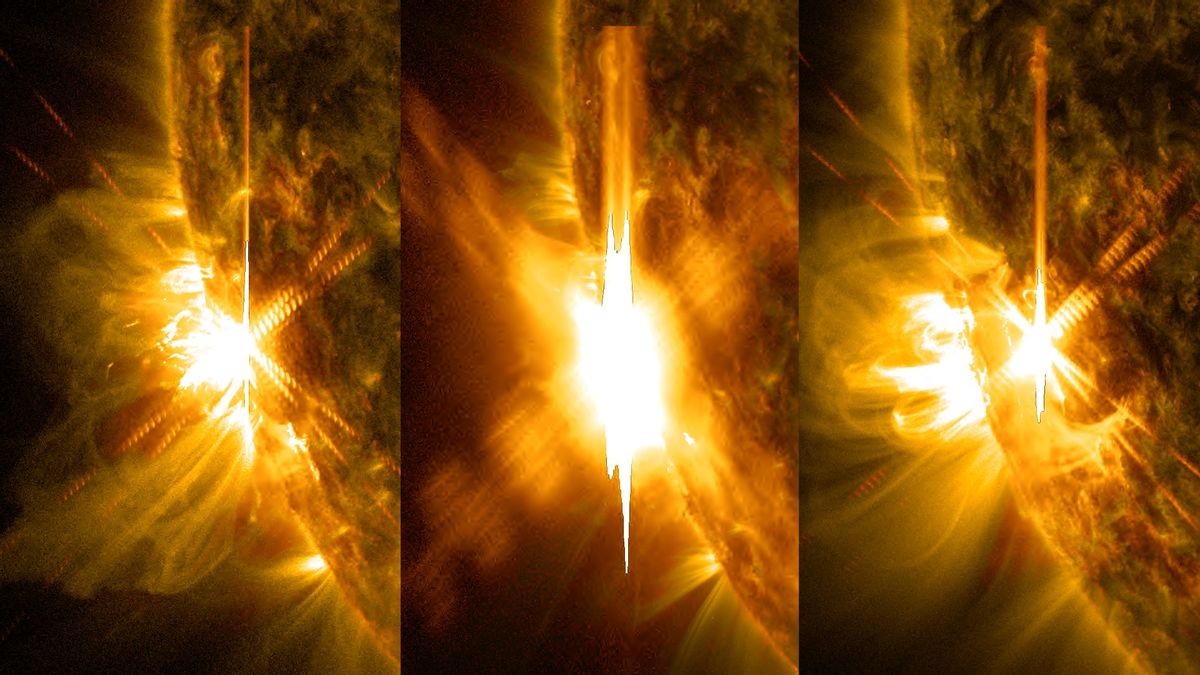 Earlier this week, the sun's surface erupted in a series of solar flares. These solar events produced stunning photos, and according to ABC News, disrupted some high frequency communication -- and still could today, Friday the 13th.

Let's start at the beginning. What is a solar flare?

"A flare is defined as a sudden, rapid, and intense variation in brightness," according to NASA, and flares occur "when magnetic energy that has built up in the solar atmosphere is suddenly released." Solar flares extend out of the outermost layer of the sun's atmosphere -- the corona.

Radiation from a flare is made up of nearly the entire range of electromagnetic waves, from the long to the short -- radio waves, optical, x-rays and gamma rays -- explains NASA.

This energy is the "equivalent of millions of 100-megaton hydrogen bombs" blowing up simultaneously, or 1027 ergs per second, for a typical flare and 1032 ergs for a large one. And though this amount of energy seems huge -- NASA describes it as is one million times greater than a volcanic eruption -- it is just a fraction (less than one tenth) of what the sun releases every second.

Why and when do solar flares even happen?

"As the magnetic energy is being released, particles, including electrons, protons, and heavy nuclei, are heated and accelerated in the solar atmosphere," NASA writes, causing the flare seen in the above photographs.

The sun has a solar cycle, which is around 11 years, and the level of magnetic energy that comes up to the surface of the sun depends on where the sun is in its cycle. The number of solar flares increase when the sun reaches the maximum of its cycle. so does the occurrence of sunspots.

The sun is currently in an "active" phase of it's cycle. Though NASA officials are saying it is a much weaker maximum phase than past solar cycles, and according to Space.com, they've dubbed it "mini max."

What do solar flares mean for Earth?

Well for one they mean a more visible aurora borealis, or northern lights, but they also send a rain of radiation on the Earth's atmosphere and can cause communication issues.

The recent flares happened once on Tuesday, and twice on Wednesday between 7:00 a.m. and 9:00 a.m. EDT, and their effects were felt in high frequency communications, according to ABC News and the National Oceanic and Atmospheric Administration (NOAA). The videos below explain:

This coronal mass ejection may come in contact with Earth today, Friday, June 13, according to both ABC News and Space.com, who spoke to officials at NOAA and Spaceweather.com respectively. Salon, has independently reached out to NOAA for more information and will update accordingly.

If this blast of plasma does brush Earth, the effect of this is potentially a minor geo-magnetic storm, and communication issues, according to ABC News. Currently NOAA's Space Weather Prediction Center, has a monitor for space weather showing potential for radio disruptions.