Human-on-dolphin sex is not really that weird

Margaret Howe Lovatt was attacked for admitting that she stimulated a dolphin. But what she did isn't that unusual 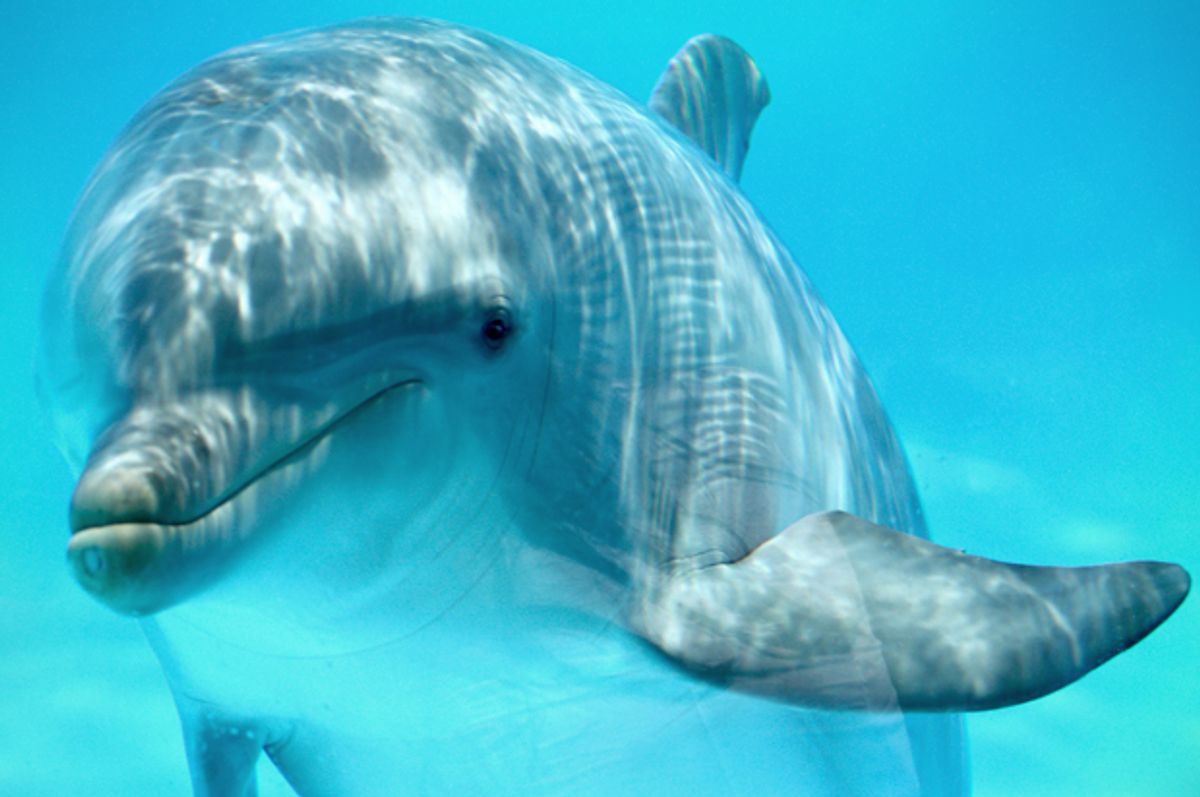 It is safe to say that Margaret Howe Lovatt will from here on out be known as the woman who had “sex” with a dolphin.

This week, the media went nuts over revelations in a BBC documentary about Lovatt's interactions with a male dolphin during a NASA-funded experiment in the 1960s. “He would rub himself on my knee, my foot or my hand and I allowed that,” she said. "I wasn't uncomfortable, as long as it wasn't too rough. It was just easier to incorporate that and let it happen." Eventually, it became routine. "It would just become part of what was going on, like an itch, just get rid of that scratch and we would be done and move on,” she said. During the segment, a narrator intones, "Margaret felt the best way of focusing his mind back on the lessons was to relieve his desires herself, manually." She makes sure to clarify: "It was sexual on his part, it was not sexual on mine -- sensual perhaps."

Then came the headlines. "Woman reveals sex with dolphin." "The woman who lived in sin with a dolphin." "The dolphin who loved me." "This Woman Jerked Off A Dolphin -- And Liked It!" "Scientist Says Relationship With Dolphin Was 'Sensuous.'" "Woman waxes poetic about giving precious, sensual hand-jobs to a dolphin." "'I had a sexual relationship with a dolphin'" (despite the quotes, she never actually said that).

Judging from the collective horrified response, you would think that a human giving a handy to an animal was an aberrant, unthinkable act. But such fondling isn't unheard of in the realm of animal research.

There are two major published examples. The first: In 1970, anthropologist Francis Burton published "Sexual Climax in female Macaca mulatta." She wanted to answer the question of whether female monkeys experienced orgasm. Burton placed the primates in dog harnesses and cat collars to restrict their movement. Then the researcher put a “penis-simulator” into “the animal's vagina with vaseline as lubricant,” and moved it at a pace of two to five thrusts a second. Burton wasn’t able to definitively conclude that female monkeys could orgasm, but she did identify an excitement, plateau and resolution phase, as Masters and Johnson had identified in humans.

“I think in the field it is generally thought that a similar study would never get through an institutional animal use and care committee,” says Kim Wallen, a psychology professor at Emory University who specializes in primate sexual behavior.

The second case is that of psychologist Frank Beach and his research on beagles in the '80s. “Most of the work he did was behavioral, looking at the effects of prenatal androgens on sexual differentiation, but some of his treated animals were unable to copulate and he wanted to know if they showed normal genital reflexes, even though they did not copulate,” says Wallen. So, he masturbated the dogs and observed their responses.

There are more recent, although also less formal, examples. In Daniel Bergner’s “What Do Women Want?,” he details a demonstration made by a graduate student of researcher Jim Pfaus:

The student picked up a female rat and, with a tiny brush, stroked the clitoris, which protruded from the genitalia like a little eraser head. She stroked a few times, then put the animal back down in her cage. Swiftly the creature poked her nose out of the open door. She clamped her teeth on the white sleeve of the student’s lab coat and tugged the woman’s hand inside the cage. The student brushed the rat’s clitoris again, set her down again. And again the rodent bit into the sleeve, pulling, communicating unmistakably what she craved. This went on and on and on.

In the field of sex work, these are exceptional cases. Truth is, these hands-on techniques have a far more common, everyday application: the breeding of animals. How else do you think semen samples are collected? Manual stimulation is the most common way, according to "The Encyclopedia of Animal Science." Elephant semen is collected with the help of a hand shoved up their rear to stimulate their prostate. Should you wish to see it, there are YouTube videos available of a trainer at Sea World masturbating a killer whale's enormous pink schlong, a man getting handsy with an echidna's four-headed penis, a dog being jerked off by a prim-looking middle-aged woman -- and so many others. It's like the Noah's Ark of human-animal hand jobs. These cases don't make headlines -- but allowing a dolphin to hump your foot until he ejaculates does.