James Joyce's lyrical, sensual literary legacy: Why so many novels steal from "Ulysses"

From Pat Conroy to Richard Russo, mainstream contemporary fiction would not exist without Joyce's novel 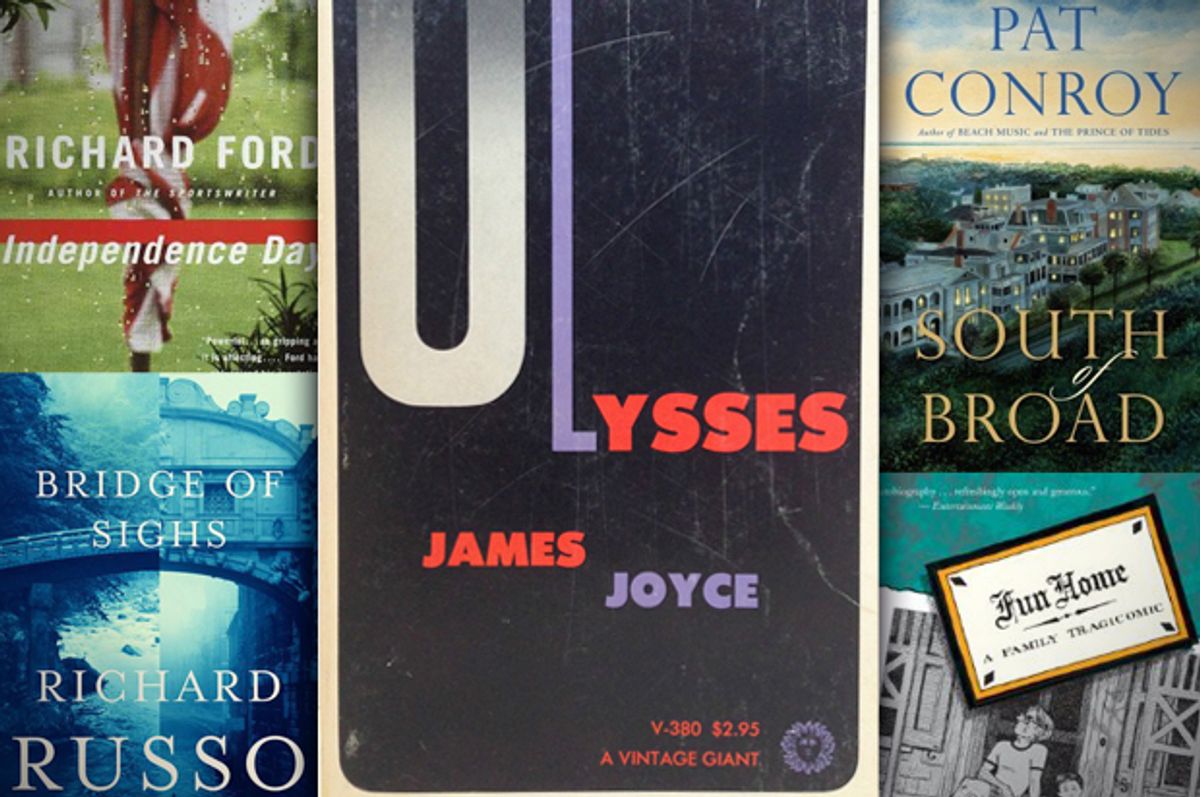 In the “Wandering Rocks” episode of "Ulysses," Tom Kernan and Leopold Bloom discuss the explosion of the passenger steamboat General Slocum in New York’s East River that happened the previous day -- the greatest loss of life to occur in New York prior to 9/11. Referring to the ineffective lifeboats and fire hoses and the panicked trampling of passengers on the steamboat, Kernan states, “And America they say is the land of the free. I thought we were bad here.” To which Bloom responds, “America ... What is it? The sweepings of every country including our own. Isn’t that true? That’s a fact.”

Joyce, and particularly "Ulysses," continue to influence the distinctive hodgepodge that is American popular fiction and culture in massive, invisible ways. Garrison Keillor’s "A Prairie Home Companion" has an episode in its recurring "Lives of the Cowboys" spoof where special guest Martin Sheen plays James Joyce in a gunfight with Clint Eastwood. While English and Irish rock musicians, notably Kate Bush’s “The Sensual World” and the Clash’s “Jimmy Jazz,” pay homage to Joyce and his works, one can hear the popular New Orleans-style jazz band, Ulysses, Saturday nights at the James Joyce pub in Santa Barbara, California. While Van Morrison croons “Been too long in exile/ Just like James Joyce, Baby” in “Too Long in Exile,” Jimmy Buffet sings, “My life’s an open book/By James Joyce and Agatha Christie” in “If It All Falls Down.”

It took Kate Bush 20 years to get permission from the James Joyce estate to use lines from the conclusion of "Ulysses" in her song “The Sensual World,” renamed “Flower of the Mountain,” a phrase from Molly Bloom’s soliloquy, in its 2011 release. Joyce’s work recently passed out of copyright, ending the estate’s tyrannical reign over permissions.  Bush told one concert audience, “The song was saying ‘Yes, Yes’ and when I asked for permission they said ‘No! No!’” Likewise, American biologist Craig Venter, who created the first cell with a synthetic genome in 2010, received a cease and desist letter from the Joyce estate when he encoded watermarks into his new cells including “To live, to err, to fall, to triumph, to recreate life out of life” from "A Portrait of the Artist as a Young Man. "

Most of the critical attention regarding the persistence of Joyce in American fiction has been in the realm of the stylistic experimentation of a William Faulkner or Thomas Wolfe, the encyclopedic sweep of a Thomas Pynchon or William Gaddis, or the wholesale rewriting of "The Dead" by Joyce Carol Oates. Joyce ghosts the pages of so much experimental fiction subsequent to him, its complexities full of both the anxiety of influence and the influence of anxiety. Whether the Wakean or Molly-like stylistic tour de force of asynchronous images, neologisms and tumbling run-on sentences or the plotted allusion like Denis Johnson’s 2007 Vietnam novel, "Tree of Smoke," where we see a horrific Christmas dinner scene reminiscent of "A Portrait," formal play inevitably owes a debt to Joyce. We love our technical innovations, whether encased in metal or folded within the pages of our prose.

We see several examples of recent American novels that give explicit nods to "Ulysses" while relying on traditional narrative storytelling concerned primarily with exploring the moral fiber of their well-defined characters. These novels are both popular as given testimony by their status on the New York Times bestseller list and are what Jonathan Franzen would refer to as “substantive,” based on mainstream critical attention in venues such as the New York Times, New Yorker and New York Review of Books. And a huge number of these books nod and wink toward, if not explicitly invoke, the shape and central characters of Joyce’s masterpiece.

The narrator of Richard Russo’s 2007 novel "Bridge of Sighs," Lou Lynch, is patently Bloomian and he initially proclaims the memoir we are about to read might be called “The Dullest Story Ever Told.” In Lynch, Bloom the early 20th century Dublin ad canvasser has become the owner of convenience and video rental stores and an ice-cream shop in Thomaston, New York, near Albany.  Like Bloom, he spends his time observing and embracing the ordinary, plodding through his life and daydreaming about what might have been and what might be.

Like Bloom, he has lost a child and, like Bloom, he is devoted to his wife, Sarah, whose sexual attention strays Molly-like. At one point, Russo reminds us we always are “moving through space, yes, but also through time, meeting ourselves,” invoking Stephen’s theorizing in the “Scylla and Charybdis” episode of "Ulysses" (“We walk through ourselves, meeting robbers, ghosts, giants, old men, young men, wives, widows, brothers-in-love, but always meeting ourselves”) without attribution. Stephen figures in the character of Bobby Marconi who has fled the emotional and intellectual constraints of Thomaston to live in the Venice of the novel’s title and develop his artistic gift. A kind of love triangle emerges between the three characters, Lynch and Sarah’s affection for Bobby driven in part by their envy of his having escaped Thomaston. At the same time, it is Bobby who undergoes the Icarean crash while Lynch’s endurance and equanimity earn Russo’s approval.

Richard Ford’s Frank Bascombe trilogy often has been compared to John Updike’s "Rabbit" novels, but the Bloomian connections hover. Ford’s trilogy, "The Sportswriter," "Independence Day" and "The Lay of the Land," spans 20 years in the New Jersey suburbs with Bascombe, first a sportswriter and then a real estate agent, puzzling through the mundane ups and downs of his life. In "The Lay of the Land," published in 2006 but set during Thanksgiving 2000 while Bush v. Gore is being decided, we find him abandoned by his second wife for her first husband, presumed dead for many years but now revealed to have been living surreptitiously in Scotland, and trying to demonstrate his love for his deeply troubled adult son who is employed writing card copy for Hallmark. While the nation’s future rests on a Supreme Court decision, much of the novel’s interior action occurs in Frank’s car as he ponders his outsider status as a Southern Democrat residing in a Northern Republican town, his wife’s departure, and his recent diagnosis of prostate cancer. The death of his son in childhood, like Bloom’s Rudy, haunts all three novels and the inevitability of Bascombe’s own impending end surfaces throughout this concluding one.

Pat Conroy’s 2009 novel, "South of Broad," is set mainly in Charleston, South Carolina. His narrator is Leopold Bloom King, the son of a Joyce scholar. The novel is framed by Bloomsdays: June 16, 1969, when Leo is 18 and a newspaper delivery boy, and 20 years later in 1989 when he is a newspaper columnist about Bloom’s age. Leo’s older brother, Stephen Dedalus King, is a suicide found by Leo when he is only 8. The death initially sends Leo to a mental institution and then steers him toward other damaged psyches, particularly the Molly of this novel, Sheba Poe, who grows up to become a Hollywood sex symbol before she is brutally murdered by her evil father who previously threatens Leo with a knife to his throat while intoning lines from Joyce.

Leo refers to "Ulysses" as “the worst book ever written by anyone”: “June 16 was the endless day when Leopold Bloom makes his nervous Nellie way, stopping at bars and consorting with whores and then returning home to his horny wife, Molly, who has a final soliloquy that goes on for what seemed like six thousand pages when my mother force-fed me the book in tenth grade. Joyce-nuts like my mother consider June 16 to be a consecrated mythical day in the Gregorian calendar. She bristled with uncontrollable fury when I threw the book out the window after I had finished it following an agonizing six months of unpleasurable reading.”

Ultimately, Leo’s passages through the trials and travails of his friends and family lead him to tame his own inner demons and to an acceptance of the immortality of Bloomsday, the fated day on which the characters of this touching but overwrought novel initially are intertwined.  "South of Broad" concludes, “and all of us can serve as witnesses that anything can happen during a Bloomsday Summer. Yes, that is it: anything can happen. Yes.”

Then there was Alison Bechdel’s 2006 graphic novel, "Fun Home: A Family Tragicomic," both a coming-of-age and coming-out work. In it, her closeted, suicidal and emotionally distant father is depicted as Daedalus for his obsessive home restoration project. He is an English teacher and funeral director, and the “fun” home of the title is both short for “funeral” and an ironic comment on the family dysfunction within the house. Her father’s favorite book is "Ulysses" and the English professor with whom Bechdel later studies the novel while pursuing her own sexual odyssey is drawn to look like Joyce. When her father comes out to her, she describes the scene as “like fatherless Stephen and sonless Bloom having their equivocal late night cocoa at 9 Eccles Street.”

While "Ulysses" is far from the first example of moral fiction in the history of literature and its critical reception often has tended to focus on its explosion of the boundaries of traditional narrative technique as well as its cultural and historical contexts, its persistent presence in traditional plot and character within some recent mainstream American fiction presents another layer of its compelling influence on the ever-widening circle of Joyce’s heirs. "Ulysses" is indelibly embedded in contemporary American cultural expressions. Our current literary everymen shuffle along their confused and revelatory paths while tipping their hats to Bloom.