Off with their heads! Eric Cantor, the Tea Party guillotine, and the certainty of conservative sell-out

Cantor's just the latest: From Reagan to Rove, the GOP's driven ever-rightward by clash of idealism and betrayal 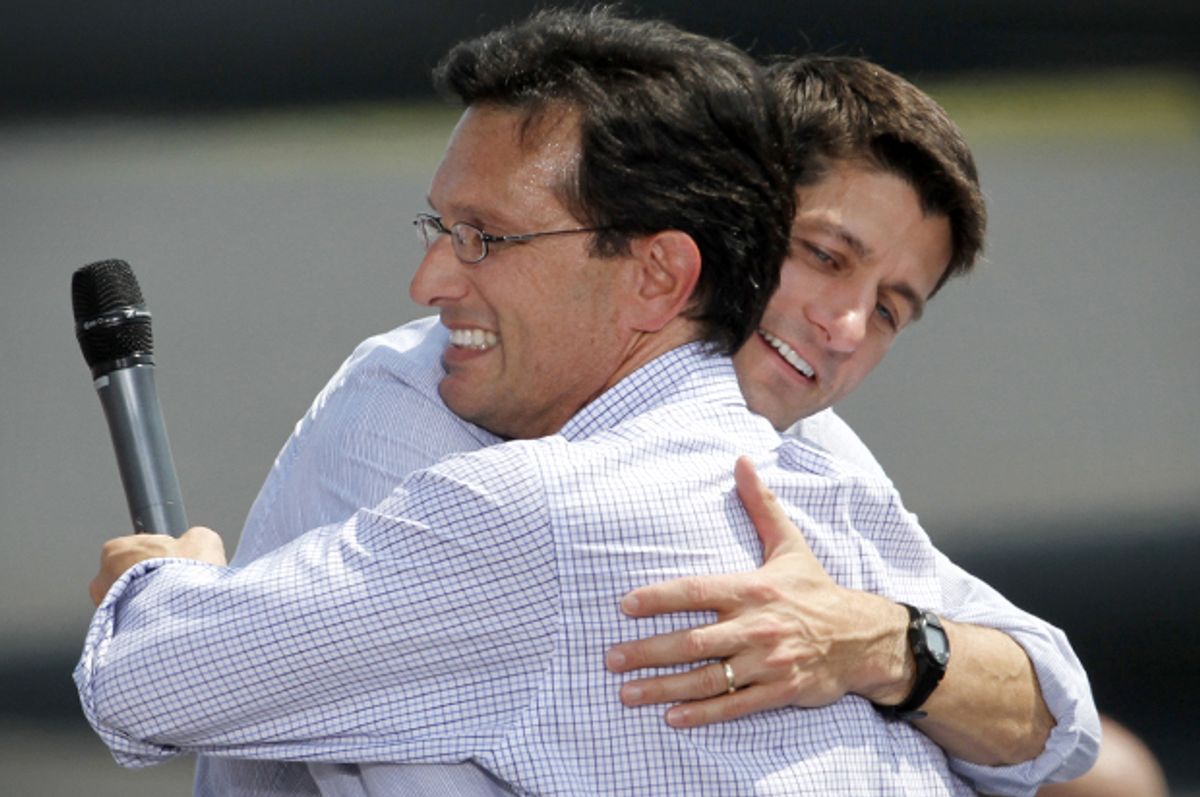 “We got what we had coming,” wrote Rep. Eric Cantor in his book "Young Guns" in 2010. He was referring to the drubbing his party took in the 2006 Congressional elections.

Back in 1994, he reminded readers, his fellow Republicans had taken control of Congress on a platform of high idealism. Once in power, however, “too often they left these principles behind.” The Republicans in that Congress, Cantor continued, “became what they had campaigned against: arrogant and out of touch. There were important exceptions, but the GOP legislative agenda became primarily about Republican members themselves, not the greater cause.”

Given what happened to Cantor himself last week — shot down in a Republican primary by an even younger gun promising an even more zealous dedication to free-market ideals — these passages seem highly ironic and more than a little bit prophetic.

In truth, however, both Cantor’s attitude circa 2010 and his sudden downfall last week were part of a long-running and basically unchanging Republican melodrama. The clash of idealism and sellout are how conservatives always perceive their movement, and what happened to Eric Cantor is a slightly more spectacular version of what often happens to GOP brass. That right-wing leaders are seduced by Washington D.C., and that they will inevitably betray the market-minded rank-and-file, are fixed ideas in the Republican mind, certainties as definite as are its convictions that tax cuts will cure any economic problem and that liberals are soft on whoever the national enemy happens to be.

And so the movement advances along its rightward course not directly but by a looping cycle of sincerity and sellout in which the radicals of yesterday always turn out to be the turncoats of today; off to the guillotine they are sent as some new and always more righteous generation rises up in their place.

It is the logic of the French Revolution, only nowadays these cycles of idealism followed by betrayal (and then by idealism again) drag us always in a reactionary direction. The New Right in the 1970s dismissed Nixon-era Republicans as squishes and called for a startling form of conservative purity. The principled president they made possible, Ronald Reagan, had only been in office a few years before conservatives were asking “Why the Reagan Revolution Failed,” to quote the subtitle of a popular 1986 book.

Reagan’s designated successor, George H. W. Bush, bravely challenged the world to read his lips and disappointed the faithful even faster. A few years later the idealistic Freshmen of 1994 arrived on the Washington stage, shaking their fists at the mighty; after a few noble years of shutdowns and defundings and even a bit of impeaching, they too were dismissed as compromisers, this time after one of the greatest outbreaks of corruption the city has ever seen and for which the grinning mug shot of their one-time hero Tom DeLay will stand forever as a symbol. And let us not overlook George W. Bush, the prayerful leader of a triumphant conservative movement a mere 10 years ago; today he is regarded on the right as an impostor if not some kind of closet liberal. Ditto Karl Rove. Ditto Newt Gingrich. Ditto even Grover Norquist, in some circles.

Then came the Tea Party, dedicated to building a republic of economic virtue and determined to liquidate a host of Republican deviationists; its one-time hero Eric Cantor swiftly became its victim, carted off in a tumbril to meet the fate of Danton. He got what he had coming, as he himself said of the previous generation of faded radicals.

What is it about this pattern that makes it so perfect for modern conservatism? Part of the explanation, as I argued in my book "The Wrecking Crew," is simple expediency: Ronald Reagan was a sellout when his poll numbers were bad and an ideological hero when they recovered. George W. Bush may or may not have abandoned his principles (whatever they were), but there is no doubt that he was a lousy president, launching a catastrophic war and staring stupidly in the wrong direction while hurricanes chewed up Louisiana and a real-estate bubble wrecked the global economy. Such a loser could not possibly have been a real conservative.

But there is also something greater in this eternal progression of authenticity and fakeness than sheer opportunism: Sometimes the acts of betrayal that obsess the right really do seem to happen. Consider the case of Eric Cantor. The specific object of his idealistic passion, back in his bang-bang Young Gun days, was small business, which he hailed in glowing terms as the soul of the free-market order and the very opposite of the hated Wall Street bailouts. This was, of course, typical populist posturing of the period. Also typical was the direction Cantor took in reality, becoming such a staunch defender of big business and Wall Street that the stock market actually swooned on news of his defeat.

The man who beat Cantor, a college economics professor named David Brat, simply called him on this blatant reversal. Brat’s shoestring campaign was a market-populist crusade, an uprising against “crony capitalism” and its flesh-and-blood representative, Eric Cantor, friend of the Chamber of Commerce. “All the investment banks up in New York and D.C., those guys should’ve gone to jail,” this guy Brat said at one particularly inspired moment. “Instead of going to jail, where’d they go? They went onto Eric’s Rolodex.” Even his stance on immigration was meant as a shot at the tech companies who will benefit in a lopsided way from immigration reform.

Why is it that Republicans are uniquely prone to this cycle of idealism and betrayal? I think the answer is simple: Because free-market idealism is a philosophy that automatically leads to betrayal—and also to misgovernment, and cronyism, and even corruption, as we saw in the DeLay era. The movement’s greatest idealists often turn out to be its greatest scoundrels—think of Jack Abramoff, or of Oliver North, or (as Rick Perlstein has pointed out) the gang of hard-right purists who signed up to do dirty tricks for Richard Nixon. In truth, there seems to be no real contradiction between conservative morality and following the money; to be a capitalist true-believer is to sell yourself.

Free-market idealism, after all, is about applying market forces to the state. This is what everything from Citizens United to toll-road privatization is all about. To be true to such a principle means respecting incentives, answering the call of money. And it ain’t small business who has the money in Washington these days.

A number of years ago I wrote about the market-minded men of the Bush era who did the bidding of lobbyists and who filled the federal agencies with hacks and fools, and I think my verdict on them still applies: “They did not do these awful things because they were bad conservatives; they did them because they were good conservatives, because these unsavory deeds followed naturally from the core doctrines of the conservative tradition.”

So the cycle goes on, uprising after uprising, an eternal populist revolt against leaders who never produce and problems that never get solved. Somehow, the free-market utopia that all the primary voters believe in never arrives, no matter how many privatizations and tax cuts the Republicans try. And so they seek out someone even purer, someone even more fanatical. They drag the country into another debt-ceiling fight, and this time, they say, they really mean it! But what never occurs to them is that maybe it’s their ideals themselves that are the problem.