Faith and reason have fought over creation for centuries. Now science is closer than ever to cracking the code 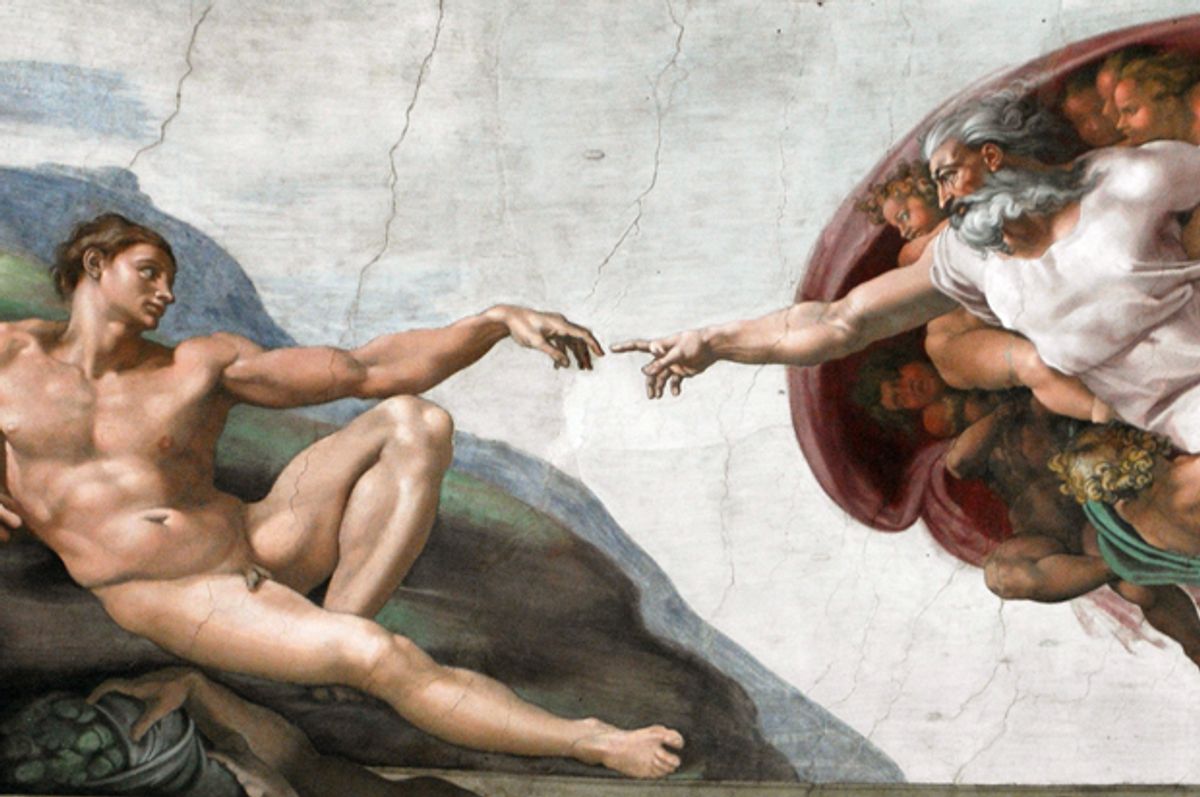 Excerpted from The Serpent’s Promise: The Bible Interpreted Through Modern Science"

It began not with a word, but a bang. That statement is as ambiguous as any in the Bible. The Psalms are confident about what happened; the universe was the work of the Lord: ‘Of old hast thou laid the foundation of the earth: and the heavens are the work of thy hands.’ That statement prompts some obvious questions. When was ‘of old’? What was there before the foundations were laid? And, most of all, what caused that sudden eruption into reality: did the event just happen, did it emerge from some mathematical improbability, or was it willed and if so by whom?

Such questions – of how time, the elements, life, and humankind find their origins – are at the roots of physics, of astronomy, of biology and, in a different sense, of belief itself. From the cosmos to the continents and from primeval slime to philosophy, everything evolves.

Science is an attempt to recover that process. The deeper it goes, the more indefinite its ideas tend to become but, for many of those who toil in its vineyards, obscurity increases the joy of the journey. As Sir Thomas Browne put it in Urn Burial, his 1658 speculation on human mortality: ‘What Song the Syrens sang, or what name Achilles assumed when he hid himself among women, though puzzling Questions are not beyond all conjecture.’ We may never hear the siren songs that coaxed the first stars, the first lives, or the first thoughts of the hereafter into existence but we can speculate about what they might have been and can now and again even come up with some evidence.

My own interests are in biology (and a small part of that subject, the genetics and evolution of snails – a topic that gets almost no further mention in these pages) but that discipline, like many others, rests on a foundation of chemistry and of physics. To put ourselves into true perspective most of this volume would have to be devoted to the Good Book’s first three words: ‘In the beginning . . . ’ with the adventures of Adam, Eve and their descendants reduced to a few lines in the final paragraph. Fortunately, I lack the knowledge (and the talent) needed to write even an abbreviated history of time. The Book of Genesis gets from the origin of the universe to that of Homo sapiens in fewer than seven hundred words. I cannot match its terseness, but this introductory chapter covers the same period at somewhat greater length. A small tale about a Big Bang and a rather larger one about the explosion of life is a preamble to the story of what makes us what we are. It reminds us that mankind lives in a minor solar system at the edge of a suburban galaxy, is in his physical frame scarcely distinguishable from the creatures that surround him, and – most of all – that he still understands rather little about his place in nature.

The universe itself, the product of that Bang, was once seen as proof that our home, and ourselves, were at the centre of everything. The Sun, Moon and stars were created to illuminate our ways: ‘And let them be for lights in the firmament of the heaven to give light upon the earth: and it was so.’ The cosmos was replete with theological lessons. A full moon looks flat, benign and almost supernatural. Medieval Christians saw it as a heavenly body, a jewel in the sky that in its divine exactness stood in stark contrast to the imperfect Earth, the realm of sin. In 1609 Galileo with his telescope put an end to that comforting thought, for he saw streaks of black thrown by mountain peaks in the lunar evening which showed that the Moon was a rugged world not much different from our own.

The truth about the origin of the Earth, and about when and how ‘the morning stars sang together, and all the sons of God shouted for joy’ is more remarkable than the scribes imagined. The ancient paradox that the sky has stars rather than a universal blaze of light is proof that the cosmos expanded from a central point and left vast gaps between the shards of its first explosion. It must hence have a finite age. That claim is in Genesis, but in its modern guise was put for- ward by the Catholic priest and physicist Georges Lemaître. He called the birthplace of the universe the ‘cosmic egg’. To ask what was there before that egg was laid is like asking what is north of the North Pole, for the question is based on a failure to understand the nature of time and space. In physics, as in philosophy, mere words can be deceptive.

At its inception the cosmos was dense, but is now dilute and as it expands becomes more so. When it set off on its journey is clear, for measurements of the relative positions of supernovae in relation to their age show that the famous Bang happened 13.77 billion years ago. The echoes of its explosion still sound through the universe. They warn of an uneasy past, a complex present and a gloomy future.

At the time of the Einsteinian revolution it was thought that all radiation came from radium and its relatives from within the Earth itself. In 1910 the German physicist Theodor Wulf took an apparatus to measure electrical charge (that generated by ionising radiation included) to the top of the Eiffel Tower to compare levels three hundred metres up with those on the lawn below. They decreased, as expected, but less than predicted from measures made between two spots the same distance apart at ground level. He suggested that perhaps extra waves were streaming in from space. The idea was ridiculed but soon the Austrian Victor Hess ascended in a balloon to more than five thousand metres and found that, far from the radiation fading to zero as its source was choked off by the atmosphere, there was a three-fold increase in output, not much diminished when the Sun was blocked by the Moon in a total eclipse. He had discovered cosmic rays. That was the first hint that the universe was filled with energy, a relic of its violent conception.

At the very beginning there existed a quantum world of uncertainty (‘a closed spherical space-time of zero radius’) where the quantum effects of gravity dominated. Its enormous power resolved itself in a sudden expansion. We understand much of the history of the cosmos from around ten to the minus forty-three seconds, when elementary particles collided with each other to give matter and antimatter, to the present day. During the first few minutes after the formative moment, neutrons and protons combined to form hydrogen and helium, together with traces of deuterium and lithium, and within no more than a few million years the heavier elements emerged as those lighter particles fused together. What had been a fiery mass of infant chemistry began to congeal under the influence of gravity into the stars and galaxies that fly apart today. Now and again they implode into themselves or explode into the void.

What sparked off the Bang is a mystery. For believers, God did it; but to most scientists that statement is not an answer but an excuse. As those who study the skies struggle to fit mathematics to reality, some of their suggestions are almost beyond comprehension. Might there be an infinity of other universes out there, some of them precise copies of our own? Why does the rate of cosmic inflation seem to be on the increase, rather than slowing down under the influence of gravity? Where is the undiscovered nine-tenths of the universe, the ‘dark matter’ and ‘dark energy’, that might cause its expansion to accelerate or slow down? We do not know; and the explanations, when they emerge, will be at an intellectual pole that most of us will never reach.

Excerpted from "The Serpent’s Promise: The Bible Interpreted Through Modern Science" by Steve Jones. Copyright © 2012 by Steve Jones. Reprinted by arrangement with Pegasus Books. All rights reserved.