Casey Kasem was the godfather of the listicle

Before Buzzfeed, before Total Request Live, even before Letterman's Top Ten, there was American Top 40 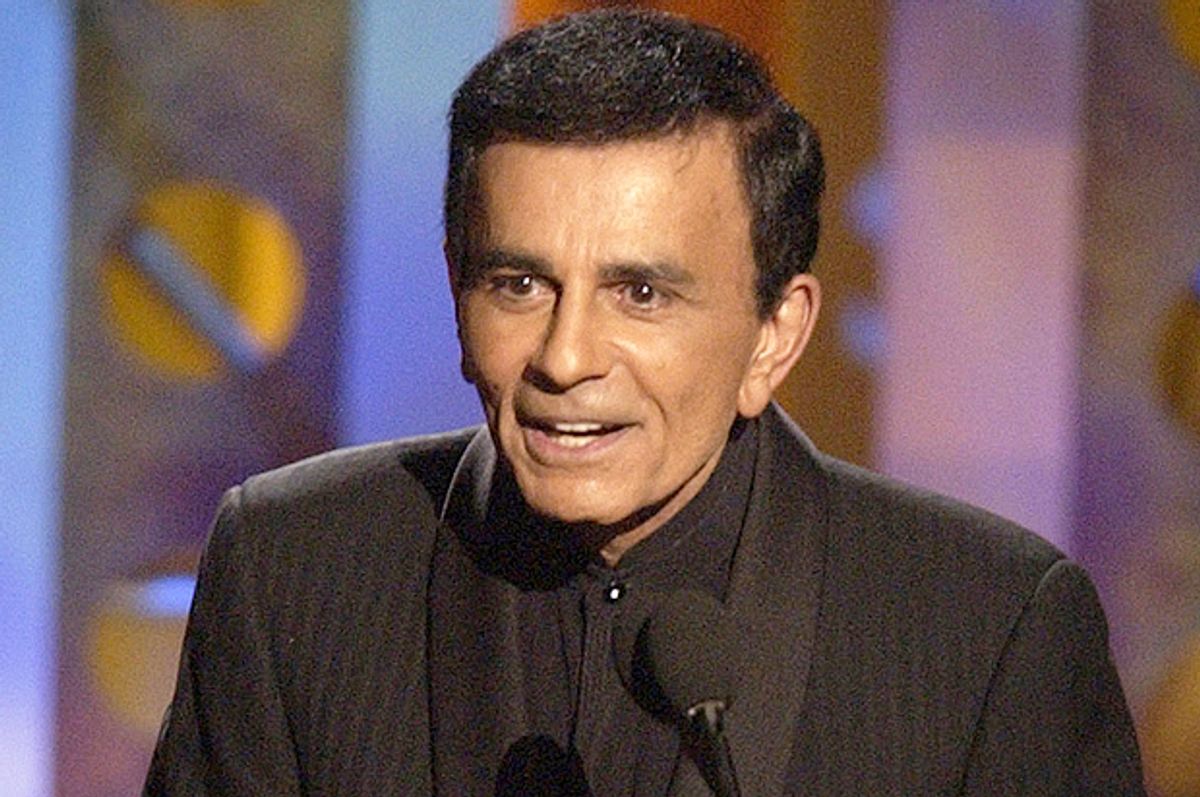 Before listicles clogged our Twitter feeds, before Entertainment Weekly splashed the “100 Greatest” across its cover, before there was MTV’s “TRL” or its “Top 20 Video Countdown,” even before David Letterman launched his Top Ten list, there was “American Top 40,” and there was Casey Kasem.

Kasem -- the radio DJ who died Sunday at the age of 82 -- did not invent the idea of ranking pop songs in order. But as Jon Pareles points out in a New York Times tribute to the host of “American Top 40,” the weekly broadcast of “the hits from coast to coast” that reached peak airwave saturation in the late 1970s and early 1980s, Kasem helped invent a show that was “as much psychological as musical.” This is especially true for the millions of impressionable Generation Xers who grew up listening to Kasem’s reliably polished and pleasant guide to the “most popular songs in the land.”

For many of us, “American Top 40” was the soundtrack to our trips to and from Sunday school; the background noise to weekend mornings spent sprawled on the living room carpet reading the Mini Page; the easiest, most accessible way to determine whether Queen’s “Another One Bites the Dust” was a “better” song than Air Supply’s “All Out of Love,” even though anyone with a working pair of ears could tell you that, obviously, it was. By regularly running through the top tracks, from 40 all the way up to No. 1, “American Top 40” and Kasem subtly shaped the way we organized our thoughts about pop music and pop culture more generally. Thus began our lifelong fixation with the list.

There is something deceptively comprehensive and therefore comforting about a list. And if “American Top 40” was anything to people who came of age in the ’70s and ’80s, it was a comforting -- a smooth, structured, consistent FM-radio thread that ran, week in, week out, throughout the idle moments of our childhood. The songs that made it into Casey’s countdown, determined by Billboard rankings, were not necessarily the greatest songs of their era. Some of the most thriving, exciting subgenres in American music -- punk, alt-rock, hip-hop -- were largely ignored by AT40 because their artists were too far out of the mainstream to qualify as chart-toppers. To put it more bluntly: a lot of the songs that Casey was obliged to highlight were wretched, songs so cheese-tastic that you hear them now and not only can’t remember hearing them then, but can’t conceive of how they were even allowed to exist.

As an unrepentant nostalgist, I still listen to episodes “American Top 40: The 80s,” the still-airing, syndicated version of archived Casey Kasem broadcasts from that decade. This week’s installment was a flashback to the countdown from June 13, 1981, which featured, in the No. 21 spot, the Lee Ritenour song “Is It You?,” a song so non-threatening that it makes Kenny G. sound like Insane Clown Posse by comparison. Seriously: listen to that song. It is a watered-down white wine spritzer in music form. How was it ever, ever a hit? I don’t know the answer. But I know that hearing that song explains why I love listening to old episodes of “American Top 40”: because every iteration of “Casey’s coast to coast” created a tiny time capsule of what mainstream America actually sounded like during that particular week.

I can fire up an ’80s station on Pandora or iTunes Radio right now and I can just about guarantee what I will get: a parade of songs from that era that are pretty good but also so recognizable that they’ve been leached of their nostalgic powers. Thanks to TV commercials, grocery store PA systems, satellite and online radio and the fact that oldies stations now play the songs that those of us in our thirties and forties once considered new, I still hear Duran Duran, the Human League and the Thompson Twins on a surprisingly regular basis.

But it is not every day that I hear “Winning” by Santana, No. 26 in “this week’s” 1981 countdown and a song that is aurally synonymous with sitting in the sticky back seat of my parents’ Pontiac. My ears rarely come in contact with “Sweetheart” by Frankie and the Knockouts (No. 10), a jaunty little sing-a-longer that transports me directly to the vinyl Toys R Us backyard swimming pool where I spent many of my summer afternoons in 1981. And despite its ubiquity 33 summers ago, I pretty much never hear “Bette Davis Eyes” by Kim Carnes anymore. But on “American Top 40,” the fact that it was then and is now, again, via the magic of syndicated-radio time travel, the No. 1 song in the country can still come as a sweet surprise.

That’s the other thing about “American Top 40” circa the ’70s and ’80s: you always had to listen to the end because you needed to know what was No. 1. Unless your parents were Billboard magazine subscribers -- which was not likely, unless you’re reading this and your name is Rashida Jones -- the easiest way to find out which songs were popular was by listening to what Casey Kasem told us.

There was no Internet that could confirm in a few keystrokes which songs had made the top 10.  “American Top 40” wasn’t a DVR-able TV show that could be recorded or rewound if your parents made you turn it off right when Casey got to No. 12. You just had to stay parked next to a radio and hold out for the answers. Kasem’s famous sign-off for “American Top 40” was “Keep your feet on the ground, and keep reaching for the stars.” But the philosophy that best describes how one listened to the show was: “Keep your butt where it is, and keep waiting.”

That sense of anticipation and the sense of satisfaction that resulted from ultimately knowing where each track ranked cemented list-making in the American cultural DNA. Again, lists of popular songs were made before “American Top 40” existed. “American Bandstand” used to do a little of that, as just one example. But the list exploded and expanded as media exploded and expanded in the decades that followed. “American Top 40” spawned “America’s Top 10,” a half-hour TV show, also hosted by Kasem, that served as a pre-MTV, visual version of the radio show. Local radio stations hosted their own nightly countdowns. Once MTV Moonman-landed in 1981, it eventually gave us its top video countdown and, later, “Total Request Live.”

Pop culture-focused lists have proliferated even further in the digital era, so much so that it’s now impossible to scan Facebook or Twitter without tripping into a debate over one of the seemingly millions of lists issued daily by Forbes or cranked out by Buzzfeed or used to anchor an interactive bracket from Vulture. Some of these lists have more merit than others, just like some “American Top 40” countdowns have more merit than others. (This one, from July of 1984, seems largely solid. What, you’re going to argue with Prince’s “When Doves Cry” being No. 1?) But they serve the same function that AT 40 did for us back in the day -- they summarize, organize, break things down -- and they also spark debate, which is not something Casey Kasem, with his intentionally innocuous, good-spirited approach, may have imagined he was doing when he first went on with the countdown back in 1970. Or maybe he did. Like all human beings, Kasem had a darker side, you know. (Speaking of: Do you remember, Gen Xers, when you first realized that the voice of “American Top 40” was also the voice of Shaggy from “Scooby-Doo”? Do you remember the sheer shock of it? “This nice, fatherly man who lets me know how the Pointer Sisters’ “He’s So Shy” is faring on the charts is the same cartoon hippie who sounds like he’s been sucking on marijuana joints and Pop Rocks??”)

Just like listening to “American Top 40” flashbacks does, online lists often appeal to our most nostalgia-prone instincts. Buzzfeed’s Rewind vertical was basically designed around that premise. Lists simplify things and make us believe that we once lived in a time when things were simpler, because -- just like top 40 radio -- they tend to filter out all the weird, unsavory, unconventional stuff that doesn’t quite rank.